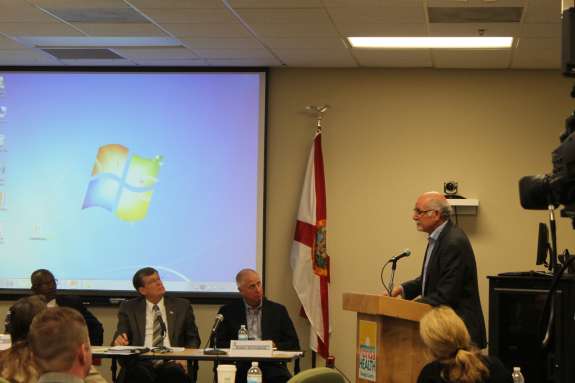 James Coffin, executive director of the Interfaith Council of Central Florida, urged the hospital commission to consider health care for the poor.

The commission met today in Orlando. The nine-member group delved through detailed hospital statistics, and started brainstorming ideas for how to reform hospital payments.

“You start building a group of measurements that ultimately effectively grade the hospital,” Kuntz said. “The task would be to work with the hospitals, assuming more of them would be willing to work with us than so far have been.”

Dr. Jason Rosenberg said hospitals could be pressured to send patients away from the ER to urgent care centers, for example.

“There has to be a disincentive. If someone comes into the emergency room with a simple concern, you may tell them we’ll pay you to triage them and send them somewhere else, but we’re not gonna pay you to take care of them because you don’t do that well. But it’s not the patient, because the patient has no cost sensitivity and no understanding of quality.”

Ryan Fitch, a financial analyst with the state, said Florida wants hospitals to be profitable.

“If you’re struggling, the first place you cut is costs,” Fitch said. “That almost immediately goes to patient care, assuming there’s no excess to begin with. And then all of a sudden the quality drops. That’s the theory, anyway.”

The commission will meet next week in Tallahassee. They will propose changes in hospital funding for when the federal Low Income Pool dollars go away.

Members of the faith community also urged Governor Rick Scott’s commission on hospitals not to forget about the health care needs of the poor.

“I think what we’re talking about today is a means to an end,” said James Coffin, the executive director of the Interfaith Council of Central Florida. “But we must not lose sight of the end. So even if we’re able to make hospitals more effective, more efficient, we still have nearly a million people who fall through the cracks, to whom we have some kind of social obligation.”