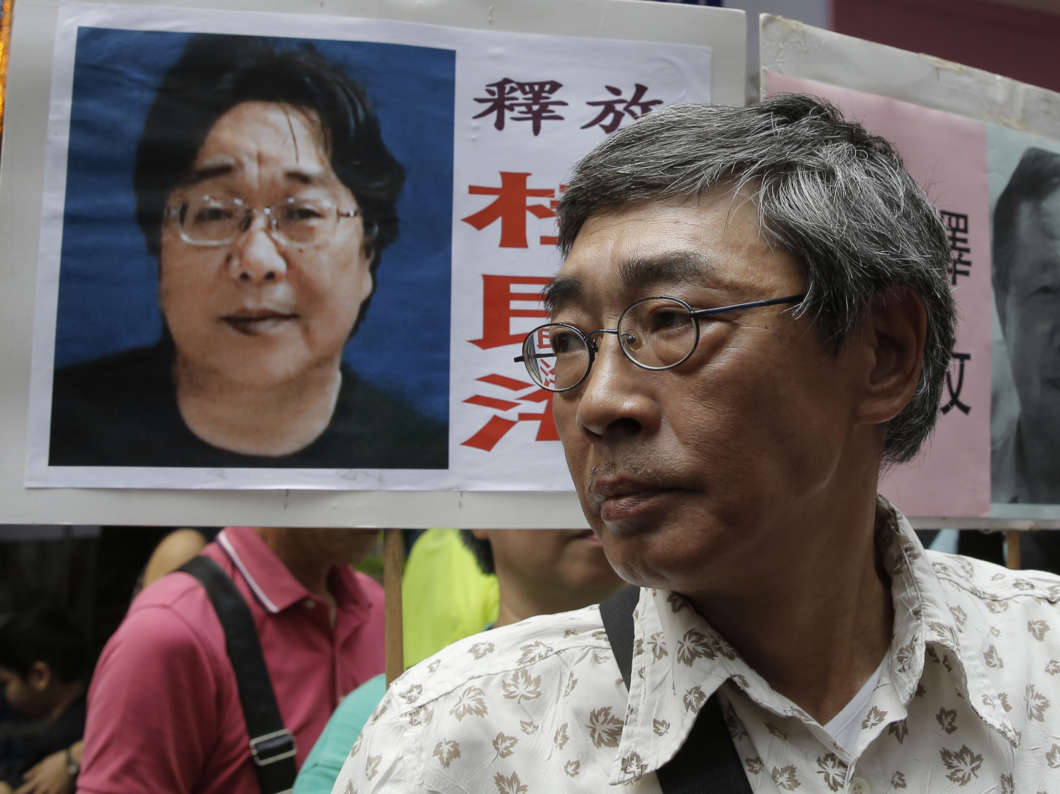 Freed Hong Kong bookseller Lam Wing-kee stands next to a placard with a picture of bookseller Gui Minhai, in front of his book store in Hong Kong in June 2016.
Image credit: Kin Cheung

A well-known Hong Kong bookseller who published critical and sometimes titillating volumes about Chinese leaders and who disappeared in China more than two years ago has been quietly sentenced to a decade in prison for passing on intelligence to people overseas.

In its brief judgement published online Monday, the court in the Chinese port city of Ningbo said that Gui Minhai, a Swedish citizen since 1996, had also voluntarily renounced his Swedish citizenship and recovered his Chinese citizenship in 2018.

Gui has been detained on and off in an unknown location within China since 2015, when he was kidnapped by Chinese security officers while vacationing in Thailand and forcibly brought to China. Swedish diplomats say they have been regularly denied consular access to Gui since his detention.

Shortly after his disappearance in Thailand, Gui resurfaced in a nationally-televised segment from China’s state broadcaster, in which he said he had returned to China of his own volition to face manslaughter charges in a deadly 2003 drunk driving accident Gui had allegedly been part of.

At least two acquaintances of Gui told NPR that they had heard about the traffic accident before the Chinese report. However, many of those close to Gui said his statement that he had voluntarily left his vacation early to turn himself into Chinese authorities had been coerced. China has an extensive history of televising forced confessions.

“You can’t imagine the pressure China can put on you. I still have occasional nightmares. Sometimes I wake up screaming in my sleep,” said Lam Wing-kee, who like Gui, was once a popular Hong Kong publisher scathing and sometimes salacious political volumes about China’s Communist Party leadership.

Around the same that Gui was kidnapped in Thailand, Lam was stopped at the border of Hong Kong and mainland China, blindfolded, and sent by train to China where he endured eight months of interrogation. In total, five booksellers in Hong Kong were spirited to mainland China that year and questioned about their publishing activities.

“They terrorize you,” said Lam of the Chinese security agents who questioned him. “They can accuse you of violating national security, they can link any crime to you. They say they can make you disappear.”

Lam was allowed to return to Hong Kong after his interrogation ended, by promising to give his captors information about his bookstore’s authors and customers. Instead, he went public with his kidnapping as soon as he reached Hong Kong. Lam now lives in Taiwan and is planning to reopen his bookstore in its capital.

Gui wasn’t so lucky. Sometime before 2018, he was released from custody but kept under house arrest in the Chinese city of Ningbo, where he was born. Still, he managed to sneak out an entire volume of his new poetry to his daughter Angela Gui, also Swedish, to be published this year.

Then, in January 2018, Gui was detained again. He had been on board a train bound for Beijing in the presence of two Swedish diplomats when about ten Chinese plainclothes officers grabbed Gui and took him away, his daughter told NPR.

“Gui published a lot of books about the Chinese top leaders, about Chinese politics and human rights, and that’s the reason why the Chinese Communist Party is so angry at him,” said Teng Biao, a human rights lawyer now based in the United States who helped co-found the Independent Chinese PEN Center, a literary organization, with Gui.

Sweden has been outspoken about Gui’s double detentions, causing a sharp rift between Beijing and Stockholm.

“The Chinese embassy have been lashing out at and attacking verbally Swedish media, newspaper, television, anyone who has said anything critical about China or asked for our citizen to be free,” said Magnus Fiskesjö, an assistant professor of anthropology at Cornell University. “The whole setup seems to be of intimidation…which has given us a view of the new China, which is intolerant of any criticism.”

Fiskesjö first met Gui – then a rising young poet – in the 1980s, while serving as a diplomat in the Swedish embassy in Beijing. “He was writing really bold, exciting stuff,” Fiskesjö remembers.

At a recent rally, Fiskesjö read aloud one of Gui’s poems, written in 1986, about Gui’s longing to visit Greece. The poem ends with a lamentation and these words:

the smiling face of the tortured emerges

Fiskesjö wasn’t sure what the line was about when he first read it. Now he thinks of Gui Minhai.