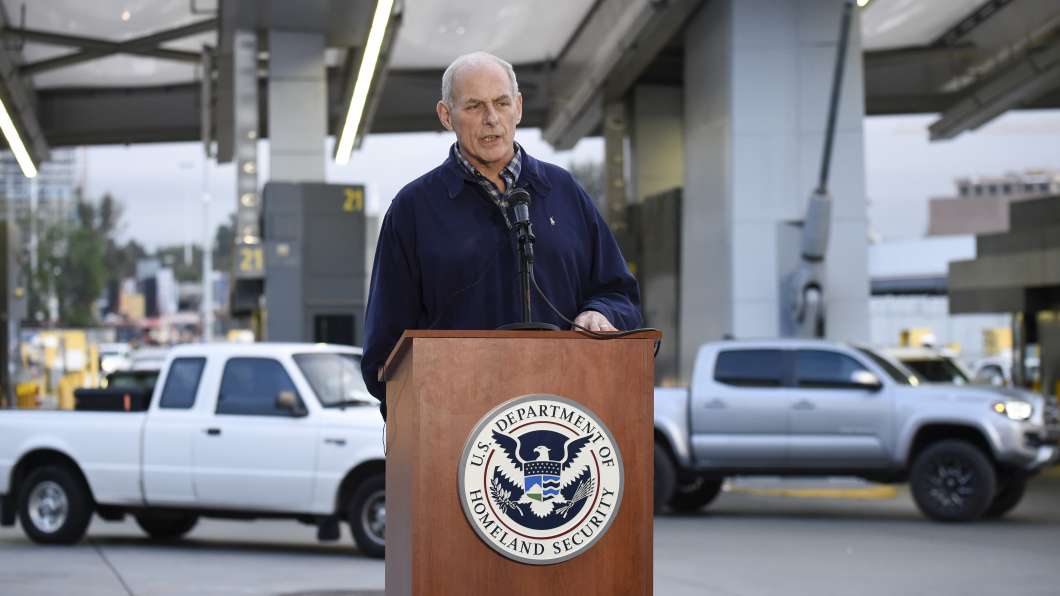 Memos signed by Secretary of Homeland Security John Kelly, seen at a news conference earlier this month at the San Ysidro Port of Entry in San Diego, lay out a number of immigration-enforcement measures, such as expedited deportation proceedings for unauthorized immigrants who have been in the U.S. illegally for up to two years.
Image credit: Denis Poroy

Homeland Security Secretary John Kelly unveiled new policies on Tuesday that are aimed at detaining and deporting more immigrants who are in the U.S. illegally.

The two memos, signed by Kelly, lay out a series of steps the department plans to take to implement President Trump’s executive orders from late January. Those orders called for increased border security and stricter enforcement of the nation’s immigration laws.

While the new policies call for a “surge” in the deployment of immigration judges and other personnel, DHS officials said the agency is not planning mass deportations and that many of the new policies would take time to implement.

“We don’t need a sense of panic necessarily in these communities,” one official said in a conference call with reporters.

Under the new rules, the department would greatly expand the number of immigrants who are prioritized for removal. This includes unauthorized immigrants who may have committed a crime but not been charged, and anyone an immigration officer deems a risk to public safety or national security. The policies also make it more difficult for migrants to claim asylum.

Homeland Security officials said the policies would not affect Deferred Action for Childhood Arrivals, the Obama administration policy that offered protection from deportation for people who were brought to the U.S. illegally as children.

In addition, the policies call for an expansion of a federal program that enlists state and local law enforcement to enforce immigration laws.

That partnership program has come under fire from critics who allege that it led to racial profiling. The federal government terminated one such agreement with Maricopa County Sheriff Joe Arpaio in 2011 after the Justice Department found that county officers unlawfully stopped and detained Latinos.

On Tuesday, DHS called the program “a highly successful force multiplier.” Officials said local officers go through extensive training and that racial profiling would not be tolerated.