“Know your status, so you can enjoy life” – Rick Kann gives test results with comfort 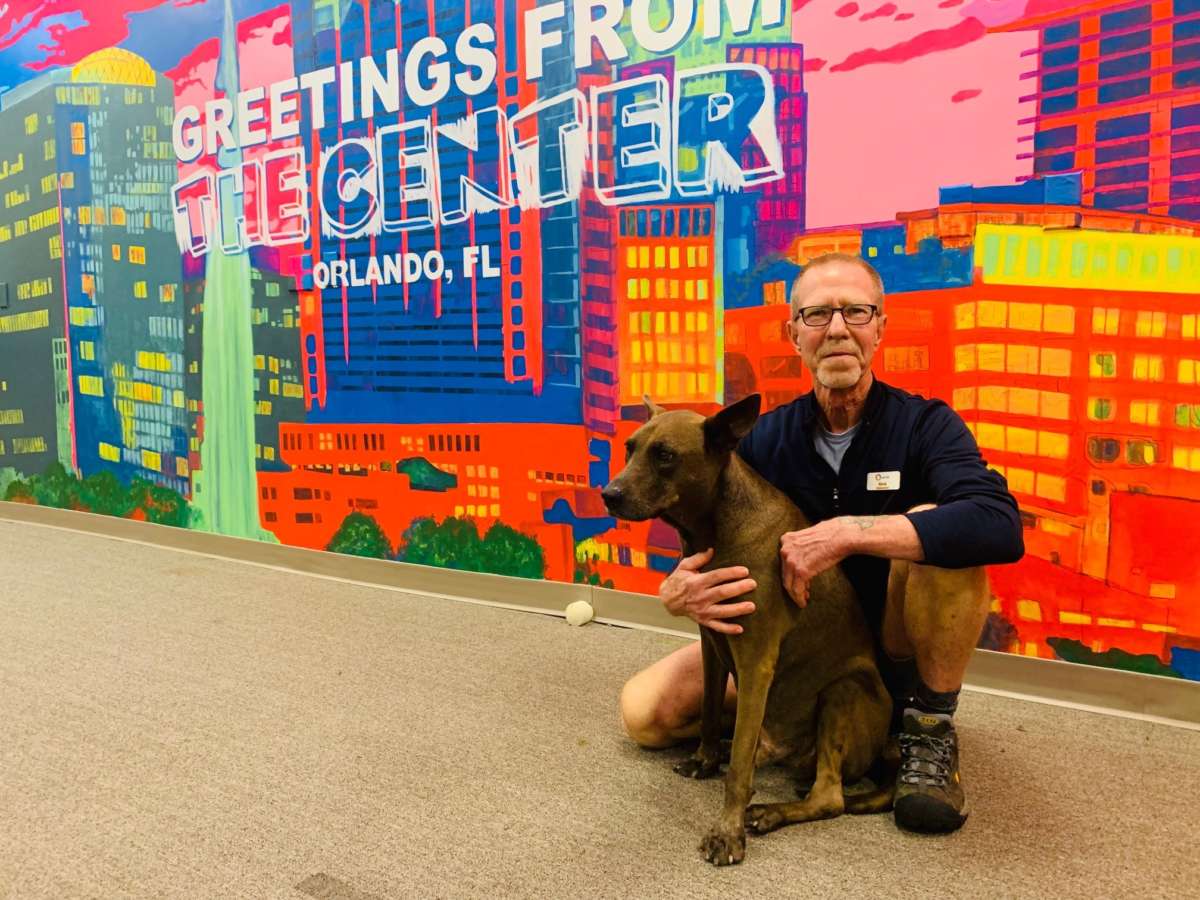 Rick Kann and his dog Otis at the LGBT Center in Orlando. (via Talia Blake/WMFE)

We continue our holiday series today highlighting people working to make the world a better place with a story about Rick Kann, a volunteer at the LGBT+ Center in Orlando.

Rick Kann volunteers at the LGBT Center working the front desk and testing people for HIV and Hep-C. (via Talia Blake/WMFE)

Originally, Kann was looking for a way to meet new people when he became a volunteer, but said when he saw the kind of work being done at The Center it awakened a drive in him to help people. So, after retiring from a 30-year career in public education, Kann started volunteering more of his time.

At the Center, he works either at the front desk greeting and directing people to where they need to go, or as a volunteer tester for HIV and Hepatitis-C.  “I happened to be here on a Sunday morning, I was one of the I was the tester for the day,” Kann said.”And the front desk staff wasn’t here yet. But I got here early, and it was about quarter till 10. We open a 10 on Sundays. There was a woman outside she was waiting to come in. You could tell it was written all over her that she just needed to get in and get that test. And so it just became really clear to me that we’re providing a service, that you can’t even begin to imagine what it’s doing for people. So I thought, yeah, if I can be a part of that, and help help bring some smile to somebody’s day, perfect.”

According to the Center for Disease Control and Prevention, nearly 1.9 million people in the U.S are living with HIV, including over 110,000  in Florida. Kann said he’s been certified to administer the test for at least six years now. “I’ve done easily hundreds of tests. The ones you get that are reactive, or what people like to say ‘positive,’ they’re tough. I’m glad to be somebody who can provide some comfort to somebody who’s going through that,” said Kann.

According to Kann, education is the best way to help someone through the process of receiving their results. “Letting them know that look, this is not the death sentence. It was when I was coming up back in the 80s,” Kann said. “If you stay on your medication, and you’re good about taking care of your health, just overall, you can live to be 100 years old and not have a problem. You can factor it within a couple of months, become what they call undetectable, which means you can no longer transmit the virus.” Kann said it’s important to help calm the person who just received the bad news so they can get to a place where they can start making some informed choices about what they want to do next.

Otis peaks from behind Kann’s desk as he answers the phone. (via Talia Blake/WMFE)

One way Kann helps bring even more comfort to The Center, is with his dog Otis. “He just kind of sets the tone of like, okay, this is going to be a comfortable place. If you got treats in your pocket. I’m going to love you even more.” Kann said he trained Otis as a therapy dog some year ago so they could visit nursing homes and hospitals. “And so it was a great fit here. In fact, he’s been called on many times when people just needed something that they needed to hold on to it was warm and soft and cuddly,” Kann said.

This holiday season, testing for HIV and Hep-C have been on the rise, according to Kann. “I don’t know what the reason is, but we’ve been doing more tests in the past month or so than we have for a while,” he said. “And it’s nice to see because I want people to know their status. That way they can just get out there and enjoy life.”