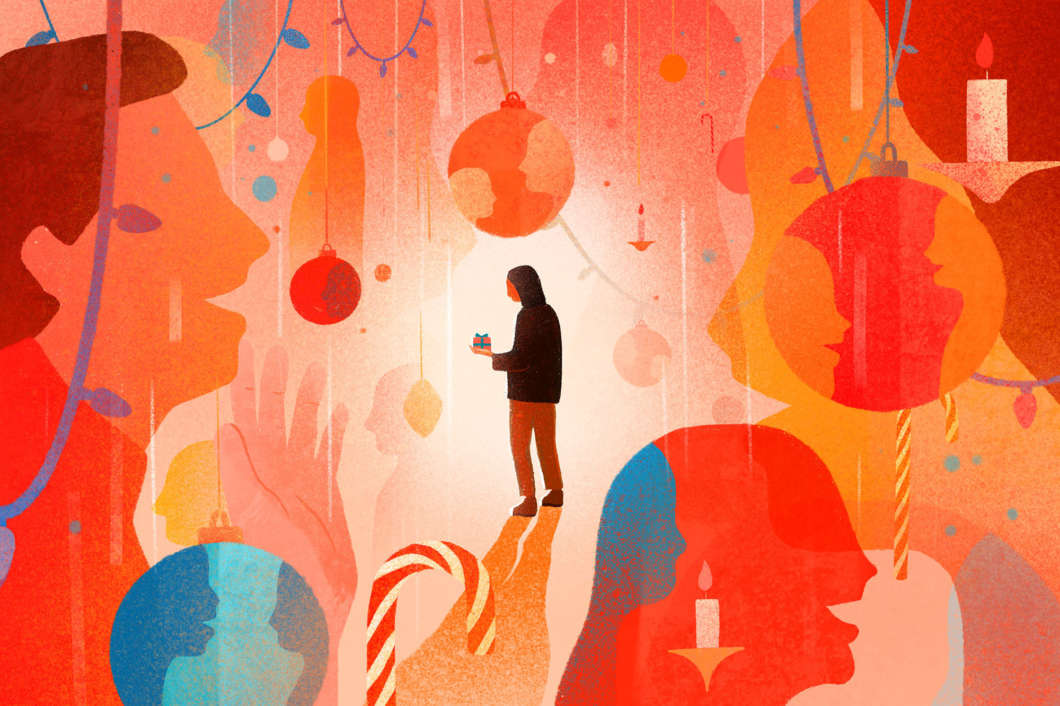 “If I say the word ‘circus,’ it means I’m ready to leave the party.” That’s what Angie Ebba, 39, of Portland, Ore., tells close friends when she’s at a holiday soiree.

It might sound strange, but coming up with a code word is one way Ebba tames her social anxiety. “If I need to leave, having a word I can slip into conversation is a discreet way to let my friends know,” Ebba explains.

Most of us feel socially uncomfortable from time to time, but for Ebba, the anxiety of attending a party triggers a heart-thumping, face-flushing flood of fear and a cascade of worries. Her pulse races. Her mind goes blank.

“I worry I’ll embarrass myself, and if I’m at the party with someone else, I worry they’ll be embarrassed by me,” she confesses.

The problem is not Ebba — it’s her anxiety. What she’s feeling is more than social awkwardness. The gut-wrenching anxiety and harsh self-criticism of social anxiety disorder stops some of the estimated 15 million Americans who have it from applying for jobs, initiating friendships and, during this time of year, attending holiday parties.

Whereas people with generalized anxiety experience fear-driven worries about life circumstances, those with social anxiety see themselves through a distorted lens of self-doubt, shame and a fear that others are scrutinizing and judging them harshly, researchers say.

“Social anxiety hinges on the mistaken belief that we’re flawed in some way,” explains Ellen Hendriksen, a clinical psychologist at Boston University’s Center for Anxiety and Related Disorders. This extreme social uneasiness can run in families and can also arise after childhood experiences such as trauma or abuse, according to the National Institute of Mental Health.

When we’re caught in the grip of social anxiety, we may worry that others will poke fun at what we’ve said, disdain our appearance or shun us, which can feel like middle school all over again.

Hendriksen says such worries often lead to “safety behaviors” — attempts to keep “fatal flaws” hidden. We avoid eye contact or focus on texts or emails, instead of talking with other people at the party. Or we head off to another room to sit alone, removed from the larger group.

Research by clinical psychologist David Moscovitch, a professor at the University of Waterloo, in Ontario, Canada, suggests that social anxiety disorder’s fears loosely fit into four broad categories: worries about perceived flaws in physical appearance, perceived flaws in social skills and behavior, perceived personality flaws, and a perceived inability to conceal all that anxiety. In people with social anxiety disorder, these fears persist for six months or more.

Struggling with more than one of these types of worries isn’t uncommon, Moscovitch says, and sometimes the anxiety doesn’t permeate every social situation.

Ebba, for example, finds her heart racing and voice falling flat at large get-togethers but feels comfortable in small gatherings of close friends. Others may feel fine mingling at a cocktail party but get nauseated, sweaty or lightheaded at the prospect of giving a speech.

However social anxiety manifests, “the underlying fear is that our fatal flaws will be exposed, causing others to reject us,” says Hendriksen.

This persistent, fictional belief that one is a fraud and is about to be mocked and abandoned leads to “flight behaviors,” says Stefan Hofmann, a clinical psychologist and anxiety researcher at Boston University.

In the short term, fleeing situations and people that provoke anxiety works to keep the heart rate low and steady, he says. But in the long run, this tactic only increases the unaddressed anxiety. And loneliness has its own perils.

A better solution, Hofmann suggests, is finding ways to tolerate, rather than flee, the painful emotion. Psychotherapy — especially cognitive behavioral therapy sessions, which involve examining one’s self-limiting thoughts, worrisome feelings and how they are connected to avoidance behaviors — can be a good, safe place to practice facing fears.

Some people find that self-help tools, such as mindfulness-based stress reduction and self-compassion exercises, can help quiet their negative internal chatter. While it’s unlikely these techniques will erase anxiety forever, Hofmann says, they can help social worriers weather holiday get-togethers.

“Before I attend a holiday party, I come up with a few talking points,” Ebba says. Her script may include anything from funny pet stories to upcoming holiday plans. “When I know what I’m going to say, I feel more prepared,” she says. That calms her jitters.

Referred to as “problem-focused coping” by social scientists, this strategy reduces her anxiety by directly addressing the immediate problem: conversational uncertainty.

Do a kind deed

Performing acts of kindness can also ease social anxiety, researchers say. In fact, a 2015 study revealed kind gestures often elicit praise and appreciation from others, which can counteract the fear of rejection.

“I’ll offer to help in the kitchen and ask if I can make myself useful,” Ebba says. Make coffee; chop a few carrots; wash a dish or two — anything that helps the busy host. They’ll be grateful and you’ll soon forget your nerves.

Eliciting positive emotions in yourself and others can help extinguish negative ones; studies show that feelings such as kindness and happiness can encourage exploration and curiosity, which can foster self-acceptance, Hofmann says.

Talk to yourself, friend to friend

Even with a lot of prep, holiday parties have a way of getting the best of us all. Maybe everything feels under control until a friend puts you on the spot — “Can you give a holiday toast?” If this happens and you feel uneasy, Hofmann recommends a deep breath and a quick technique called “cognitive reappraisal.”

“Ask yourself why you’re upset and whether or not it’s justified,” Hofmann suggests. Still gripped by fear? Try giving yourself a pep talk (silently) in the third person. In a 2017 study, researchers found this simple act could provide psychological distance from an unwanted upwelling of emotion — and that can help you feel more in control of any stressful situation.

Self-directed kindness can be an effective treatment, too, according to research by California psychologist Kelly Werner and her colleagues. “Be kind to yourself when you’re hurting or when you’ve made a mistake,” Werner tells her patients with social anxiety.

Remind yourself: “I am not alone. Other people feel anxious and awkward in social situations, too.” Just repeating those words, she says, can stir feelings of warmth and compassion for yourself and others.

Ebba say she often talks herself through her anxiety. “I repeat phrases, such as ‘I will get through this’ and ‘I’m doing fine,'” she says.

In the past few years, she says, a combination of therapy, self-help books and talks with friends has helped her gain more confidence — and ease. Practice helps.

Instead of dreading this year’s get-togethers, Ebba is facing her fears. “There’s a holiday party coming up and only a handful of people I know will be there,” she says. To cope with her social worries ahead of time, she has identified two friends she can count on throughout the evening, and she plans to tell them about her code word.

Maybe you know someone with social anxiety and want to be supportive, but don’t know how. The National Social Anxiety Center recommends validating your loved one’s feelings first. It might seem reassuring to say, “There’s nothing to worry about,” but for a person riddled with fear, those words aren’t calming.

Instead, invite your pal to tell you what they’re specifically worried about, and help them reframe the situation: “What’s the worst thing that could happen?” or “How much will this matter one year from now?” Even better, invite your friend to share the advice they would offer to someone facing similar struggles. That can broaden perspective and may even help them accept their own advice.

Remember: Social anxiety isn’t easily cured, like a tension headache; it’s a process that can take time. “It’s a growing experience,” Ebba says. And the more often she has a positive experience, the less intense her fear becomes.