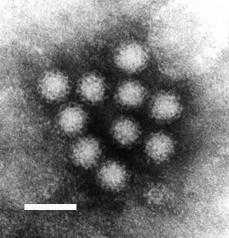 The norovirus could be to blame for sickening 55 office workers in Maitland this week.

The U.S. Department of Homeland Security was notified that 55 Maitland office workers got sick at an office holiday party this week.

The luncheon put 20 people in the hospital, including a pregnant woman.

If the Maitland outbreak happened in 2013, it would have ranked No. 8 on Food Safety News’ list of top 10 largest outbreaks.

“When you get 50 people or more sick, it’s a big outbreak,” Marler said. “I would call it more moderate because I’ve been involved in the Jack in the Box outbreak and that was E. coli and there were several hundred.”

Marler thinks its Norovirus – the same virus that infected nearly 200 passengers on a New Zealand cruise ship this week.

Dain Weister with the Orange County Department of Health said it could take up to a month for doctors to trace the source. Weister said bacterial toxins, like botulism or staph, are likely culprits.

“Our epidemiologist aren’t sure what the cause is, but it certainly, toxins are something that would cause people to get sick quickly like this,” Weister said. “Because this was within three or four hours.”

The fire department said although some patients experienced severe symptoms, all are in stable condition. A total of 700 people went to the office party.