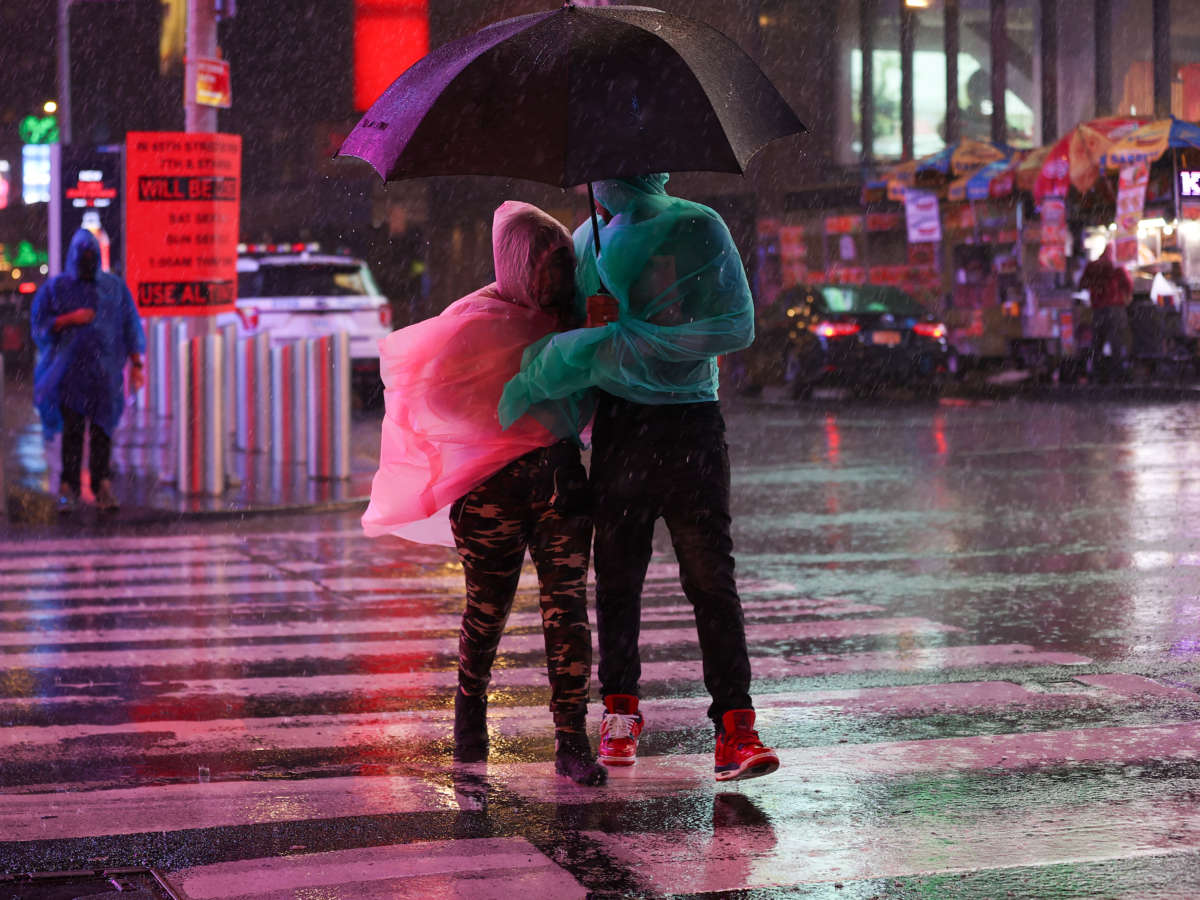 People out in the street during heavy rain and storm at Times Square in New York City, United States on September 1, 2021.
Image credit: Tayfun Coskun

The summer of wild weather continues.

The remnants of Hurricane Ida brought heavy winds and dumped record levels of rain to the East Coast Wednesday into Thursday. Floodwaters halted road, train, and air traffic in New York and New Jersey. It’s also being blamed for the death of at least two people in both states.

The rain in New York City was so heavy that for the first time the city was under a flash-flood emergency, the most serious rainfall scenario.

States of emergency were declared in New York City, New York state and New Jersey due to the storms.

A new record rainfall of 3.15 inches fell in Central Park in one hour, according to the National Weather Service. This level surpasses the 1.94 inches that fell in one hour during Tropical Storm Henri last month, which at the time, was thought to be the most ever recorded in the park.

Between 6 and 10 inches of rain fell over the course of several hours.

Waist-level floodwaters caused significant travel delays throughout the city. Most of the city’s subway lines had to be shut down, leaving commuters stranded and needing to be rescued by the fire department.

Authorities pleaded with travelers not to attempt to drive through flooded roadways, but the New York City Fire Department reported needing to rescue several motorists. To prevent further issues for emergency responders, the city issued a travel ban on all non-essential vehicles from New York City streets and highways until 5 a.m. Thursday.

Videos shared on Twitter show shocking scenes from Brooklyn to Staten Island during the storm.

Along the city’s busy streets and highways one bus driver navigated floodwaters in and outside his vehicle to get passengers to safety. In other areas, water was recorded pouring down the stairway of one apartment building, and into an underground subway station.

At least one man was seen making the most of the weather. A TikTok video shows an unbothered man floating on a raft smoking a hookah.

Newark Airport was temporarily evacuated Wednesday evening after flood water got into the Terminal B baggage claim and ground-level floors of the airport. All flights in and out of the airport were cancelled for a time.

In Passaic, New Jersey, the city’s Mayor Hector Lora reported at least one man in his 70s died after the car he was riding in was overtaken by water.

Rain was not New Jersey’s only concern Wednesday.

“Just spoke with Harrison Township Mayor Lou Manzo about the devastating tornado that ripped through the Mullica Hill community and surrounding area tonight,” New Jersey Gov. Phil Murphy tweeted. “We’re closely monitoring the situation and will do whatever is needed to support the response & recovery in the days ahead.”

Flooding was also a serious issue.

Residents in parts of Trenton, New Jersey were urged to evacuate after city officials said the Delaware River posed a serious flooding risk–the first of its kind in 10 years. The effected areas impacted at least 500 homes.

Captain Jason Astbury of the Trenton Police Department told those residents they should at least be prepared to be gone for potentially two days until floodwaters are cleared.

Multiple tornados also touched down in Maryland and Pennsylvania.

Local news channel, ABC6, reported that one woman died in southeastern Pennsylvania after a tree came down onto a home.

As the sun rises on Thursday many residents in the Northeast are still in danger.