Historic Eatonville One Step Closer in Development That Could Change Area 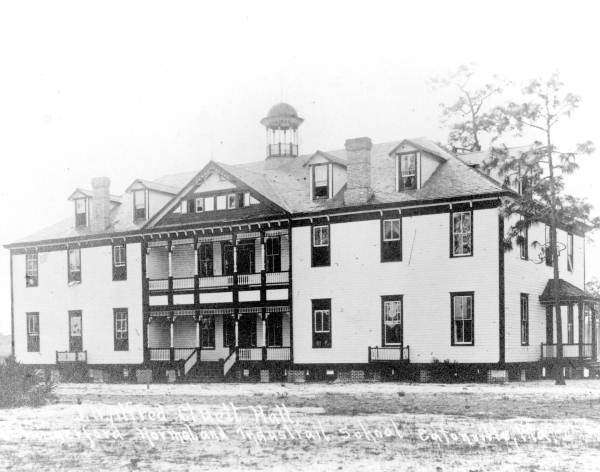 A photo of the Robert Hungerford Vocational School in Eatonville, circa 1914. Photo: Illuminati Noir.

The historic black town of Eatonville is one step closer to a major development that could change the area. A town committee on Monday will accept final pitches from developers for the last remaining town gem: land that was once home to the town’s historic boarding school.

Here are answers to some questions to understand what is happening:

What is the land that is considered that town’s last remaining gem?

The land is about 99 acres on which the Robert Hungerford Vocational High School, once one of the nation’s only private boarding and technical schools for blacks, sits. The property was originally part of more than 160 acres of land and swamp that were donated to Eatonville in 1897 by a white man named Robert Hungerford. His primary goal was to see a school built on part of it to educate blacks, and that happened. When desegregation occurred, the school’s funding and its very identity were compromised. It ended up under ownership of Orange County Public Schools. The school board purchased the land in 1951 for $16,571. Now, looking back, that was a steal, but the town of Eatonville was unable to purchase the land at the time and the Hungerford Trust was unable to keep up the boarding school. Also, desegregation rules required that Orange County have a black school in the district whereas it had never had one before. Since then, the school board has sold off much of the land. What is up for discussion today are the remaining 99 acres.

So, what has happened with these 99 acres?

The Hungerford Vocational High School still sits on it. The Orange County school board closed it to school operations some time ago. Right now the space is used for community events. In recent years there’s been a push to turn that land into something. In March, the process to accept requests for proposals from developers began. The Orange County school board and the Town of Eatonville are working together to find a developer. The town has formed a committee to narrow down developers and send recommendations for the town council to take a vote.

What is the vision now for that land?

It has shifted in the past few years due to a turnover in leadership. Eatonville has seen three different mayors in the past two years—each with ambitious ideas for what he believed the land should become. Each time the biggest question has been: which is more important? Accepting any development proposal on that land and benefiting from the revenue? Or thinking strategically about what kind of development to have on that land and ways to preserve the town’s history?

The current mayor is Eddie Cole has ideas to develop the land into something that can benefit residents and tourists.  He says he would like to see a technical school to get more unemployed youth with some sort of trade.

“But I’m also hoping that maybe we’ll have a bank and maybe we have some homes around the lake—just a gamut of different things that we can feel pleased about and not lose this historical heritage.”

Are there any guidelines for what the actual land can be?

The Hungerford Trust sold the land to the Orange County school board under the condition that it be used for educational purposes. That’s the deed restriction, actually. The Trust has the right to take the land back if it is not developed into something with some sort of educational component. That been a source of contention. There was a lawsuit filed against the Hungerford Trust, which has kept the deed to the property, to get the deed restrictions lifted.

To hear more on this story, click the ‘Play Audio’ button.