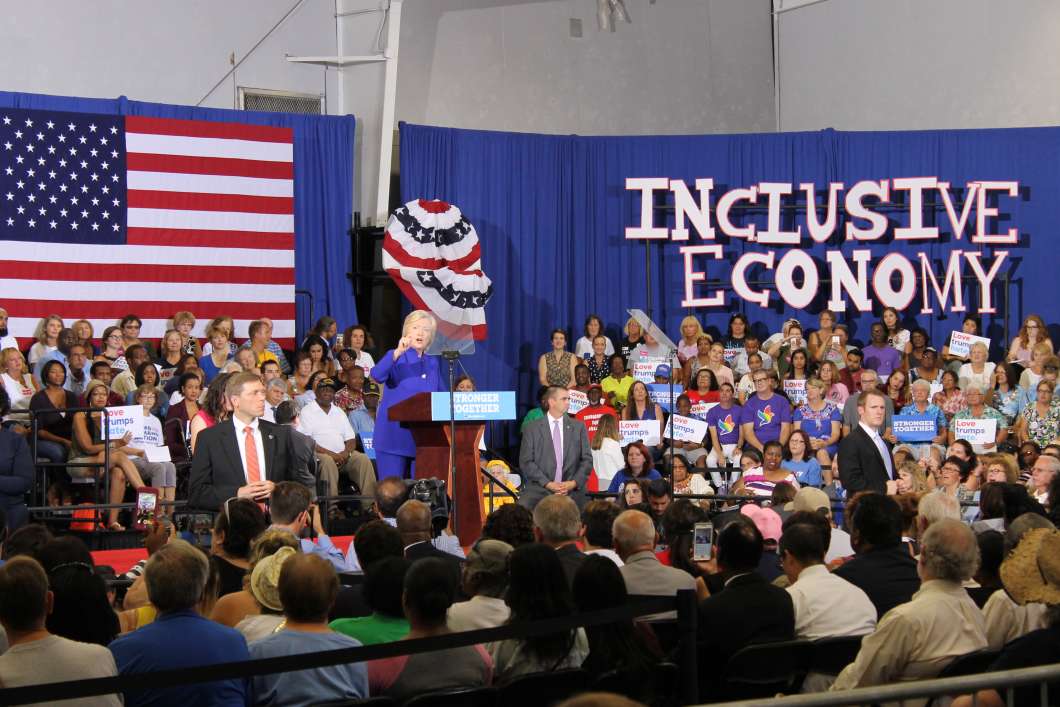 Hillary Clinton focused on issues facing disabled Americans at a rally in Orlando Wednesday afternoon. About 300 people packed into a hall at the Frontline Outreach center.

Clinton was introduced by disability advocate Anastasia Somoza, and for most of her speech she talked about the importance of increasing access to education and opportunities for the disabled to get good jobs.

Clinton said she would make the economy and the country more welcoming to people with disabilities.

“We’ve got to build an inclusive economy that welcomes people with disabilities, values their work, treats them with respect,” she said.

“One advocate after another has told me the same thing: we don’t want pity, we want paychecks. We want the chance to contribute.”

Clinton started her speech with a reference to the Pulse nightclub shooting in Orlando, saying the city had been through a lot.

“What has been so notable is you’ve responded with grace. You’ve shown the world what Orlando is made of: strength, love and kindness. This is something we could all use more of right now,” said Clinton.

“There is still much we don’t know about what happened in both incidents, but we do know we have two more names to add to a list of African Americans killed by police officers in these incidents. It’s unbearable and it needs to become intolerable.”

Clinton also spoke about the targeting of police officers in Philadelphia and the demonstrations in Charlotte that left 12 officers injured. And she praised the work of police in New York, New Jersey and Minnesota for their response to terror attacks over the weekend.

Clinton supporter Ed Hochard from Palm Bay was wearing a T shirt with ‘Deplorable Don’ printed on the front that he had made especially for the rally.

Hochard said Clinton was not his first choice, but he thinks she is a more transparent candidate than Donald Trump.

Thi Tran, who wore a hat with the slogan ‘America is Already Great’ said Clinton wasn’t her first choice either, but she’s worried about Trump’s policies.

“His economic policies are very unrealistic. He wants to do protectionism plus tax cuts plus increased spending. You can’t do all three and not cause a huge deficit in our budget,” said Tran.

“I don’t think he puts very much thought into his ideology and his plans for the country. I think he just feeds the crowd and says what they want to hear,” said Tran.

The rally drew some protesters too.

Linda O’Keefe stood outside the Frontline Outreach Center carrying a basket full of baby dolls and a sign reading ‘This looks like a basket of deplorables to Democrats”.

O’Keefe doesn’t agree with Clinton’s position on abortion, and she’s voting for Trump.

“Well, to be honest he was not my first choice through the primary, he probably wasn’t even my 10th choice,” said O’Keefe.

“But I feel that between the two of them, he is the better choice for people of faith,” she said.

While she will vote for Trump, O’Keefe said she is leaving the Republican Party.

She said several of her friends have already left the GOP because they don’t think the party shares their views as conservatives.