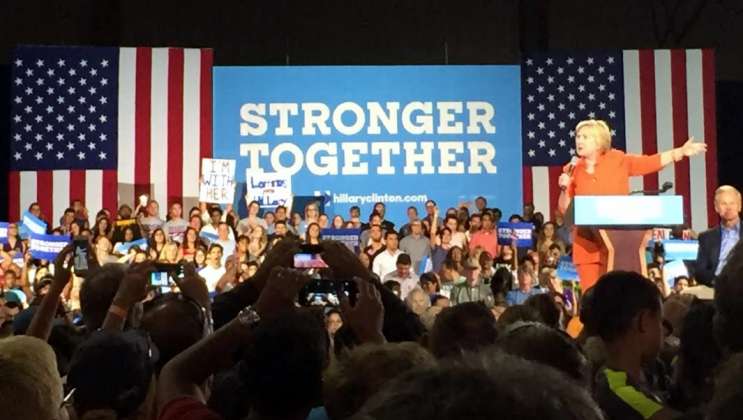 Standing before thousands, some in shirts and buttons that read I’m with Her and Dump Trump 2016, democratic presidential nominee Hillary Clinton outlined a bipartisan agenda that puts jobs at the forefront of her first three months in office.

“Would you rather have a president who says ‘You’re fired’ or ‘You’re hired’?” she asked the crowd of Democrats, Republicans, and unaffiliated voters. “I’m hoping you’re going to hear a lot of ‘You’re hired’ when I’m president because that’s what I want us to do together,” she said.

Clinton touted a plan to create ten million jobs, many in infrastructure, to repair roads, bridges, and waterways, noting that the next generation of workers will need technical skills.

She acknowledged the strong presence of Latinos in Kissimmee, particularly those who have left Puerto Rico to settle in the region; and she subtly addressed gun violence across the state.

“[My plan] includes comprehensive immigration reform with a path to citizenship. We’re going to keep our country safe. And yes, we’re going to go after the gun lobby and try to get common sense gun safety measures,” she said.

As Clinton spoke to the crowd, her campaign workers circulated voter registration forms. A handful of protesters carrying “Make America Great Again” signs in support of Republican presidential nominee Donald Trump heckled Clinton during her speech, but were escorted out of the building.

Clinton wraps up her two-day campaign visit to Florida Tuesday with a trip to Miami.