Hiking the Green Swamp With The Florida Wildlife Corridor Expedition 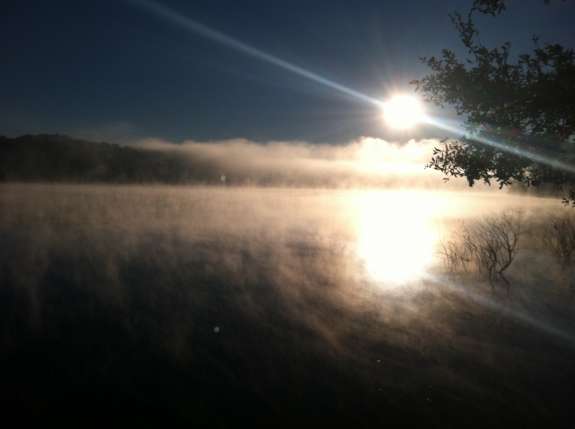 It’s a chilly morning at a remote campground in Pasco County, on the edge of the Green Swamp. Florida Wildlife Corridor Expedition member Joe Guthie is busy chopping wood, trying to stay warm in the raw, damp cold. He’s getting some heat from Zack Forsberg, who drives the support vehicle for the expedition.

FORSBERG: If you’re going to lose a limb, lose it to a snake or an alligator – not chopping at camp.

The fire doubles as a sock and shoe dryer. And boy, did they need it.

DIMMITT: Well, there’s a lot of wet trail walking. There are several different river crossings, and then just lots of the trail is flooded or has standing water.

Expedition leader Mallory Lykes Dimmitt of Tampa is huddling in her tent, while her shoes drip on the fire grate.

DIMMITT: So every day, we definitely got our socks and boots fully wet, and got the bottom of our legs pretty wet and just got used to wading through.

The Green Swamp is just what its name is – more than a hundred thousand acres of protected wetlands and piney uplands that is a key link in the water supply for millions of people. It’s the highest point in the Floridan Aquifer, the underground drinking source for a large chunk of the state. It’s also the headwaters for four major rivers – the Hillsborough, Withlacoochee, Ocklawaha and the Peace River.

It’s been described as the water tower for much of the state.

WARD: It’s truly a statewide influence for this aquifer, with rivers going to the Atlantic and the Gulf, and recharging the drinking water system that goes from Florida all the way to southern Georgia.

Expedition veteran Carlton Ward Junior says he was “really blown away by the beauty and expanse of this place.”

WARD: Yesterday, for example, I’m not sure we had a mental image of what we were going to encounter, but it was overcast and slightly drizzly, and we were right there by the Withlacoochee River by these cypress knees and swamps. It was absolutely breathtaking. Because of all the rains we had, the resurrection ferns were in full bloom and all the oak trees were just dancing and alive.

Thousands of people drive by it every day on Interstate 4, but not too many people know about the Green Swamp. It’s a dark green blob on satellite photos, seemingly in a vise grip between the light gray of subdivisions encroaching on either side from Orlando and Tampa Bay.

Once I reach the campground, we take a three-hour, three-county tour of the Green Swamp West, nearly 40,000 acres of land managed by the Southwest Florida Water Management District. August Fox, a senior land management specialist with the water district takes us on heavily rutted roads through Pasco, Sumter and Lake Counties, through cypress domes divided by higher ground. The district is replanting native longleaf pines. They once carpeted southeast Florida, but these trees were prized by logcutters, and only three percent remain.

Fox shows a photo of an old locomotive laden with logs from this area around a hundred years ago.

FOX: If you remember that mainline grade up there, that was an original railroad tram. Some of these were the late eighteen hundreds, and up through the thirties. WARD: Look at the size of the logs up there…

DIMMITT: None of us knew what to expect. The Green Swamp is so close, right here next to Tampa and Orlando, but not that well-visited by backpackers and recreationalists. So the Florida Trail is just an incredible resource right in our backyard, and we loved it. It goes through varied terrain, including pine flatwoods, palmettos, and then standing cypress swamps off to each side of the trail. So we actually waded out into the swamps, took some photographs, and just enjoyed it.

Ward, a Tampa photographer, points his camera at some of the longleaf pine being restored.

WARD: I’ve enjoyed tremendously exploring this place the last three days. It’s so close to home, but relatively unseen and undiscovered. To be able to hike the Florida National Scenic Trail and explore these rivers and creeks and uplands – it’s a gem hiding in plain site.

With that, the group prepared to paddle down the Withlacoochee, one of the rivers born in this protected area.