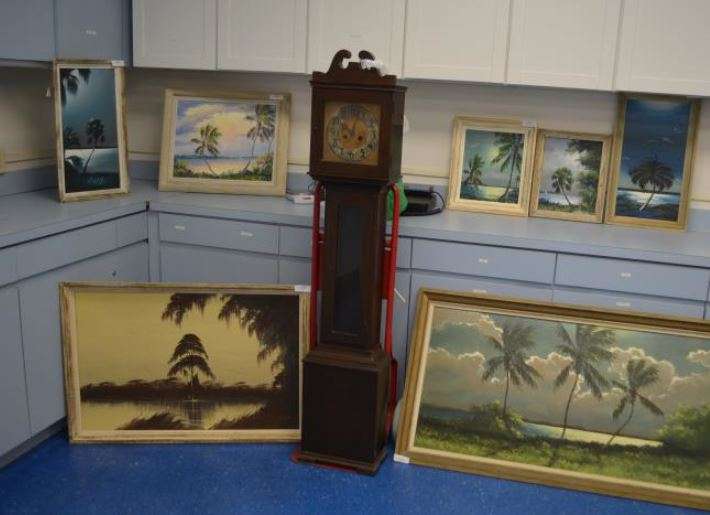 The Melbourne Police Department has recovered several Highwaymen paintings, a clock and a vase reported stolen over the summer. Photo: Melbourne PD

Melbourne police are looking for the man they believe stole several Highwaymen paintings, parrots, a grandfather clock and an heirloom vase.

The stolen Highwaymen paintings, clock and vase have been found, but not the parrots — Little Jim, Red Neck, Buffett, Mack and Bobblehead — or the man suspected of stealing them.

“Being able to spread the word as much as possible because if somebody does have them and does see it — and we put as much description as we could into our press release that we did let out there — then hopefully try and have them come forward and find them so we can return them to their owner,” Chapman said.

Police are also looking for 67-year-old George Steven Rivera. He left prison about a year ago and is still on probation for a burglary from 1995. Rivera had been sent away for 25 years because of his already long criminal history at the time — 12 felonies, 19 misdemeanors and a parole violation.

Officers say he was doing burglaries again last summer and tried to pass himself off as an art dealer selling the colorful, uniquely Florida landscape paintings.

A news report led to a tip and a break in the case.

The Melbourne Police Department provided these descriptions of the parrots:
– Congo African Grey with chest and legs feathers plucked,
– Congo African Grey with red feathers on the back of neck and on chest,
– Scarlet Macaw Good who is very thin,
– Blue and Gold Macaw, and
– Blue Front Amazon who is missing toes and has a fatty tumor on the rear and who bobbles his head a lot.