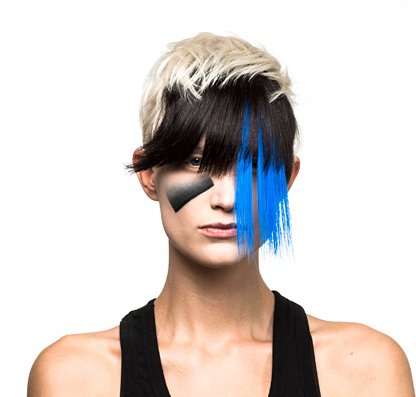 Everywhere we go, we’re being scanned by cameras. You expect it in airports, banks and stores, but as we’ve learned recently, the city of Orlando is experimenting with real-time surveillance technology in public spaces. If this doesn’t sit right with you, there are ways to preserve your anonymity from the cameras, though you may draw extra attention from your fellow citizens on the street.

For instance, artist Adam Harvey created a strategy for hiding in plain sight inspired by the dazzle camouflage employed in World War I. By covering warships with blocky stripes and patterns in high-contrast colors, Allied officers made it tough for the enemy to estimate their size, speed and direction of travel. It turns out this fool-the-eye technique can confuse algorithmic surveillance as well.

In Harvey’s “Computer Vision Dazzle,” his subjects’ faces are painted in colors and patterns that obscure the “normal” gradations of skin tone and spatial relationships between features. And since facial recognition software works by measuring the distance between nose, eyes and mouth and mapping facial topography within expected norms, defying those norms can throw off the system of pattern recognition.

In many states, it’s illegal to wear masks at protests; whether lawmakers will be able to write legislation outlawing makeup techniques remains to be seen. In the meantime, perhaps protest organizers should take a tip from family festivals and add a face-painting booth.