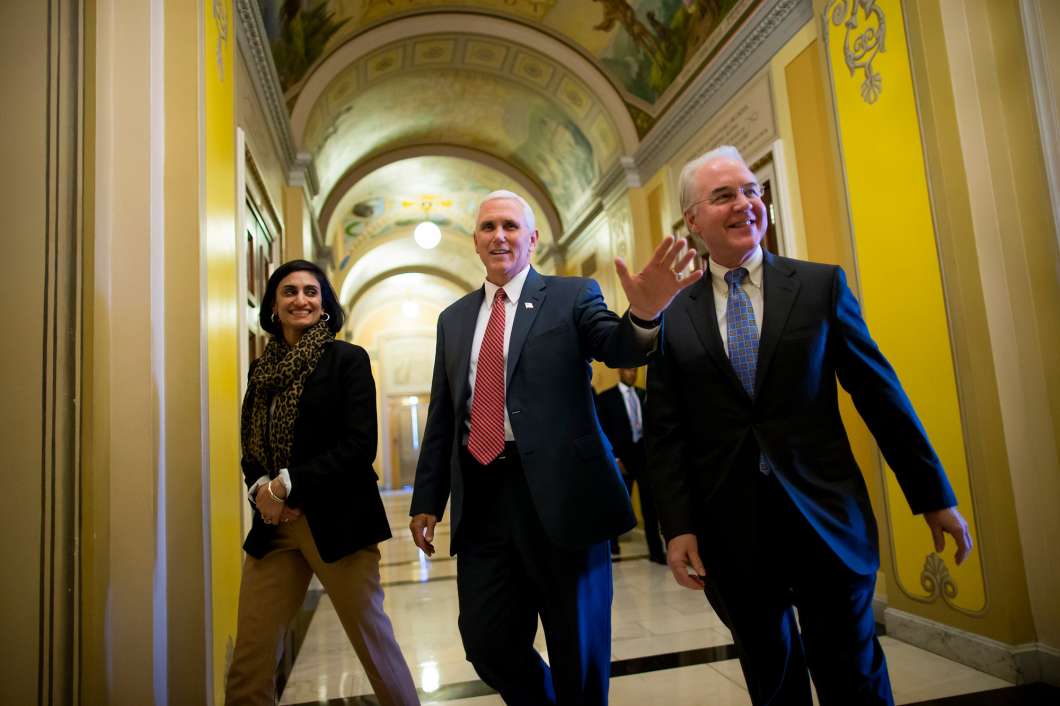 Seema Verma, who is administrator of the Centers for Medicare and Medicaid Services, on Capitol Hill with Vice President Mike Pence and Secretary of Health and Human Services Tom Price while advocating for the GOP health overhaul bill.
Image credit: Eric Thayer

Republicans approved their plan to replace the Affordable Care Act on Thursday.

Here’s a rundown of key provisions in the American Health Care Act and what would happen if the Senate approves them and the bill becomes law.

The bill would no longer require people to buy insurance through the marketplaces created by the Affordable Care Act, also known as Obamacare, if they want to use federal tax credits to buy coverage. It also would eliminate the tax penalty for failing to have health insurance coverage, effectively eliminating that requirement altogether.

In place of that mandate, the bill encourages people to maintain coverage by prohibiting insurance companies from cutting them off or charging more for pre-existing conditions for as long as their insurance doesn’t lapse. If coverage is interrupted for more than 63 days, however, insurers can charge people a 30 percent penalty over their premium for one year.

That means some people will see their costs go up while others would pay less, depending on your age and where you live. This Kaiser Family Foundation interactive map shows how the change would play out across the country.

Both Kaiser and the Congressional Budget Office found that on average, older people with lower incomes would be worse off under the Republican plan than under the Affordable Care Act.

The bill eliminates nearly all the taxes that were included in the Affordable Care act to pay for the subsidies that help people buy insurance. Those cuts, which add up to about $592 billion, include a tax on incomes over $200,000 (or $250,000 for a married couple); a tax on health insurers and a limit on how much insurance companies can deduct for executive pay; and a tax on medical-device manufacturers.

The AHCA would make dramatic changes to the Medicaid program, which is the federal –state health program for the poor and disabled.

The Affordable Care Act allows states to expand eligibility for Medicaid to single, non-disabled adults with incomes slightly above the poverty line, with the federal government picking up most of the cost. That meant single adults who earn up to $15,800 a year could qualify in the 31 states, plus the District of Columbia, that expanded Medicaid. About 10 million people enrolled under that expansion.

The Republican plan would gradually roll back that expansion starting in 2019 by cutting the federal reimbursement to states for anyone who leaves the Medicaid rolls. People often cycle in and out of the program as their income fluctuates, so the result would likely be ever-dwindling numbers covered.

The House bill also converts Medicaid from an entitlement program where the government pays all the health-related costs for those who qualify, into a grant program. The federal government would give states either a set amount of money for each Medicaid enrollee, or states can choose to receive a fixed-dollar block grant.

The Congressional Budget Office estimated in March that the bill would cut Medicaid spending by $880 billion.

The AHCA maintains protections for people with pre-existing conditions, with some important exceptions (see waivers, below). That means that someone with high medical expenses pays the same premium for the same policy as anyone else their age in their area.

This section of the bill essentially amounts to an optional, state-level full repeal of Obamacare. It would give states the ability to apply for a waiver that lets them opt out of most of the regulations and consumer protections that were included in the Affordable Care Act.

States could apply for waivers that allow insurance companies in their states to do three things: 1) Charge older people more than five times what they charge young people for the same policy; 2) Eliminate required coverage, called essential health benefits including maternity care, mental health and prescription drugs, required under the Affordable Care Act; and 3) Charge more or deny coverage to people who have pre-existing health conditions, such as cancer, diabetes or arthritis.

The waivers could also impact people with-employer based insurance, because they would allow insurers to offer policies that have annual and lifetime benefit limits, which are banned under the Affordable Care Act, and some companies may choose those policies for their workers to lower their premiums.

States that get waivers would likely see insurance companies offer many more policy options, some with fewer benefits and lower premiums.

Those states would be required under the law to create some other way to ensure that people with expensive illnesses are able to get health care, and the law provides up to $138 billion over 10 years for such programs, typically called high-risk pools.

However, an analysis released Thursday by the consulting form Avalere concludes that that amount would be inadequate to provide full health coverage for the number of people who now buy insurance in the individual market and have medical problems.

The House approved the bill Thursday without a full analysis by the Congressional Budget Office of its costs and how many people would be covered.

The CBO report from March concluded that over 10 years, 24 million fewer people would be covered under the bill who otherwise would have had insurance under current law.

That analysis also predicted that the House bill would cut the federal deficit by $337 billion over those same 10 years.

However, changes to the bill since then would allow states to accept block grants for Medicaid; add about $38 billion for high-risk pools and maternity and childbirth care; and offer states waivers from regulations created by the Affordable Care Act. It’s unclear how much these changes would affect the original CBO score.