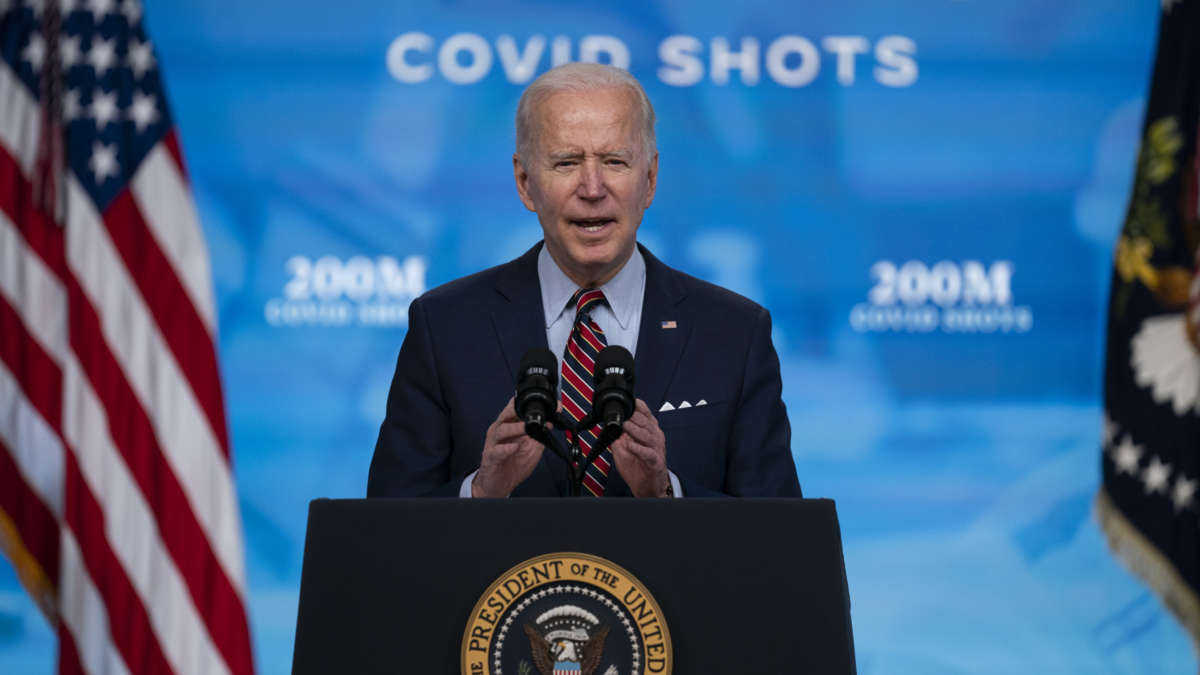 When President Biden arrives to give his speech to a joint session of Congress on Wednesday night, he will be masked as he enters what will be a noticeably less crowded, more socially distanced House chamber. Here, Biden speaks about COVID-19 vaccinations at the White House.
Image credit: Evan Vucci

President Biden is set to address a joint session of Congress for the first time on Wednesday night, on the eve of his 100th day in office. He’ll be delivering the address later into his term than most presidents have traditionally done so, giving him a bigger window to draw from as he looks to highlight early accomplishments.

Amid the coronavirus pandemic, the speech will feel both familiar and unique all at once. Some traditions — like the president’s walk down the aisle of the House chamber — will be the same. But the president will also be masked as he enters what will be a noticeably less crowded, more socially distanced chamber.

Here’s what you need to know ahead of Wednesday night’s speech.

What time is the address?

The speech is set to begin around 9 p.m. ET. You can listen to NPR’s simulcast of the event on NPR.org, on the NPR One app or on your local NPR member station. Find your station here.

NPR will also provide additional coverage and analysis of Biden’s address and the Republican response on NPR.org.

What will Biden talk about?

Biden made a number of promises ahead of the 100-day mark, from rolling out a vaccination plan to establishing the U.S. as an international leader on climate change. Wednesday’s speech will allow the president to reflect on his achievements — like pushing his signature $1.9 trillion coronavirus relief package through Congress and getting 200 million shots in arms in his first 100 days.

But he may also take on more difficult subjects, including the surge of migrants on the southern border, which has posed an early test for his administration.

Biden is expected to use the address as an opportunity to pitch his newly unveiled American Families Plan, which focuses on child care and education largely paid for by higher taxes on wealthy Americans. That’s in addition to his $2.3 trillion infrastructure proposal, which has sparked debate among lawmakers about what should be included under the infrastructure umbrella.

At a briefing Tuesday, White House press secretary Jen Psaki said the American Families Plan will be the major policy focus of the address. But she said Biden will also discuss immigration, gun safety, the pandemic and police reform. The speech will come just eight days after former Minneapolis police officer Derek Chauvin was found guilty on all counts for the death of George Floyd last year.

“[Biden] was in the Senate for 36 years. He also sat through eight [years] as the vice president, and he certainly recognizes the important opportunity that this offers,” Psaki said of the address.

How will this speech look different from past years’ speeches?

Traditionally, all members of Congress and their (often high-profile) guests gather in the House chamber. But with COVID-19 protocols in place, only a fraction of members will be in attendance, and they will be unable to bring guests.

Around 200 people in all are expected at the speech, instead of the roughly 1,600 who typically attend. First lady Jill Biden will be in the audience, along with Vice President Harris and second gentleman Doug Emhoff. Chief Justice John Roberts will be the only Supreme Court justice in attendance, and while Defense Secretary Lloyd Austin and Secretary of State Antony Blinken will be there, most of the Cabinet will not.

There will be no first lady’s box, which is typically filled with attendees invited by the president’s family. And given the scaled-back nature of the event, Psaki confirmed Tuesday that there will be no “designated survivor” for the address. (A designated survivor is an administration official who sits out a major presidential address in case of a disaster scenario.)

Another difference this year will be who is seated behind the president. Tradition calls for the vice president and the speaker of the House to appear behind the president when he addresses a joint session of Congress. This year, that will be Harris and House Speaker Nancy Pelosi — the first time two women will be in the frame. Biden will also be the first president to deliver the speech in front of a mask-wearing audience.

Who is delivering the Republican response?

Tim Scott of South Carolina, the only Black Republican in the Senate, will deliver the Republican response. Scott has been central to negotiations in Congress around policing legislation and unveiled a plan last year that would reduce, though not ban, the use of chokeholds.

“We face serious challenges on multiple fronts, but I am as confident as I have ever been in the promise and potential of America,” Scott said in a statement. “I look forward to having an honest conversation with the American people and sharing Republicans’ optimistic vision for expanding opportunity and empowering working families.”

Though the response is often an opportunity to raise the speaker’s political profile, Scott has said he doesn’t plan to run for office again following his 2022 reelection race.