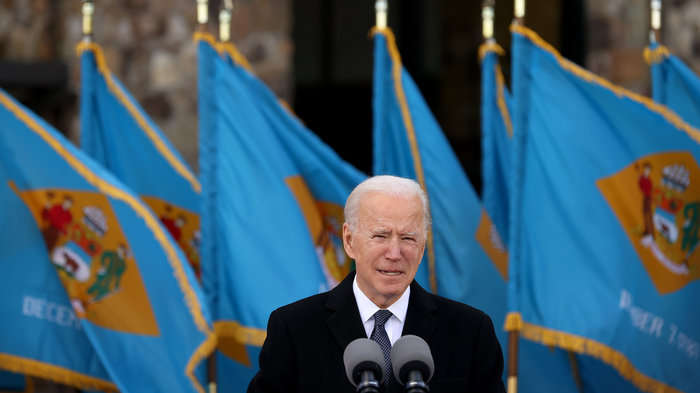 NEW CASTLE, DELAWARE - JANUARY 19: U.S. President-elect Joe Biden becomes emotional as he delivers remarks at the Major Joseph R. "Beau" Biden III National Guard/Reserve Center January 19, 2021 in New Castle, Delaware. The reserve center is named for Beau Biden, Joe Biden’s oldest child and who served as attorney general of Delaware and a major in the state’s National Guard before dying of brain cancer at the age of 46 in 2015. (Photo by Chip Somodevilla/Getty Images)

President-elect Joe Biden, seen here speaking in Delaware just before leaving for Washington, plans a flurry of executive actions as soon as he is sworn into office.
Image credit: Chip Somodevilla

Just hours after he is sworn into office on Inauguration Day, President-elect Joe Biden plans to sign 17 executive actions in the Oval Office to try to hit the ground running on his top priorities — and to roll back some of President Trump’s initiatives in those areas, a group of his top advisers told reporters.

Biden wants to build momentum on his plans to address the COVID-19 crisis, the economy, racial justice and climate. Among the many measures, he plans to order masks be worn on federal property, will revoke President Trump’s travel ban affecting Muslim-majority nations, extend the ban on evictions and foreclosures as a result of the pandemic, and instruct agencies to conduct a baseline review of systemic inequities in their programs and policies.

“The president-elect has promised to root out systemic racism from our institutions,” said Susan Rice, Biden’s domestic policy adviser, one of the officials who briefed reporters. “This initiative is a first step in that historic work. Delivering on racial justice will require that the administration takes a comprehensive approach to embed equity in every aspect of our policy making.”

The Biden officials said the 17 actions are just the first of many to come over the next several weeks.

Biden plans to take immediate steps to rejoin the World Health Organization. Trump pulled the United States out of the WHO during the pandemic, accusing the organization of being too deferential to China. The incoming officials said Dr. Anthony Fauci, the nation’s top infectious disease expert, is set to participate in an executive board meeting of the WHO on Thursday, the officials said.

“America’s withdrawal from the international arena has impeded progress on the global response and left us more vulnerable to future pandemics,” said Jeff Zients, the incoming White House coordinator for the coronavirus response.

On climate change, Biden will rejoin the Paris climate agreement. He will also revoke the permit for the Keystone XL oil pipeline from Canada, which has been vehemently opposed by environmentalists for years.

The use of executive actions has become more common in recent presidencies, with major legislation often stalled by congressional gridlock. But the actions can often be fodder for lawsuits and criticism from political opponents — and can be more easily overturned by future administrations.

Below is a partial list of Biden’s planned actions: