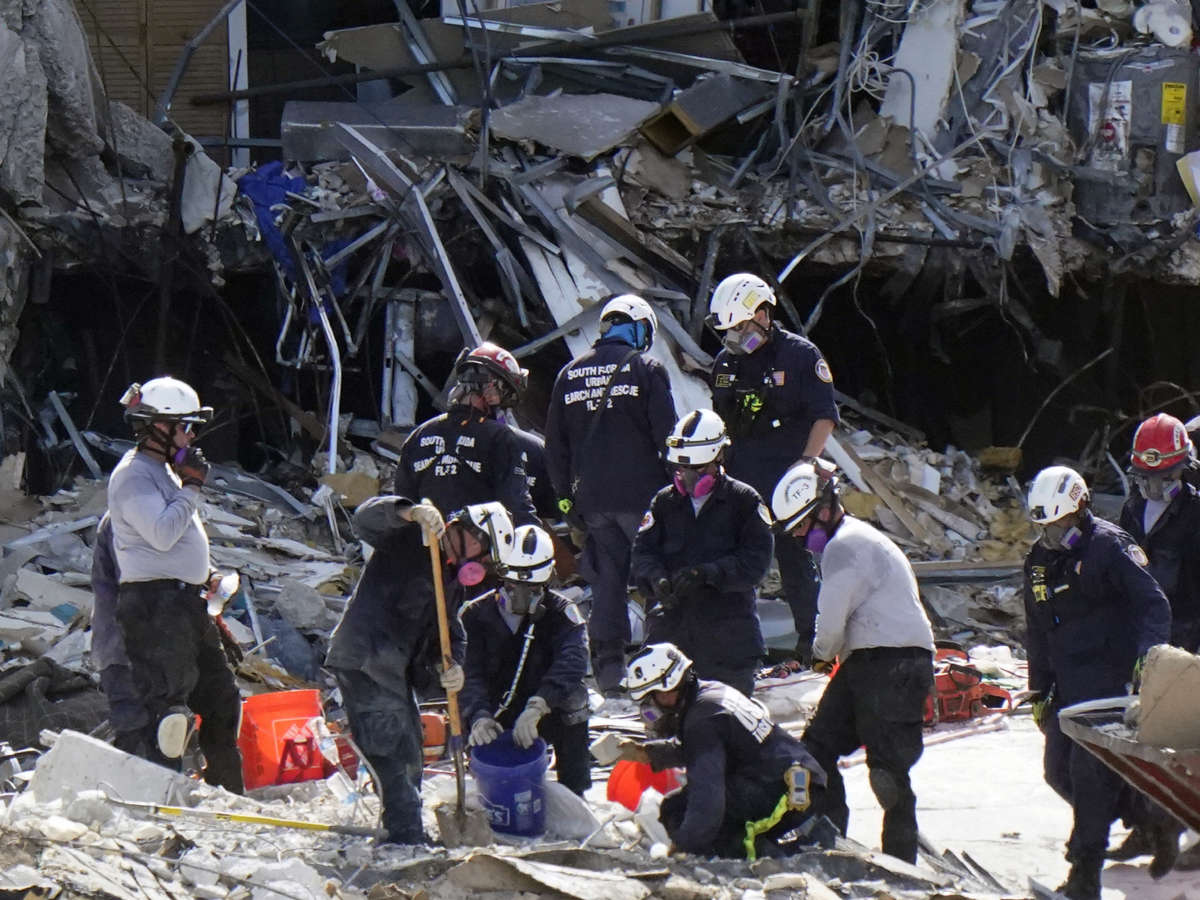 Crews work in the rubble at the Champlain Towers South Condo, Sunday, June 27 in Surfside, Fla. Many people were still unaccounted for after Thursday's fatal collapse.
Image credit: Wilfredo Lee

Throughout the weekend rescue crews worked to comb through the wreckage of the partially collapsed Champlain Towers South building in Surfside, Fla.

Emergency crews have been working at the location around the clock since part of the condo building came crashing down at around 1:30 a.m. last Thursday.

Local officials have regularly held media briefings to update the public about recovery efforts. Miami-Dade Police have been sharing the identities of victims online once they have been identified and their families have been contacted.

Here’s what we know at the start of the week:

The death toll stands at nine and recovery efforts continue

The official death toll is unchanged from early Sunday evening, at nine. The number of people unaccounted for is 152, with 134 now accounted for as of 5 a.m. Monday morning.

Authorities have publicly identified eight of the nine victims of the building collapse. The victims range in age from 26 to 83.

Families of the known victims had the opportunity to privately visit the site on Sunday, according to Miami-Dade County Mayor Daniella Levine Cava.

She urged family members who have not yet filed a missing persons report to talk to a detective and to have their DNA taken so that police can match that information with any remains found.

“This will be critically important for our identification,” she said at a press conference.

Levine Cara said that detectives still haven’t been able to reach the families of all people missing in the collapse.

Structural problems were a known issue

A structural engineering report dated Oct. 8, 2018, and provided to the Champlain Towers condominium association, found widespread problems that required extensive repairs “in the near future.”

The nine-page report, authored by Morabito Consultants, listed several areas of concern with the 40-year-old building.

The report detailed significant cracks and breaks in the building’s concrete “which required repairs to ensure the safety of the residents and the public.”

There was, according to this report, “major structural damage” to the concrete structural slab below the pool deck, caused by waterproofing that was “beyond its useful life.

The report also warned of “abundant cracking and spalling” in the concrete columns, beams and walls. Earlier repair efforts to the garage had been done improperly, the report found.

At the time the building collapsed, work had only been done on the roof and not yet on concrete restoration.

Officials said the building was sound despite issues

Despite the engineering report that warned of potentially devastating problems in the building, a Surfside, Fla., official told Champlain Towers South residents the building was safe.

NPR first reported Sunday that just one month after the engineering report warned of “major structural damage,” a town inspector met with residents of the building, and assured them it was “in very good shape.”

Minutes of a Nov. 2018 meeting showed that Surfside’s town inspector Ross Prieto was there to discuss the report.

Local officials told reporters Saturday that they knew nothing about the report prior to its release this weekend.

Work will continue through the week

Some residents voluntarily have evacuated from the remainder of the condo building, but currently there is no mandatory evacuation in place.

Tina Paul, vice mayor of Surfside, Fla., spoke with NPR’s All Things Considered Sunday and said an investigation has been opened into what may have caused the Champlain Towers South building to collapse.

Rescuers will continue to work through the rubble, but responders have said they have yet to hear any more sounds amid the wreckage that would indicate there are people still alive and trapped in it.

But, Mayor Levine Cara said, “we continue to have hope.”