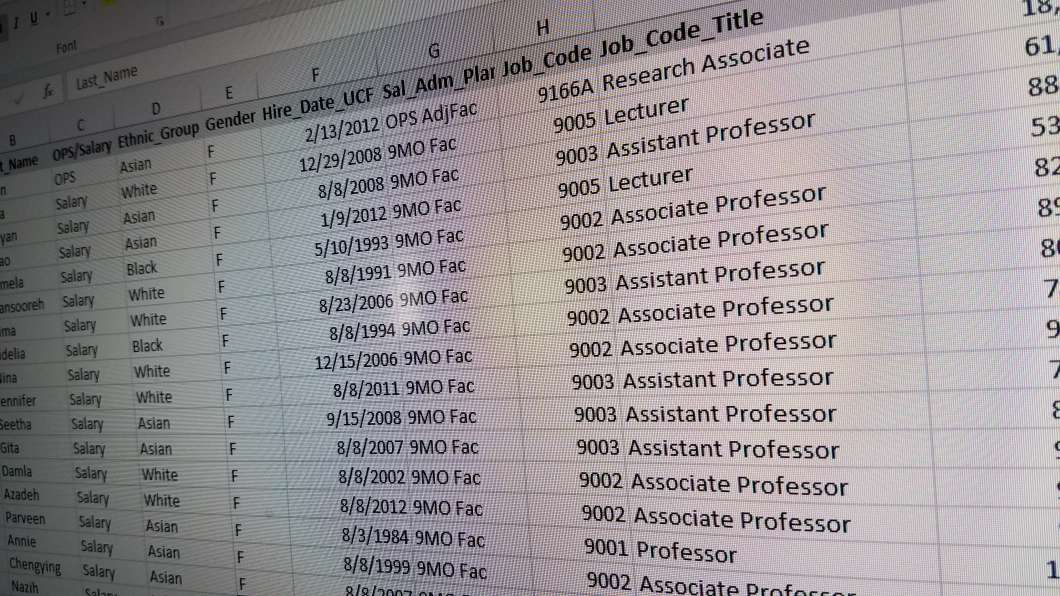 Nicole Darden Creston: All this week we’re looking into Florida’s public records as a way to highlight Sunshine Week. This morning, we explore the demographic makeup and salaries of college faculty. 90.7’s Brendan Byrne you took a look at the faculty in the engineering field around the state. Where did the idea come from?

Brendan Byrne:  When the newsroom decided to take on this sunshine week project, I was trying to figure out just what I would cover. So I reached out to a source I’ve worked with in the past. Pamela McCauley is a professor of engineering at the University of Central Florida. She does a lot of work with women engineers and developing their STEM careers and she share this startling statistic:

“The statistic is of the women entering STEM careers today, approximately 45 percent of them will be gone from the field by the time the turn 40,” she told me. While there could be a host of reasons why this is happening like work life balance, career changes, etc., McCauley said a lack of mentors and role models early in a women’s career including high school and college is partly to blame. She told me she didn’t have many women engineers to look up to as she went from kindergarten to grad school. Having those mentors early are crucial in keeping women in the engineering workforce “so they can actually see people who look like them, they see women who are engineers and scientist and actually enjoying their careers, that’s a role model. A mentor, someone who can help shepherd you through the process, help you understand what it’s going to take to be a successful scientist or engineer and what some of the career options might be when you do decide to choose your field.”

Darden Creston: So if I’m following you here, your story is going to look at role models in engineering? How are you going to quantify that with public records?

Byrne: You’re right. Here’s the great thing about public records and the state of Florida – as I’m sure our listeners are finding out this week: Florida has a very broad set of public records law. State employee information including college faculty is available publicly and quite easy to access. Florida Has a Right to Know lists state contracts, state employees’ salaries and state employee regulations in a free to use, easy to access website. Everything from the groundskeeper to the dean of the university is available to the public to access salary information.

Darden Creston: A quick click over to that website and we can find how many women engineering professors are at each college?

Byrne: Eh, not that simple. The state records on that website list the names, salary, position, etc., but no demographic information. That doesn’t mean it’s not available. All it takes is a request to the University’s general council, basically it’s legal department, with a request for the information we’re looking for. I reached out to four colleges – University of Central Florida, Florida, Florida State and South Florida – back in February asking for a list of faculty over the past five years including their position, gender and salary. Since I was already making the request I went ahead and added race, too.

Darden Creston: What did you find?

Byrne: I received responses from UCF and FSU. Records from UF and USF wouldn’t be available in time for this story.

After throwing the data into excel, I started to see what McCauley was talking about. At Florida State, 18 percent of the teaching faculty of its college of engineering was female. At University of Central Florida’s college of engineering and computer science, that number was around 17 percent. That’s nowhere near the actual makeup of gender in our society, right? According to the Society of Women Engineers, the U.S. average is about 15 percent for all faculty.

Darden Creston: So by that standard, the Florida schools you looked at are slightly ahead of the curve.

Byrne: They are, and they showed growth in female faculty over the five years of records I looked at.  I want to share something else I found in the records. Remember I said when I made the request I asked for race, too? Well after playing around with the data in the records I started to see other underrepresented groups, too.

At Florida State, 11 percent of the engineer faculty were black and 7 percent were Hispanic in 2017. At UCF, that number is lower – four percent black and four percent Hispanic.

Darden Creston: Now that has me thing back to what UCF Professor Pamela McCauley said earlier about women in engineering schools not having a role model and how that could be a factor in why they’re leaving the industry.

Byrne: Exactly. It’s the reason why diversity – both in gender and ethnicity – is important to Dr. Elizabeth Dooley, the Dean of the College of Undergraduate Studies at UCF.

“It’s not only important for individuals of color,” she told me. “We pride ourselves as a university saying voices matter, information matters, perspective matter, and if we’re preparing our students for a world, we’re not a one culture world, we would be doing our students a disservice if we didn’t reflect the views of an interracial composition of faculties and students.”

Now UCF is working to increase what they call underrepresented minorities – that’s faculty that identifies as black, American Indians/Alaska Natives, and Hispanic and they’re doing it on two fronts. One, recruiting more – so getting more faculty into the school. Another is retention – keeping those faculty in positions. But one thing I found in the records is there is a clear salary gap between these groups.

Darden Creston: That’s not what you set out to investigation, right?

That’s roughly $20,000 a year less than the average. The data from FSU had around the same gap, but I focused my analysis on UCF since there was more data to work with.

Darden Creston: That seems like a substantial difference in salary. What seems to be the reasoning behind it?

Byrne: UCF’s Office of Diversity and Inclusion recognizes the gaps and the office is holding an equal pay day next month to bring more attention to the issue. As for the cause, McCauley, who I should mention is black, says it’s a systemic issue. Promotion throughout the academic system which would mean a pay increase is peer-driven.

“We know demographically speaking, those people are not underrepresented minorities, or women, so often times you have inherent bias that’s well at play, and there have been a number of studies done to show this is real,” she said. “It’s just clear, undisputed evidence of bias, and we have a responsibility to do something about that.”

I will say the data that I pulled was over a five year period, and that gap over time is closing. UCF takes faculty diversity very seriously. Dean Elizabeth Dooley says the school, as a whole, wants to get 25% of its faculty to be from underrepresented minority groups by in the next two years. Right now, she says, the university is at around 20%.

“We’re optimistic that we’re making gains. One of the things that’s unique about UCF is there is a sense and a feeling of social responsibility to do what’s right for our students,” she said.

Because these records are easily accessible by anyone like journalists and really anyone in the community, we can keep tabs on these institutions and hold them accountable to those goals. For this particular records search there was a fee. In my case, the University of Central Florida charged me less than $50 to have someone gather the data for me. So the accessibility of these records mean journalists and the community can gain access to them.

Note: The University of Central Florida provided this statement on the salary gaps:

“UCF is committed to ensuring all of our faculty are compensated fairly and equitably. Last summer, we conducted a university-wide faculty equity salary study, which found no statistically significant gender or racial differences among full or assistant professors.

Some gaps were identified among female and minority associate professors, with about 90 faculty members identified for salary adjustments to close equity gaps. We have since reviewed their salaries, along with another 20 faculty who were found to have salaries below the average level. Some salary adjustments were made in early 2018, and additional adjustments are expected this fall.

As we move forward, UCF plans to perform a salary equity analysis every three to five years in order to continue monitor diversity and equity in faculty salaries over time.”