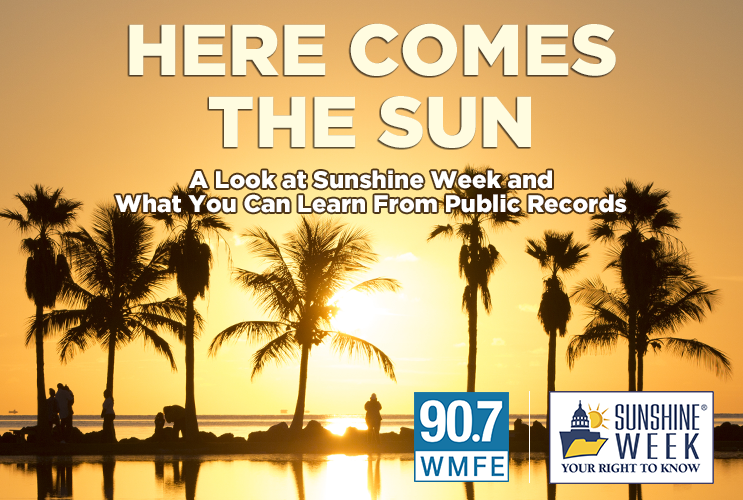 All this week we’re looking into Florida’s public records as a way to highlight Sunshine Week. This morning, we dig into how the criminal justice system handles people with mental illness.

We start in the Orlando neighborhood of Audubon Park. It’s where 90.7’s Catherine Welch noticed messages on the Next Door App from residents worried about a man named Peter Dunn.

Catherine Welch: So Next Door is like Facebook for neighborhoods. And about a year ago residents started posting messages warning people about a man on bike who was whacking people with sticks or in one case a bag full of cans.

By summer, the complaints start flooding in: and now he’s not on a bike – he’s driving a car. A red Jetta.

Welch: Residents posted stories of riding their bikes with their kids and having to move out of the way of a car coming at them. Many others say they were driving down the street when a red Jetta started driving at them … chicken style. That happened to resident Maggie Finley. She was driving around a bend when she saw a car coming from the other direction.

“And at first I did not think “this might be Peter Dunn, this might be a red Jetta. I wasn’t … I was just … I just honked and thought they they’re distracted they’re looking at a text they don’t realize there’s another car here,” said Finley. “I honked and he honked back and started gesturing and that’s when I realized that’s Peter Dunn behind the wheel, that’s a red Jetta. ”

Welch: So she just stopped her car.

“I just stood at a standstill and waited and looked down and thought “I don’t know what’s going to happen, I don’t know how to get out of this, Ii don’t know what to do.” And he kept coming at me and coming at me and right at the last second he veered away and he kinda stopped. When he was parallel with my car and was gesturing at me, and I kinda looked out of the corner of my eye cuz I didn’t want to look him in the eyes because that would be fairly confrontational I think. And I was just like ‘okay he’s not in front of my car anymore’ and I slowly drove away,” said Finley.

Darden Creston: And so Catherine, there’s a flood of posts warning people about this guy and that’s when you saw one that caught your eye.

Welch: It said “someone should do something.” So I thought well, who is that someone and what is that something?

Darden Creston: You ask Orlando police for arrest records and any reports about Peter Dunn. And you’re surprised by how few reports you got back given the outrage on the Next Door app.

Welch: There’s an online portal for the city of Orlando that anyone can use to request a public document. So I went there expecting a flood of police reports, but my first request gleaned one report. So I made another request and got another report. Eventually I got a half-dozen reports.

Darden Creston: In Maggie’s case, after her run in, she called 911 and said “I’d like to file a report and press charges.” But no charges were filed on that incident, why?

Welch:  After her incident an officer showed up then left saying he’d come back but he never returned. What she found out is that just hours after almost driving into her, Peter Dunn drove his car at Orlando police officers. Maggie emailed Orlando police asking why nobody came to take her report, and got a response that there will not be any charges due to his mental condition at the time.

Darden Creston: Why is that?

Welch: That’s what Maggie wanted to know. Corporal Kevlon Kirkpatrick told her specifically at a community meeting that reports need to be filed in order to create a paper trail that could hopefully eventually lead to getting this guy help. Her email exchange with OPD ends in them sending out an officer to take her report. Corporal Kirkpatrick tells me that when mental health is in the mix, officers have discretion whether to press charges.

“When they encountered him, they realized that he was not trying to hurt them, he had a mental challenge and therefor they provided him with the services that they felt he needed. And that’s our objective: to provide the services people needed to solve temporarily if you will the challenge that is faced by the community and the officers. And they exercised discretion and decided not to arrest him but to take him to a central receiving facility,” said Kirkpatrick.

Darden Creston: Catherine, it sounds like he’s saying that police are there to protect and serve everyone, including this man who clearly needed help. And at this point officers decide to Baker Act him.

Welch: Correct. So the Baker Act is the Florida law that allows law enforcement, physicians, and judges to commit someone involuntarily if they appear to be harmful to themselves or others. There is a 72 hour limit to how long someone can remain institutionalized without consent. There are Baker Act hearings, and a doctor can petition the court to hold the individual until the condition is brought under control.

Darden Creston: How would someone in the criminal justice system know he had a history of mental health issues?

Welch: In the police reports I got, his bi-polar condition was brought up. An incident in 2003 when police come to his mother’s home she tells officers that he’s throwing objects at her, swinging a baseball bat at her, and she tells police that her son is bi-polar and fails to take his medication on a regular basis.

Darden Creston: In that incident he’s charged with aggravated assault. How extensive is his criminal record?

Welch: Most of his records involved him terrorizing his elderly mother. But nothing beyond misdemeanors. Court records are all posted online through the circuit clerk of court’s website. And Peter Dunn’s file paints a portrait of a man grappling with mental health issues and just looping through the criminal justice system. His mother would call police, he’d either be Baker Acted or on occasion sent to jail. 2014 was a string of events, including being charged on misdemeanor battery and false imprisonment charges.

Court records show he spent a couple months in jail, had his driver’s license taken away, and was put on a program to receive mental health care. He did everything he was told to do enough to end his probation early.

Darden Creston: How was his probation ended early?

Welch: The records to a case can include several different types of documents. This case included email exchanges between probation officers and the public defender’s office along with a judge’s order to end his probation early. And those documents show Peter Dunn paid all of his fines and he completed an in-house program at a psychiatric facility.

When I asked former State’s Attorney Jeff Ashton if early termination of probation was typical, he says a probation officer will recommend it if the person is doing everything they’re supposed to.

Darden Creston: But if someone is a threat to others and themselves, shouldn’t they be somewhere where they can’t do any harm?

Welch: And that’s the question – what do you do with those who need help but lack the ability to seek it? The courts can’t infringe on personal liberty. These people have rights too.

“We don’t have the power to place somebody under lifetime supervision because of mental illness. That doesn’t exist in the law. So you’re both competent and sane, and you’re sentenced to probation or whatever. Or you are Baker Acted for that limited period of time, so there isn’t really anything in between. That’s always been an issue in the criminal justice system is how you deal with people who are mentally ill,” said Ashton.

Darden Creston: Your awareness of Peter Dunn was from the Next Door App … what are residents saying now?

Welch: It’s quiet and that’s because this story has a very sad ending, Nikki. Peter Dunn was found dead in a hotel room the day after Christmas. He was staying in one of those long-stay hotels. He missed making his next payment, the guy who ran the hotel was worried because Peter would pay for his room on time. When there was payment, he was found dead with several bottles of medication on the bedside table and other bottles thrown about the room. No foul play was suspected. He was 56 years old.