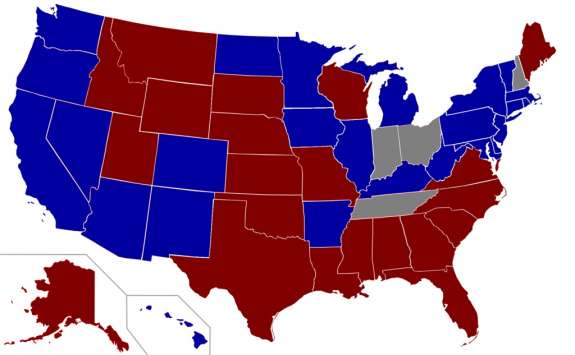 States that have not expanded Medicaid are in red. Image: Wikimedia Commons

Health care advocates in Florida are hoping lawmakers will close the so-called ‘coverage gap’ this year.

Activists took part in a statewide day of action Thursday to highlight the fact that about a million Floridians do not have health insurance.

Florida lawmakers have turned down billions of dollars in Federal assistance under the Affordable Care Act to expand Medicaid.

She says it would make a big difference to about 8,000 patients at Planned Parenthood in Central Florida.

“Based on client surveys that we conducted last year with our two Orange County health centers, we identified 60 per cent of our patients are in the coverage gap, which means they do not have access to affordable insurance,” says Eskamani.

Activists visited the offices of freshman lawmakers in Central Florida on Thursday to draw their attention to the coverage gap.

“We see individuals like Senator Thad Altman, Senator Andy Gardiner really, really come to make excellent points regarding how this is an issue that’s impacting their constituents,” she says.