Health Care A Top Issue For Voters Along I-4 Corridor 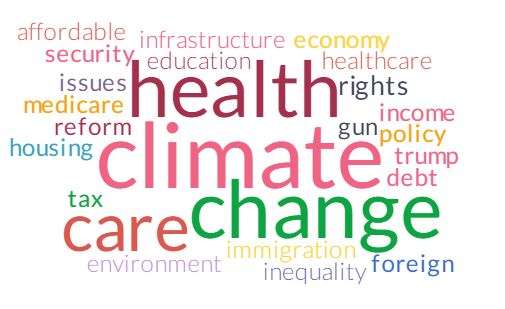 Voters across the country say health care is one of their top issues going into this year’s election.

It ranks as the top issue for Democrats and independents and just below the economy for Republicans, polling from the Kaiser Family Foundation has found.

When the foundation dug deeper, it found that voters are concerned about one thing in particular – cost, said Ashley Kirzinger, associate director for public opinion and survey research at the Kaiser Family Foundation.

“What we find is … one common theme running throughout all the voters responses and that’s health care costs,” Kirzinger said. “We know that health care is playing an important role for voters’ decisions in 2020 and what they really want to hear candidates talk about is what they are going to do to lower health care costs.”

An informal survey from WUSF and WMFE, the NPR stations in Tampa and Orlando, found that voters along the Interstate 4 Corridor are equally concerned with health care.

READ MORE: Election Coverage Along The I-4 Corridor From WUSF And WMFE

In fact, most of the voters who took the survey chose health care as their top economic issue. They picked it over economic growth and job security. Over affordable housing and the environment.

Those who filled out the survey, conducted last fall online and in-person, were split nearly evenly between their preference for two ideas floated by many of the Democratic candidates for President: Medicare for All and a government-run public insurance option. Only about 10 percent said they wanted to keep government out of the health care industry.

WUSF met with a handful of people who responded to the survey to find out why health care is important to them.

Phyllis Whitney is a retired CPA and business manager who lives in Tampa. She said she’s never been affiliated with a political party but she tends to vote left.

She’s has coverage through Medicare Advantage and loves it, but health care is still her top issue.

In fact, most of the voters who took the survey chose health care as their top economic issue. They picked it over economic growth and job security. Over affordable housing and the environment.

Those who filled out the survey, conducted last fall online and in-person, were split nearly evenly between their preference for two ideas floated by many of the Democratic candidates for President: Medicare for All and a government-run public insurance option. Only about 10 percent said they wanted to keep government out of the health care industry.

WUSF met with a handful of people who responded to the survey to find out why health care is important to them.

Phyllis Whitney is a retired CPA and business manager who lives in Tampa. She said she’s never been affiliated with a political party but she tends to vote left.

She’s has coverage through Medicare Advantage and loves it, but health care is still her top issue.

“I have a daughter and grandchildren. My daughter’s on Obamacare and my grandchildren are on Medicaid,” Whitney said.

Health insurance is extremely hard to afford for the average person, she said.

“My daughter’s insurance is a high-deductible insurance and it’s hard for her to pay the bills,” Whitney said. “I mean she pays the premiums and she’s still gotta pay for the care. The insurance company hasn’t paid a thing.”

Whitney says she’s not convinced that Medicare for All would work. And she said she feels that lobbyists in the insurance industry would never let Congress approve a government-run public option.

So, she’s still on the fence when it comes to a candidate. She was waiting to hear what former New York Mayor Mike Bloomberg would offer.

Anastasia Bizzarri is probably more familiar than most with the concept of universal health care. The middle-aged single mother from the city of Seminole grew up in Italy, where the government runs health care. She has dual citizenship in the United States.

She also knows all about the higher income taxes in Italy that help pay for it — up to 42%. So, she’s understandably skeptical of candidates who say everyone’s taxes won’t go up in a single-payer system.

“So don’t come up and tell me that my taxes are going to stay the same. Or that you are only taxing one class of citizens,” Bizzarri said. “This is a capitalistic society so these plans that are like thrown in the world don’t make sense. Because if you do a little math you know that somebody has to pay.”

She said she just wants a candidate who will explain how to pay for their health care plan. She’s self-employed as a real estate broker and has private insurance, which she pays a lot for.

“One thousand dollars a month, plus, wait, here comes the nice thing, an $18,000 (a year) deductible,” Bizzarri said.

With her dual citizenship, she can travel to Italy and pay out of pocket for care at a fraction of the cost.

“I fly business to Italy and I still spend less money visiting the best doctors,” she said.

Richard McDaniel, 43, lives in St. Petersburg with his wife and daughter.

He says the problem with the health care system comes down to companies who put profits over people.

He believes that a single payer system could work in the United States, just as it’s worked in countries like Canada, Norway and Switzerland.

“We pay double what most of these other countries pay and we are at the bottom of the pack,” McDaniel said. “We have worse infant mortality rates, lower life expectancy, more mothers dying at birth. People say it’s complicated and a single payer system isn’t going to fix everything. But we can look at the numbers and see that they pay less than us, they cover everybody and they get better coverage.”

He has heard critics of a single-payer system say that if America adopted something similar, it would force people off of their employer health insurance. He acknowledged that some unions have fought hard for those benefits.

But he has a different perspective. His wife is part of a union that is renegotiating its contract. He says, their health benefits are good, but her employer uses them as a bargaining chip to keep wages low.

“Switching to a single payer plan for someone like her in a union, that would take that off the negotiating table and they could look at wages and other benefits instead of fighting over healthcare,” McDaniel said. “So I don’t think people love private insurance. I think people love to be insured.”

Maurice O’Connell is an 84-year-old Army veteran who lives in St. Petersburg. He said he is not affiliated with any party and has voted for Democrats and Republicans throughout his life.

Through the VA system, he has seen how government-run health care has its advantages.

Recently, a health issue landed him in a private hospital and the experience gave him a greater appreciation for the VA.

“Just seeing what was offered and the way you were treated and the lack of left knowing what right is doing is very scary to me,” O’Connell said. “I just can’t believe we have a system like that, that doesn’t seem to work very well for the patient and it’s very costly.”

O’Connell said he hasn’t seen a candidate who has proposed a health care plan that he can get behind. He wants a patient-centered health care option that is modeled after the kind of care that he receives at the VA.

“I’m very impressed with the service level and how well they take care of you there and you look at that and why can’t that same sort of service be offered to people around the nation?”

Becky Schaff was totally against the Affordable Care Act when it was being proposed. Now she supports Medicare for all.

The married Orlando woman in her 30s said she started to change her mind about expanding health coverage when she saw those she loved struggle with medical conditions.

Her husband is a diabetic and some months the cost of his insulin has been as high as $1,700.

“There have been months when his take-home pay from a 40-hour-a-week skilled trade job has not been enough to cover his insulin supplies and insulin,” she said. “We’ve been looking into purchasing insulin from Canada.”

A month’s supply of insulin from Canada can be as cheap as $300, she said.

To her, universal health care means never having to worry that a medical condition will bankrupt you – or worse.

“This is a first-world country where people routinely die because they don’t go to the doctor soon enough,” Schaff said. “So when you ask me why it’s my priority when I vote, it’s because it’s a life and death issue.”