He Was An Interpreter For U.S. Forces In Afghanistan And Now He’s Driving For Uber 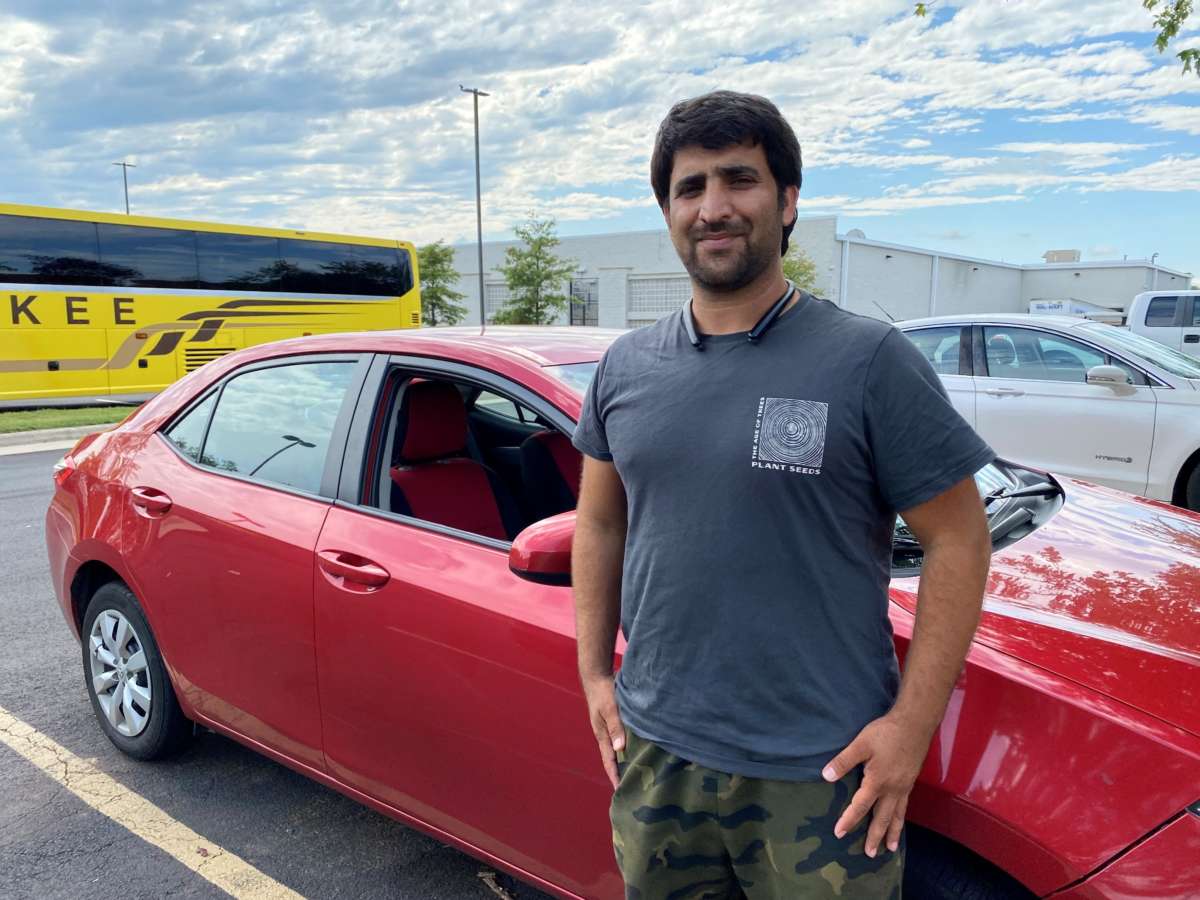 Ahmad Zai Ahmadi began interpreting for U.S. forces in Afghanistan when he was a teenager. Since coming to the U.S. as a Special Immigrant Visa recipient, he's mainly relied on gig work to support his family.
Image credit: Andrea Hsu

Ahmad Zai Ahmadi was just a teenager when he ran into a group of U.S. Marines at a bazaar in his hometown of Kandahar, Afghanistan, in 2003.

He went on to work as an interpreter for U.S. forces for nearly a decade, a job that took him all over Afghanistan. He forged friendships with American service members, including a number of high-ranking officers. His nickname was Rock.

In 2009, he applied for a Special Immigrant Visa to come to the U.S., a program set up for Afghans who’d served the U.S. government and faced threats as a result of their employment.

It took 11 years for his visa to come through.

By then, he had a wife and three children. And soon after arriving in the U.S. in early 2020, he discovered his biggest test yet: He needed to find a way to support the family.

It’s the central challenge facing tens of thousands of Afghans who have escaped their homeland in recent months as the U.S. pulled out of a 20-year war. In the early months, the U.S. government provides a safety net for new arrivals — refugee resettlement agencies help families with immediate needs such as food, medical assistance, housing and schools for kids. But when it comes to finding employment, Afghans who have come to the U.S. in prior years say they were largely on their own.

Noah Coburn, an anthropologist at Bennington College and author of Under Contract: The Invisible Workers of America’s Global War, has interviewed over 100 Afghans who made their way to the U.S.

Over the years, he’s heard countless stories about their struggles to find employment despite their skills and experience, often gained while working for U.S. contractors.

A recent survey by the nonprofit No One Left Behind found as many as half of Afghan Special Immigrant Visa holders drive for Uber, Lyft or Amazon.

Coburn is calling on the many private companies that held big U.S. government contracts in Afghanistan to step up and do more.

Ismaeil Hakimi, originally from Ghazni Province, Afghanistan, trained as a lawyer in Iran. Shortly after the fall of the Taliban in 2001, he returned home to help rebuild his country. After working with the United Nations, he was hired by the U.S. contractor PAE to work on its Justice Sector Support Program, to help build a fair and effective criminal justice system for Afghanistan.

After surviving a Taliban attack on the Ministry of Justice and numerous other threats, a colleague urged him to apply to come to the U.S. through the Special Immigrant Visa program. His application was approved in 2014, and he and his family settled in San Diego, where through a friend, he found work as a teacher’s assistant at a prep school.

The cost of living in southern California was high, so after a couple years, Hakimi moved his family to Salt Lake City where the landscape was reminiscent of home. His children, by then old enough to work, found jobs at Target, Walmart and at the airport, but he had a harder time. He didn’t expect to be able to use his training as a lawyer given his lack of familiarity with the American legal system, but he could not even land a job at the local grocery store Harmons.

Hakimi was out of work for three months until he finally got what he considers a big break. He was hired at the University of Utah’s Marriott Library, to help students and other patrons with research. Today, he is working to build the library’s Middle East collection.

He considers himself lucky. His children are now in college at the University of Utah, studying computer science and medicine.

“We are very happy here,” he says.

“They get kind of lost in limbo,” she says.

Some people need additional certifications to work in the U.S. Some need introductions to jobs that didn’t exist back home. Often what they need most is help presenting their experience in ways that make them more marketable to U.S. employers.

She points out that many of the Afghans who make it here are college graduates. They’re lawyers, engineers, accountants.

“That’s talent we’re leaving at the table,” says Krause-Vilmar. “It’s a missed opportunity for our country.”

At this particular moment it’s a huge opportunity, given how desperate employers are to find workers, she says. There are nearly 11 million jobs open in the U.S. right now.

That was not the case when interpreter Ahmadi landed in the U.S. back in January 2020. Coronavirus was taking off around the world. By spring, tens of millions of Americans were being laid off.

Heeding the advice of the Afghan community in northern Virginia, Ahmadi got his driver’s license. With the help of a retired U.S. colonel, he was able to buy a car. He started delivering food for Grubhub and DoorDash, working from 8 a.m. to 8 p.m., seven days a week. Later, he also started driving for Uber and Lyft.

It’s decent money, but the costs of working in the gig economy are high. He has to pay for gas and insurance, and he doesn’t get to see his children.

Last year, he got a job at McDonald’s for five months as a cashier and customer service representative. But the $10 hourly wage wasn’t even enough to cover rent. He then moved to Walmart, which paid $12 an hour, but the hours were erratic, and the pay still wasn’t enough.

Ahmadi has a high school education and various certifications from Afghanistan. In the many years it took to get his U.S. visa, he worked as the general manager of a fuel delivery company and started his own travel agency, building up a bevy of skills, including in database programming.

But he has yet to find an opportunity to put those skills to use in the U.S.

He’d like to get an American degree but can’t afford to take time off from work to enroll in classes.

The U.S. exit from Afghanistan did open a brief opportunity, one that allowed Ahmadi to take a break from gig work for a couple weeks.

He heard that interpreters were needed at the expo center near Washington Dulles airport to help process Afghans who were arriving in the U.S. He speaks both Pashto and Dari and was offered the job on the spot.

The pay was good, so he worked double shifts, from 6 a.m. to 10 p.m., to bank as much money as possible while he could. What he saw in those long hours was sobering. Many of the new arrivals he encountered do not even speak English.

“I’m so worried about these people,” says Ahmadi. “Life is very challenging in the United States.”