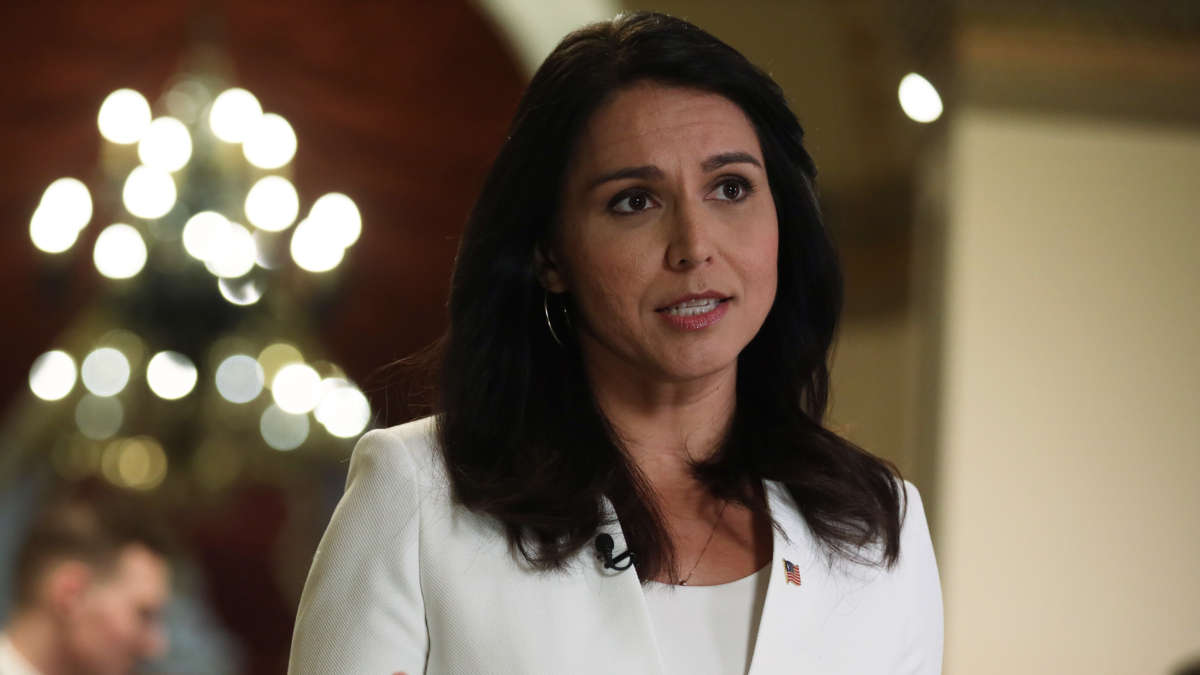 Rep. Tulsi Gabbard had staked her candidacy on an anti-war platform but faced criticism for past positions.
Image credit: Alex Wong

Tulsi Gabbard, the Hawaii U.S. representative and Iraq war veteran who has stirred controversy within her own party, is suspending her bid for the White House.

She had been one of only three candidates left in the race for the Democratic presidential nomination, despite only garnering two delegates so far.

Gabbard made the announcement in a video posted Thursday morning, and said “it’s clear that Democratic primary voters have chosen” former Vice President Joe Biden to be the person to take on President Trump in November. In the video, she says she’s “offering [her] full support” to Biden “in his quest to bring our country together.”

The Army National Guard vet added that Biden’s late son Beau, a fellow member of the guard, was a friend.

Gabbard had endorsed Vermont Sen. Bernie Sanders in his 2016 presidential bid, and she was complimentary of him in the video posted Thursday. Sanders is assessing his campaign after his latest string of primary losses to Biden.

In the video, Gabbard speaks about the novel coronavirus, saying: “The best way I can be of service at this time is to continue to work for the health and well-being of the people of Hawaii and our country in Congress, and to stand ready to serve in uniform should the Hawaii National Guard be activated.”

Gabbard, who won her two delegates from American Samoa on Super Tuesday, staked her candidacy on an antiwar platform but never shook criticism for her decision to meet with Syrian President Bashar al-Assad in 2017. She also faced backlash for past positions on LGBTQ issues such as gay marriage, for which she later apologized. In December, she angered many Democrats by voting “present” on both articles of impeachment against Trump.

Elected in 2012, Gabbard was the first Hindu and one of the first two female combat veterans elected to Congress. She began building a national profile during the 2016 election, when she resigned from her post as vice chair of the Democratic National Committee to endorse Sanders for president.

When she announced her own presidential run on CNN in January 2019, Gabbard said: “There is one main issue that is central to the rest, and that is the issue of war and peace.” Gabbard had stepped down from the Hawaii Legislature in 2004 to serve her first two deployments in the Middle East.

“I will bring this soldier’s principles to the White House, restoring the values of dignity, honor and respect to the presidency and above all else, love for our people and love for our country,” Gabbard told the crowd during her formal campaign launch in Honolulu. “I ask you to join me, join me in putting this spirit, this spirit of service above self at the forefront and to stand up against the forces of greed and corruption.”

But her campaign began on shaky footing, with her campaign manager resigning within weeks of that surprise announcement on CNN.

Gabbard’s most memorable debate performance came over the summer in Detroit, when she attacked California Sen. Kamala Harris for her record as a prosecutor, but the attention didn’t translate to a bump in the polls and Gabbard eventually started missing the thresholds to make the debate stage.

During the campaign, she sparred with former Secretary of State Hillary Clinton, who claimed on a podcast episode, without evidence, that the Russians were “grooming a third-party” candidate, apparently referring to Gabbard. The Hawaii congresswoman later slapped Clinton with a $50 million lawsuit.

Gabbard, who has attracted interest from some Republican voters, has said repeatedly she would not launch a third-party bid for the White House. But some Democrats still fear just that and worry a third-party bid by Gabbard could hand Trump a second term.

In October, Gabbard said she would not seek reelection to Congress in 2020.