Listen in: Haven’t found your Halloween costume yet because of a supply chain slowdown? Let Margaret Guerrero and her family be your inspiration. 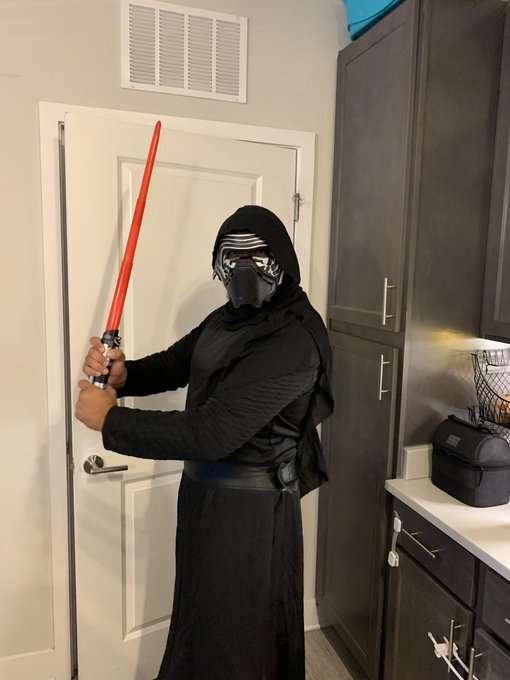 If you haven’t bought a Halloween costume yet, good luck!

Thanks to a supply chain slowdown across the country, these are just the latest commercial products to face a shortage. It’s led parents to get creative as they search, high-and-low, for costumes.

Photo: Mom and son as Rey and Venom.

Photo: Baby as Baby Yoda aka The Kid.

Winter Park resident Margaret Guerrero has been on a mission for a few weeks now.

“And so I’m looking for the costume and I can’t find it anywhere you know I’m going to the stores I’m going on my lunch break I’m checking online.”

She and her family of four are planning to have a Star Wars-themed group costume and she wants to be Rey. She’s had a tough time finding the Jedi Master’s iconic flowing white robes anywhere in stores or online.

“And it’s just and I’m not thinking it’s like such an in-demand costume that I can’t find it and you know at one point I’m like okay, I guess we’re just gonna have to give up on our Star Wars dream then you know, do the Flintstones or something. I don’t know.”

From Alabama to Alaska and California to Connecticut, a slowdown in the U.S. supply chain has led to a nationwide Halloween costume shortage. It’s affecting all sorts of goods from groceries to business supplies to electronic materials. Cargo ship delays, too few truckers and other pandemic problems are to blame.

“But assuming that the demand signal continues, and we’re going into one of the highest retail periods in the country in the US, I would look, I would look out at July 2022.”

It just means that parents might have to get a little creative this year.

Families have scoured second-hand shops like Goodwill. In Orlando, Gladys Vidal was browsing the racks of barely-used costumes, including Beauty and the Beast and the Avengers, some still in their original packaging, weeks before the big day.

“We have noticed that customers are coming earlier for costumes and décor and I believe part of that is the supply chain and we’re very very blessed here in Central Florida. We have wonderful donors and we do not have a limit on what we have to put together for you.”

But for shoppers who have their eye on a specific make and brand of costume, it might take a lot of driving, and plenty of luck.

That’s how Margaret Guerrero finally found her Rey costume. She was in a town hundreds of miles from home for a wedding when she popped into a local store.

“And there was just one. It was so funny because there was just one Star Wars costume for women and it was Rey and it was my size. And it was one that had been returned. So there was actually like an accessory missing. And I didn’t even care I was like I’m getting this is coming home with me today. Like this is my costume. So it definitely felt like it was meant to be, you know?”

Guerrero says after all that hard work, it wasn’t enough.

While most of the family is sticking with the Star Wars group costume, her son wanted to be a character from the movie Venom instead. After all, she says, this is a time to be flexible.