Hate Wiped Away A Muslim-Canadian Family. Here’s How Friends Want Them Remembered 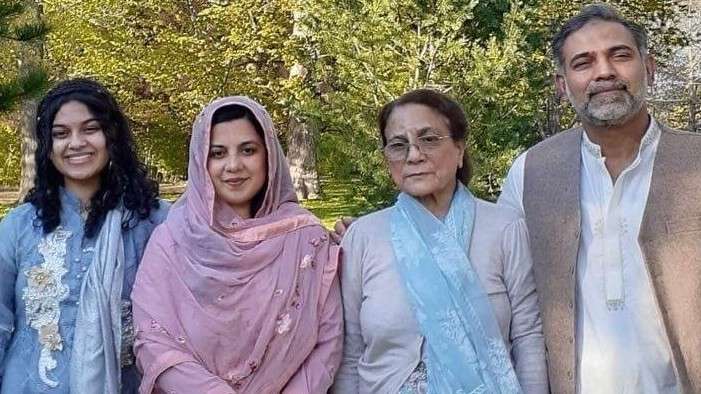 The Afzaal family members who were killed in the London, Ontario, truck attack. Not shown is the youngest son, who survived.

The attack was horrendous: Three generations of a Muslim-Canadian family killed, leaving a 9-year-old child orphaned.

The motive was horrific: Police say the pickup driver, who mowed into them, targeted them because of their faith.

But as friends gather for the family’s janazah, or funeral prayer, on Saturday, they want the Afzaal family remembered as more than just victims of a heinous hate crime.

“This entire family is a very well-known family, known to be extremely sweet, extremely hospitable, very active in the Muslim community here in London,” said Asad Choudhary, principal of London Islamic School where two of the victims attended.

“One hundred percent of the time, they were smiling. They always had great kind, positive words to share,” he told NPR.

People return to the scene to leave flowers and light candles after a vigil for the Salman family.
Steve Russell/Toronto Star via Getty Images

The attack took place Tuesday in London, Ontario, a city west of Toronto with a large Muslim population. Police say the driver struck the family at an intersection as they were out for an evening walk.

Here are their stories:

Those who knew Afzaal described him as a gentle soul who smiled when he greeted others and loved being outdoors.

“I always saw uncle outside his house, maintaining his plants, watering them,” said Afzaal’s neighbor Sana Yasir, using an honorific often used for an elder.

Afzaal, a 46-year-old physiotherapist, immigrated to Canada 14 years ago. He enjoyed cricket and attending regular prayers at London Muslim Mosque.

Jeff Renaud worked with Afzaal at the Ritz Lutheran Villa nursing home. He remembers his colleague as a humble, unassuming and quiet man who was incredibly caring toward his patients.

An 85-year-old Villa resident told Renaud how much he looked forward to Wednesdays — because that’s when Afzaal would visit him and talk about basketball.

“He worked with hundreds, probably thousands, of our moms and dads and grandparents,” Renaud told NPR. “You lose somebody with that kind of dedication to seniors, it just triples the impact.”

Friend’s of late Yumnah Afzaal make ribbons on the lawn of the London Muslim Mosque prior to a vigil.
NICOLE OSBORNE/AFP via Getty Images

Salman, 44, was working on a Ph.D. in engineering at London’s Western University.

She received her undergraduate degree in engineering in Pakistan where she was one of only two women in her class, said her friend Bilal Farooq.

The last time he saw her, Salman was organizing a STEM event for young kids.

“We lost a great human, researcher, and Canadian. I wish she is remembered for all these great qualities and not just as a victim of a hate crime,” he said.

Yasir, Salman’s neighbor of 12 years, fondly remembers the family bringing her big platters of traditional Pakistani rice and chicken when her mother was going through chemotherapy for breast cancer.

“They never thought twice about it,” she said.

Attendants of a vigil in memory of the Salman family wore green and purple ribbons.
Sana Yasir

Last summer, when she was a student at London Islamic School, Yumna decided to leave her mark by painting a large mural that she worked on each weekday despite the pandemic.

“We look at the beautiful mural and we really realize that her legacy just doesn’t stop at our school or our community in London or even Canada,” Phillips told NPR. “This is a global legacy of really stopping hate.”

Also killed in the attack was the matriarch of the family, Talat, who was Salman Afzaal’s mother. She was 74.

“What’s exemplary about them is they were very humble people while extremely accomplished,” he told NPR. “They will never try to elevate themselves above anybody, or try to feel make someone else feel lower.”

The only survivor of the attack is 9-year-old Fayez who remains hospitalized with serious injuries. More than 14,000 people have donated to a GoFundMe campaign, set up by neighbor Yasir. A portion of the money will be used to help care for Fayez, and the rest will be donated to a charity that the extended family will soon choose.

Police said Veltman did not know the victims but that the attack was planned.