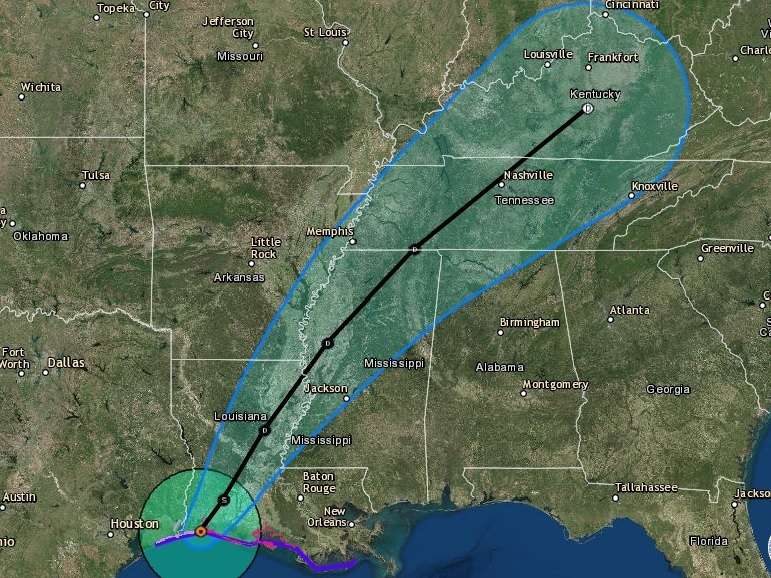 Tropical Storm Harvey has made landfall again, this time in Louisiana, says the National Hurricane Center, which said at 4 a.m. local time that the storm hit “just west” of Cameron, La.

A storm surge warning has been issued for a large section of Louisiana’s coastline, stretching from Holly Beach to Morgan City. Parts of Louisiana and Texas are under flash flood warnings through Wednesday morning, affecting areas where hundreds of thousands of people live.

As of Wednesday morning, the confirmed death toll from Harvey is eight, across four Texas counties — although that figure is likely to rise and does not include people who are missing or believed dead.

Harvey’s slow movement away from southeast Texas promises some relief from relentless rains that have inundated large swaths of Houston, Beaumont and other areas since a downpour began late last week. Late Tuesday, some Houston residents glimpsed something they hadn’t seen for days: the sun.

Harvey dumped nearly 52 inches of rain at one location east of Houston, the National Weather Service said, breaking the record for the greatest amount of measured single-storm rainfall for the continental U.S. (in Hawaii, cyclone Hiki set the national record of more than 52 inches in 1950).

Houston and surrounding areas face the threat of more flooding from rivers. And there are steep challenges in coping with evacuees using an infrastructure that’s been crippled. But there was palpable excitement Wednesday morning, when the National Weather Service office in Houston announced, “Our tropical storm warning, storm surge watch, and flash flood watch have all been canceled. Improving weather conditions to come!”

Federal and local agencies have saved more than 13,000 people from perilous floodwaters — and those rescue efforts are continuing, as some residents who tried to ride out the storm find themselves in need of aid and shelter.

Along the Texas/Louisiana border and north into western Kentucky, Harvey is expected to bring 3 to 6 inches of rain, the hurricane center says, warning of “isolated amounts up to 10 inches.”

Harvey is moving north-northwest at almost 7 mph. The NHC expects the storm’s center to “move across the Lower Mississippi Valley and Tennessee Valley through Thursday.” Slow-moving storms can mean more potential for destruction as they hang over an area. Harvey was barely moving when it devastated certain areas in Texas.

The NHC says maximum sustained winds are currently about 45 mph, down from a high of 130 mph when Harvey made landfall in Texas several days ago.

The NHC warns of tropical storm force winds as far as 80 miles from Harvey’s center.

“This storm is going to play out over the next 48 to 72 hours and it has tremendous potential to continue to drop heavy amounts of water, and to prevent people from going about their normal daily business in a safe manner,” Louisiana Gov. John Bel Edwards warned Tuesday.

New Orleans does not appear on the storm’s primary path, but officials are still concerned about the potential for floods — just as the city marked 12 years since Hurricane Katrina flooded and destroyed hundreds of thousands of homes and displaced even more people.

To make things worse for Louisiana’s largest city, not all of the drainage pumps in New Orleans are working. “The city’s pumping system has been under scrutiny since flooding earlier this month exposed infrastructure failures and unreported maintenance issues,” NPR member station WWNO reports.

“People are just on edge” in New Orleans as they wait for the storm’s impact, WWNO reporter Tegan Wendland told Morning Edition on Wednesday. “Every time it rains, people are left wondering if it’s going to be a disaster.”