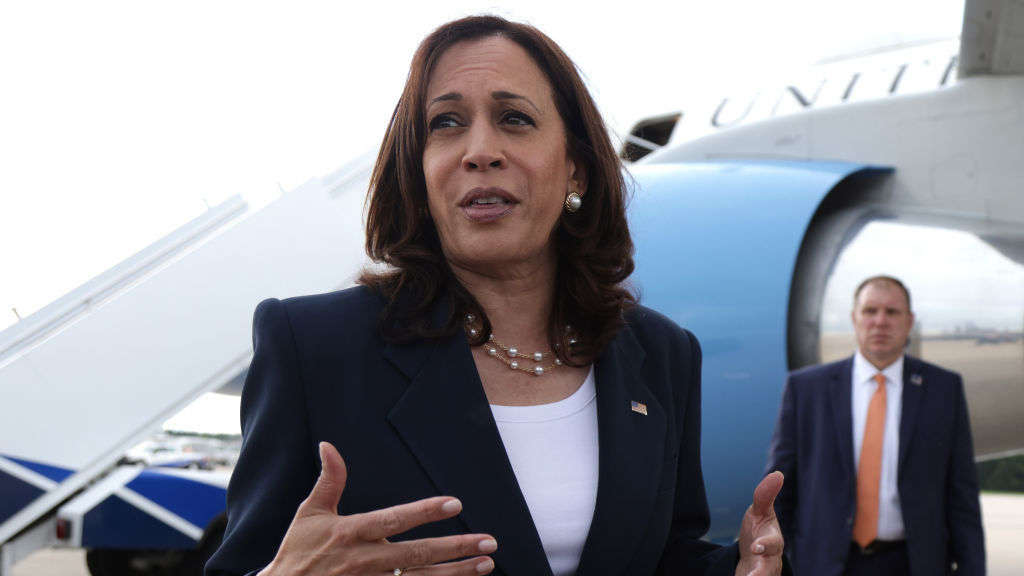 Vice President Harris visits the U.S.-Mexico border Friday in El Paso, Texas, after weeks of badgering by Republicans and at the urging of some Democrats. This will be the highest-level Biden administration visit to the border in the midst of a record surge of migrants.

While touring a Customs and Border Protection processing facility, Harris will meet with migrants who have made the treacherous journey to the United States, her spokeswoman said.

Harris is in charge of the thorny issue of migration from Central America at a time when the government has struggled to keep up with an influx of people seeking asylum at the southern border.

President Biden had promised a more humane approach to immigration enforcement than the Trump administration, and after he took office, the number of people crossing the border surged.

Back in March, Biden tasked Harris with addressing the root causes of the migration crisis, a role he had when he was vice president during an earlier spike in border crossings. Although the White House was careful to emphasize that her role was meant to be a diplomatic one, working with the Central American countries driving the arrivals, critics immediately asked why the “border czar” was avoiding the border. That’s not actually a title she ever had.

The Biden administration had intentionally avoided having Harris visit the border until now, though as a senator from California she had made the trip.

Harris will be joined by Homeland Security Secretary Alejandro Mayorkas, whose portfolio really does include border enforcement, Illinois Sen. Dick Durbin, an advocate for young immigrants known as Dreamers, and Congresswoman Veronica Escobar, who represents El Paso. Both Durbin and Escobar are Democrats and administration allies.

The root causes of migration are long-standing and seemingly intractable, including poverty, violence, natural disasters, climate change and corruption. But they are also less politically charged than border enforcement and the challenge of dealing with families and unaccompanied minors seeking asylum in the United States.

Earlier this month, Harris visited Guatemala and Mexico to talk about those root causes and highlight U.S. programs aimed at giving people in Central America “hope” that “if they stay, help is on the way.”

But the trip was quite nearly overshadowed by questions about why she wasn’t also visiting the border — and Harris’ response didn’t help. In an interview with NBC’s Lester Holt, she seemed dismissive of calls to visit the border, saying she hadn’t been to Europe yet, either, setting off GOP criticism.

Harris later explained that she felt the focus on the border missed the point. “We cannot be simplistic and assume that there is only one element or way of approaching the overall problem,” she said.

It would be very easy “to just say we’ll travel to one place and therefore it’s solved,” Harris said. “I don’t think anybody thinks that that would be the solution.”

Some have questioned why Harris would choose El Paso rather than the Rio Grande Valley, where many more of the recent border apprehensions have taken place. Hinting at Harris’ likely message, her spokeswoman Symone Sanders told reporters that El Paso had been the “birthplace” of former President Donald Trump’s family separation policy.

The Trump administration had run a pilot program in El Paso of arresting parents for illegally crossing the border and moving their children, including babies, into the custody of the Health and Human Services Department.

The Biden administration has sought to shift blame for the border conditions to the Trump administration, arguing they left a broken immigration system, with efforts at addressing the root causes of migration neglected in favor of an enforcement-only approach.

The trip comes a few days before Trump is set to visit the border with Texas Gov. Greg Abbott. In a statement, Trump claimed his plans prompted Harris’ border stop, even though she had committed to going while in Mexico City earlier this month.

Democratic Congressman Henry Cuellar, whose district includes 300 miles of the border, had urged Harris to visit. Cuellar praised the trip when it was announced earlier this week.

“By understanding the challenges faced on the ground, our government will be able to effectively address the pull factors leading migrants to make this dangerous journey,” he tweeted.