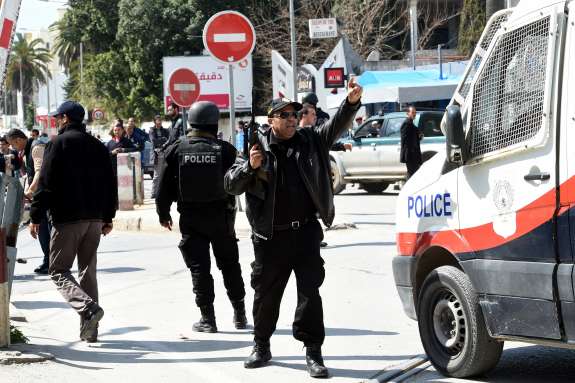 Tunisia’s prime minister says at least 21 people were killed Wednesday after gunmen stormed the National Bardo Museum in the capital city, Tunis. Seventeen foreign tourists from Italy, Germany, Poland and Spain were among the dead, according to Prime Minister Habib Essid.

Two gunmen also were also killed, Essid said, along with a Tunisian citizen and a police officer. Initial reports had put the death toll at eight.

At least 22 foreigners and 2 Tunisians were injured in the most serious attack in Tunisia in years.

Essid says the two gunmen may have had help from at least two other people who may still be at large. He said many weapons depots had been discovered, but gave no further details.

The prime minister called it a cowardly attack that would hurt Tunisia’s economy and tourism industry.

NPR’s Leila Fadel, who is in Tunisia, reported that the gunmen were wearing military uniforms and carrying assault rifles when they opened fire at the museum. The museum is adjacent to the country’s parliament building, and the BBC says members of parliament were discussing anti-terrorism legislation at the time of the attack.

Gunmen reportedly took a number of tourists hostage. They were held for several hours before being released.

Al-Jazeera English TV showed video of security forces training their weapons on the museum and the parliament building as people fled the area.

Leila said the small North African nation of Tunisia was where the so-called Arab Spring began in 2011. She says the country has been spared much of the violence seen in other countries in the region, but has struggled with a growing number of Tunisians joining the self-proclaimed Islamic State.

She said the country is considered one of the biggest exporters of militants — anywhere from one to 3,000 young men have gone to fight with the self-proclaimed Islamic State in Syria and Iraq, and there are concerns about their plans when they return home to Tunisia.

Tunisia’s prime minister said the country is under threat and made an impassioned plea for Tunisia to stand united against terrorism. He added that the security forces would be relentless and without mercy against those who try to undermine the country.