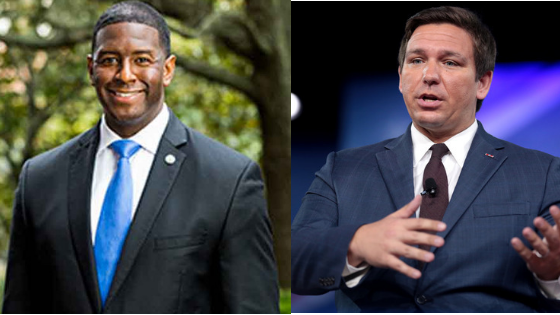 During a Facebook live announcement, King said he gained respect for Gillum during the race. “This is not a political marriage, this is not a marriage of convenience. I developed a friendship with Andrew Gillum over 18 months as we were competing.”

Republican candidate Ron DeSantis’s running mate Jeanette Nuñez has been a member of the Florida House of Representatives since 2010, representing a district in Miami.

She faced criticism for a tweet back in 2016 slamming then-candidate Donald Trump, who has endorsed the DeSantis campaign as President.

“We’re here talking about moving Florida forward, elections are elections,” said Nuñez at a campaign stop in Orlando. “It’s not secret I was a Marco Rubio supporter but that election is done and I’m looking forward to this election.”

DeSantis said Nuñez will help the state build on its economic success and lead in education reform.

Gillum and King face DeSantis and Nuñez in the general election November 6th.