Andy Aldrin On Growing Up With A Moon Walking Dad 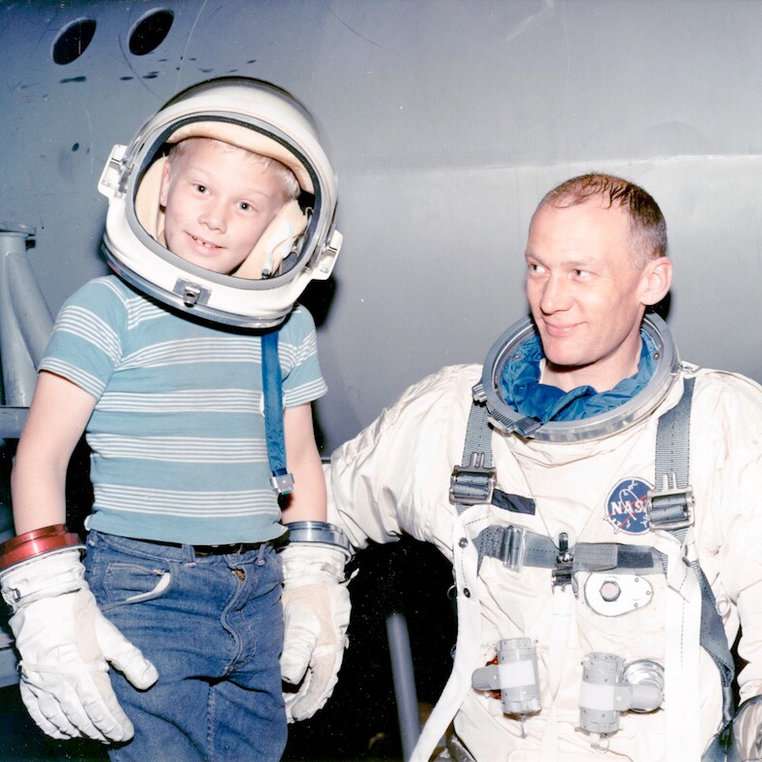 Growing up in a sort of bubble, Andy Aldrin wasn’t exposed to notoriety or a lot of media attention for being a son of Buzz Aldrin. Some of the lack of media attention was intentional, like when he and other astronaut families stayed in Houston for the Apollo 11 launch from Kennedy Space Center in Florida.

“There’s kind of an interesting story behind that, because for 45 years, I thought we were in Houston because the NASA people didn’t want the kids and the families at the launch complex with a bunch of cameras pointed at us in the event there was a problem, right? No one would want to see that. And it wasn’t until a bunch of us astronaut kids were getting together and we were kinda talking about this story, and one of them, I don’t remember who it was, said ‘No, it wasn’t NASA, it was our moms, who insisted that we stay there and not go to the launch.’ Which is an incredible testament to them and their strength, their courage, looking out for the family.”

When Apollo 11 was about to land on the moon, there was live television coverage of the first steps taken by Neil Armstrong and later Buzz Aldrin. Andy remembers being home and watching the news — waiting for the first images to be broadcast.

“I mean it was boring because I wanted to see pictures! But I was not freaked about it. And when he actually walked on the moon, I was a little worried about one thing, ’cause my dad was like hopping around on the moon- and I kinda knew he was hopping around ’cause he was just trying to find the best way of locomoting around the moon. And there was some cable, I don’t know what it was going out to but there was a cable, and I was just convinced that, y’know, that he was going to trip on that cable and fall flat on his face in front of, whatever, six hundred million people on TV, but most importantly, my fifty classmates, right?”

Luckily, Andy didn’t have to suffer that embarrassment. He worried more seriously about the ascent leg of the trip, since just one engine had the task of getting his dad back into lunar orbit and then home. The morning after returning to Earth, the family went to go visit Buzz in quarantine and did so pretty often until he was released.

“It got kinda crazy after that ’cause in some ways I was much more conscious of the amount of travel that he was doing.  And he was doing a lot of speaking. I don’t think he was really all that comfortable with that. And then they went on to the world tour, which seemed like it lasted six months, I think it was really only maybe a little over a month.” Aldrin said.

Despite the legacy of space in the family, Andy says his father didn’t expect or push him to end up in the space career field. Andy studied business, but ended up in the aerospace field.

Today, June 16th 2019, is the 50th anniversary of the Apollo 11 launch. Andy thinks there are two things we should remember this week.

“One is that it’s incredible what 400,000 people can do when they all have the same goal and when they’re working towards the same thing. And so that was a really incredible achievement. The other thing is, we talk a lot about the technical spin-offs and all of that stuff is great, but the real spin-off from Apollo was the people and the inspiration, right?”

“It spun off a generation of engineers and leaders who did some really great things. But the other thing was that it spun off inspiration to literally millions of people. There are very few people that I run into that are doing incredible things today, that are anywhere close to my age, that don’t say ‘it was Apollo that really inspired me’ and I think that is the legacy.”