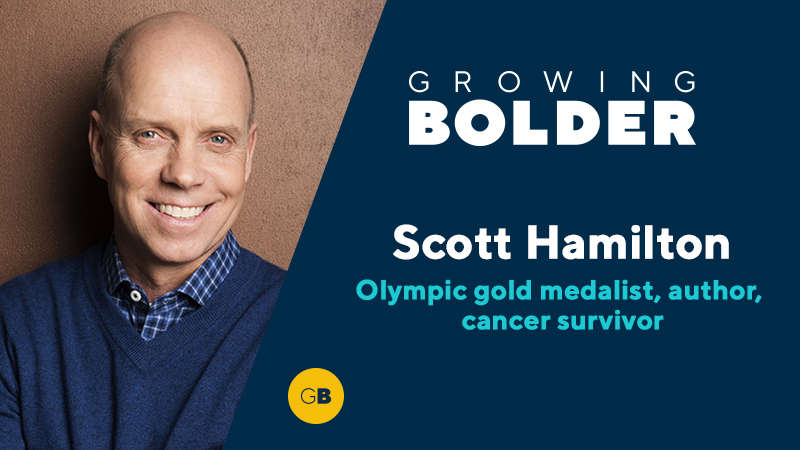 Growing Bolder illustrates that it’s never too late to start living life to the fullest. Changes are within reach of us all and no matter what your situation may be, you can make a difference. In this episode, you’ll hear how others found the inspiration and courage to start Growing Bolder in their lives.

Scott Hamilton has faced stage 4 testicular cancer and three brain tumors. He famously lost his high-profile dream broadcasting gig to two much younger people and he’s overcome a lifetime of hardships, including being adopted, being “too short” to skate and falling in love with figure skating, a sport his family couldn’t afford. The Olympic gold medalist, broadcaster, author and father says despite it all, he remains an eternal optimist. He talks to Growing Bolder about his latest book, Finish First: Winning Changes Everything, and explains why he wants to change the recent perception that a drive to be the best is a bad thing.

Robert Swan is considered one of the greatest explorers of all time. At the age of 60, he took the longest documented hike in human history, walking 900 miles in 70 days to reach the South Pole. He achieved this incredible expedition alongside his son and they became the first ever team to make the trip surviving entirely on renewable energy. That followed his feat 30 years earlier of hiking to the North Pole. His journeys have turned him into a passionate eco-warrior and he’s on a mission to save the environment. He explains how.

Then, we’ll meet another record-setter who scales mountains instead of ice fields. He just completed his latest road race up a mountain … at the age of 98. We get the one and only George Etzweiler to slow down long enough to share his secrets of active longevity.

Finally, Jacqueline Bisset has been one of the most in-demand movie stars since the 1960s. We’ll talk about her legendary career, fame, age and beauty with one of our most beloved stars of the screen.