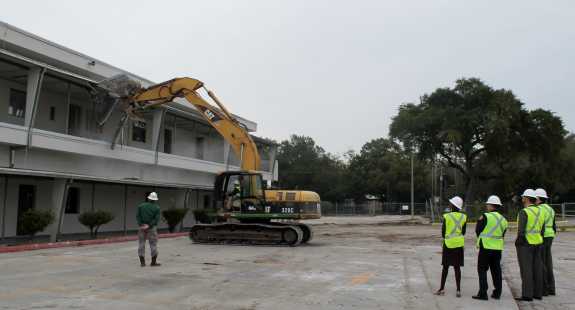 Orlando police officers will “serve and protect” from a new home in 2016. City officials and officers held a groundbreaking today on the site of the future headquarters for the police department.

Chief John Mina believes the new facility will improve policing and community relations. The current facility, he says, can no longer accommodate the growing police force.

“The side of the building that was used for the prison for inmates is currently just being used for storage and it’s a lot of unused space, and it’s just not very efficient at all.”

In the past 40 years, the number of police officers and residents of Orlando has nearly tripled.

“Now, we have 249,000 residents and 743 police officers who serve those residents, along with the 59 million visitors who come in, so as the community has changed, so have the needs of a police headquarters.”

For Mayor Buddy Dyer, the move will strengthen the department’s relationship with the community and bring business to Paramore.

“It’s also between the Citrus Bowl and downtown. It hits it both ways and I anticipate some refurbishment of some of the buildings and even some new development along the trail.”

Construction of the new OPD headquarters is expected to start in April and completed in the summer of 2016.