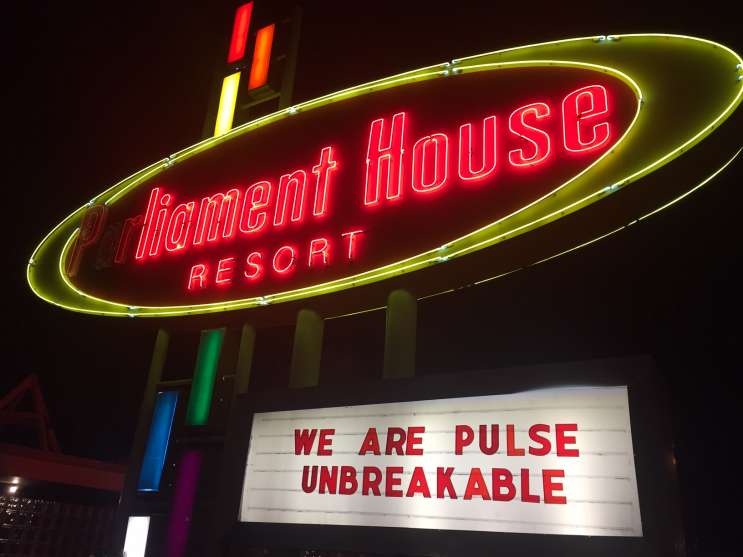 It was Latin night at Parliament House in Orlando.

She was not at Pulse Sunday night; she was working at Parliament House on the other side of town. But she got a phone call as it happened.

“But I was seeing everything what happened,” Hernandez said. “All the shooting outside, all the noise inside, through a cell phone. Someone was hiding in the dressing room showing me, showing us over here. I was watching through someone cell phone live what going on over there.”

She lost 24 friends Sunday night. She said Thursday night, there were a lot of survivors from the shooting inside Parliament House for Latino Night. .

“They don’t want to talk about it because they still affected,” Hernandez said. “But there’s a lot of survivors.”

“We know that being able to go out and meet with those people, not making them come out to some closed office somewhere, but coming out and being a united presence that’s with them where they’re at, showing our support, it’s important to convey that message to them that we’re here wherever you’re at,” Lindlau said. “If you don’t feel safe to come to us, we’ll come to you.”

She said she looks for people crying, but also people keeping to themselves. “And when I see someone kinda by themselves in a corner not engaging, that to me is a sign they maybe need a little support as well,” she said.

Brian Toy was inside Parlaiment House. He said there are a lot of the same faces we’re used to seeing, but at the same time, there are people who aren’t there.

Toy described the night as surreal – there was police out front and security.

“And the one thing I noticed when I very first walked in was something I’ve never seen at any club or bar or anywhere I’ve been,” Toy said. “And that’s boxes of tissues all around the bar everywhere you go.”

Toy’s partner is from Puerto Rico. Together they lost seven friends.

“A lot of these people know more than a handful, they know a lot,” Toy said. “So while some of us may have one or two friends we have a hole in our heart for, these people have huge holes.”

Toy said he copes by helping others. Having the grief counselors at the location has been great.

“For me, it comes in waves,” Toy said. “I can be fine. Sometimes it feels kinda numb, like it hasn’t fully set in, it’s like a movie. And then there will be times when I all of a sudden get a wave of emotion and I want to start crying. And I do, because it’s good to let it out.”