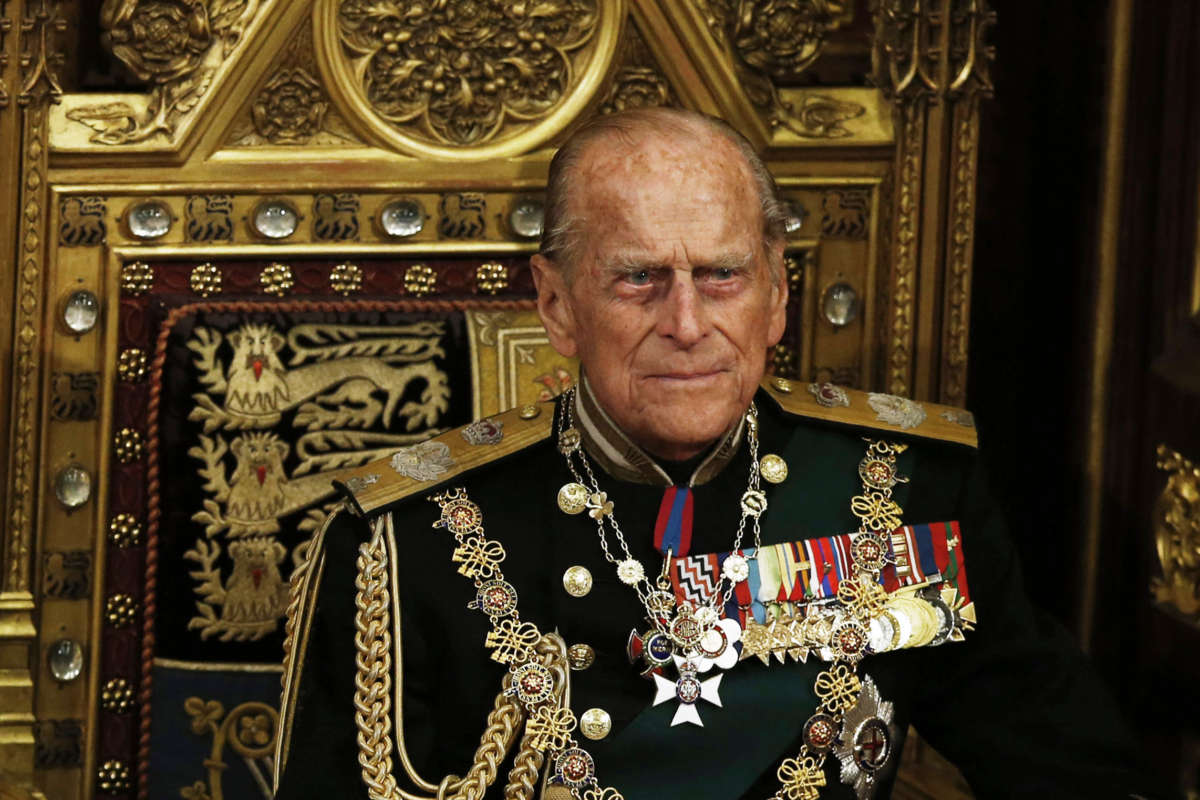 As Queen Elizabeth II's husband, Prince Philip was the longest-serving consort in British history. In 2015, he attended the Queen's Speech in the House of Lords at the Palace of Westminster.
Image credit: Alastair Grant/WPA Pool

Prince Philip, Queen Elizabeth II’s husband and the Duke of Edinburgh, died Friday at age 99, Buckingham Palace announced. He was the first male royal consort since Queen Victoria’s time in the 1800s — and the longest-serving consort in British history.

“It is with deep sorrow that Her Majesty The Queen announces the death of her beloved husband, His Royal Highness The Prince Philip, Duke of Edinburgh,” the Royal Family’s official website said. “His Royal Highness passed away peacefully this morning at Windsor Castle. Further announcements will be made in due course. The Royal Family join with people around the world in mourning his loss.”

Prince Philip of Greece and Denmark was a dashing young officer when he courted then-Princess Elizabeth after World War II, when he had served with the Royal Navy’s Mediterranean and Pacific fleets.

“To have been spared in the war and seen victory, to have been given the chance to rest and to re-adjust myself, to have fallen in love completely and unreservedly, makes all one’s personal and even the world’s troubles seem small and petty,” he wrote Elizabeth in 1946.

By the time of their wedding in 1947, he had renounced his royal titles and naval career, taken British citizenship and agreed that his children would carry his wife’s family name of Windsor.

These were significant sacrifices, says Karina Urbach of the University of London’s Institute of Historical Research. “He must have regretted it a lot,” she says. “It’s a very privileged life, of course, but it’s also a very boring life. It also meant that a man like him, who is an alpha man, who wants to lead, who wants to be recognized in his own profession, you know, couldn’t fulfill that.”

Later in life, Philip took to describing himself as “the world’s most experienced plaque unveiler.”

Philip was born in Corfu, Greece, into a deeply dysfunctional branch of the Greek royal family. His father was notorious as a philanderer and gambler. His mother, who was diagnosed with schizophrenia and sent to a mental hospital, became deeply religious. Young Philip grew up couch-surfing between royal relatives across Europe.

In the early years, Philip was considered a rebel and a modernizer. He bristled at stuffy courtiers and allowed cameras behind the scenes at Buckingham Palace.

But by the 1970s, Philip was widely seen as a crotchety, angular figure trailing his wife at royal walkabouts, emitting intermittent and much-reported gaffes. He called Beijing a “ghastly” city while on a visit there. He once asked a female navy cadet if she worked in a strip club. And he congratulated a British backpacker in Papua New Guinea for not being eaten.

Matthew Glencross, a historian at King’s College London, says these statements may have been intentional. “The man was no idiot,” he says. “The man knew when he was saying certain things. And I think he almost deliberately did it. He kind of enjoyed it, because it provided the light side of a royal tour.”

If it bothered Queen Elizabeth, she never let on. Philip was her closest companion and confidant and one of the last links to her life before the throne.

“He is someone who doesn’t take easily to compliments. But he has, quite simply, been my strength and stay all these years,” she said 50 years after their wedding. The couple had four children: Prince Charles, Princess Anne, Prince Andrew and Prince Edward.

Historians say Philip, a great-great-grandchild of Queen Victoria, was always aware that, as royal consort, he had no constitutional role in British politics or public life. He was careful not to cross that line.

But he devoted many hours to supporting British institutions and was a passionate advocate for the environment — a passion shared by his son Charles. The Duke of Edinburgh’s Award, which he founded in 1956, honors achievements of young people around the world.

Philip announced his retirement from public duties in 2017.