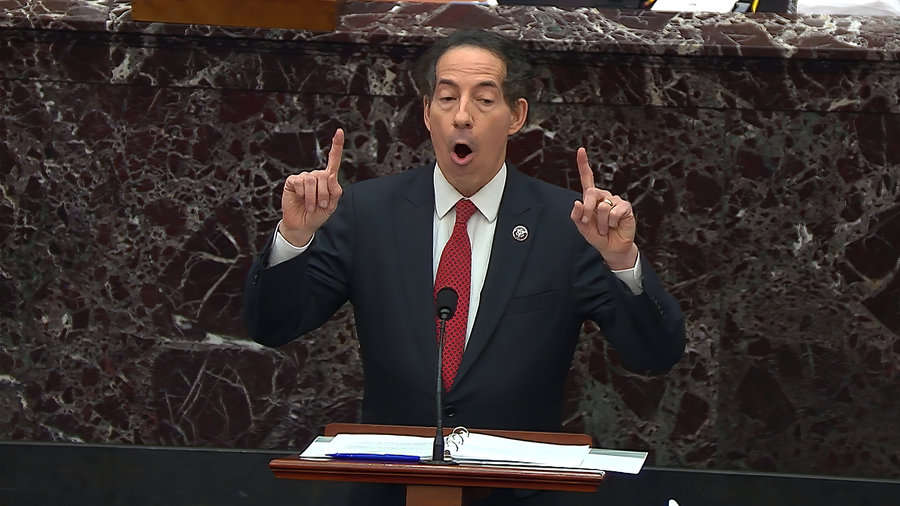 In this image from video, House impeachment manager Rep. Jamie Raskin, D-Md., speaks during the second impeachment trial of former President Donald Trump in the Senate at the U.S. Capitol in Washington, Tuesday, Feb. 9, 2021. (Senate Television via AP)

House impeachment manager Rep. Jamie Raskin, D-Md., opened the Senate impeachment trial of former President Trump with a personal speech and a disturbing video montage of the attack on the Capitol on Jan. 6.

The Senate trial of former President Trump began with a jarring and graphic video of the riot on the Capitol on Jan. 6. The lead House manager, Rep. Jamie Raskin, D-Md., used the montage to tie Trump’s message to his supporters that morning to their violent actions breaching the building and attacking U.S. Capitol police.

The resolution setting the rules for the trial designated Tuesday for a debate on the question of whether or not the Senate trial of Trump, whose term in office has expired, is constitutional. The House managers and the defense team eventually each addressed the issue. But the most memorable moments of day one of the trial were less about the arguments on that issue, and more about the contrasting styles of the two legal teams and the reactions they elicited from senators sitting as jurors in the second impeachment trial for Trump in roughly a year.

The Senate voted 56-44, as expected, that the trial was constitutional, with six Republicans joining all the Democrats, to proceed to a presentation by the managers. The vote was similar to a test vote a couple of weeks ago on the same issue, with one Republican, Sen. Bill Cassidy of Louisiana, changing his vote. He said he was persuaded by the arguments from the managers that the trial met the standard to move forward.

On Wednesday, House impeachment managers will begin presenting their case, starting at noon and lasting up to 16 hours over two days.

Here are some takeaways from the first day and what to expect next:

Even before the trial started, Senate Majority Leader Chuck Schumer told reporters that the managers would reveal some new evidence. They signaled going into the trial that lawmakers themselves were witnesses, since they were present for the attack and many were whisked out of the House and Senate chambers as pro-Trump extremists crashed through windows and doors and vowed to “take the building.” Some pledged harm to Vice President Pence and top Democrats.

Raskin, a constitutional law professor, prefaced that his presentation would be free from “extended lectures” and “based on cold, hard facts.” He then rolled a highly produced video that he said depicted the timeline of the events both outside starting at a rally that President Trump headlined, and inside as both chambers gathered for their constitutional duty to count and certify the electoral votes. It was hard to watch, and according to pool reporters inside the Senate chamber, some senators looked away. When it concluded, the chamber was silent. Raskin said after the images finished on the monitors senators were watching, “if that’s not an impeachable offense, then there’s no such thing.”

A central theme in the managers’ arguments is that a president is accountable for conduct from day one to his final day in office. “A January exception is an invitation to our founders worst nightmare,” Raskin said, using a phrase that is shaping up to a mantra for the prosecution.

Referring to Trump, Raskin said, “he wants you to decide that the Senate is powerless” by deciding in the defense’s favor that you cannot hold the former president to task for his role in the insurrection, amounting to a get-out-of-jail-free card.

Colorado Democratic Rep. Joe Neguse cited conservative legal figures to appeal to Republican senators, noting leading figures in the Federalist society, as well as GOP attorney Chuck Cooper, agreed with their position that a former president could face prosecution, and that even though removal from office was not on the table, disqualification from running for future office was contemplated by the founders.

Rhode Island Democratic Rep. David Cicilline attempted to rebut arguments from the defense that Trump, like other politicians, uses inflammatory language, but that doesn’t mean he incited the riot. Cicilline said he did stand apart because he was the president of the United States, who was arguing to his base that the only way he could lose was because of a conspiracy.

He asked, “Does anybody believe the Capitol attack would have occurred if not for Trump?”

Trump defense team attorney, Bruce Castor Jr., a former prosecutor from suburban Philadelphia, was the lead-off speaker. He began his remarks name-checking some senators and discussing their roles, and it was unclear how his musings would form the basis of a cogent legal argument. His presentation was hard to follow as it jumped from what appeared to be a stream of conscious talk that ignored the constitutional issue at hand.

Castor also did something that former President Trump has not done yet — he acknowledged that the voters in November picked a new administration and that his client lost.

As he wrapped up his portion of the presentation and prepared to hand it over to David Schoen, his partner on the defense team, Castor admitted that he changed his strategy abruptly after listening to the impeachment managers. He thought their arguments were “well done.” He previewed that his team would have “counter-arguments to literally everything they have raised, and you will hear them later in the case.”

Schoen took over and did appear to move things back to arguments Trump allies have touted in both impeachment trials. He said that the effort by Democrats was to weaponize impeachment to remove the president from the political scene. He did make the point that the defense team decried the actions of those who ransacked the Capitol and that they should be prosecuted, hailing the work of the FBI, Capitol Police and other agencies who have charged about 200 individuals as suspects so far.

He also seized on process arguments and maintained that Democrats never got over the 2016 election results.

“It is a function for the insatiable lust for impeachment in the House for the last 4 years,” Schoen said. He then played a video clip reel that showed a series of House Democrats pushing for impeachment starting in early 2017. It featured familiar liberal figures such as New York Democratic Rep. Alexandria Ocasio-Cortez, California Rep. Maxine Waters, and Michigan Rep. Rashida Tlaib.

But it wasn’t enough. Trump was unhappy with the performance of his defense team on the opening day of his Senate impeachment trial, a source providing informal advice to the team told NPR’s Tamara Keith.

Many Republican senators also told reporters after the proceedings on Tuesday that the defense team failed in the directive to argue the case about the constitution.

Cassidy said they did a “terrible job,” and called it “disorganized, random.” He said they failed to address the issue at hand.

He called the House managers “focused,” adding, “They were organized. They relied upon both precedent, the constitution and legal scholars. They made a compelling reason.

Texas Republican Sen. John Cornyn, a former attorney general in Texas, said that Castor “rambled on and on.” While he said Schoen was effective, he was blunt, adding, “I’ve seen a lot of lawyers and a lot of arguments and that was it was not one of the finest I’ve seen.”

Most Senate Republicans continue to stick with Trump

The vote at the end of Tuesday’s session with only 6 GOP senators agreeing on the validity of the trial makes it clear that it’s very unlikely there are 17 Republicans willing to break with the former president to convict him.

Senate Minority Leader Mitch McConnell, who in the days after the Jan. 6 attack pointedly criticized the president and didn’t rule out voting with Democrats, opposed moving forward with the trial. That’s a sign he sees where the GOP conference sentiment is right now. They saw the backlash to the 10 Republicans who backed impeachment in the House and believe the party is very much still attached to Trump. There are few signs his loyal base would tolerate additional defections.

Even before the proceedings started, North Dakota Sen. Kevin Cramer released a statement saying, “Welcome to the stupidest week in the Senate.”

“The result of this trial is pre-ordained. President Trump will be acquitted. I think the trial is a waste of time and is the result of seething partisan anger on the part of congressional Democrats,” Cruz said.

But Cruz, a former solicitor general in Texas, did call Raskin’s presentation “impressive.” As much as he didn’t seem to think the trial was serious he called the lead manager “a serious lawyer.”

The nine House impeachment managers, led by Maryland Democratic Rep. Jamie Raskin, will begin their allotted 16 hours of time to present their case starting at noon on Wednesday. The rules governing the trial indicate they cannot go longer than 8 hours in one day, and senators are bracing for a long session that will stretch well past dinner.

The managers are likely to use more video evidence of what happened on Jan. 6. In their pre-trial brief they outlined a narrative that argued that Trump suggested he would not accept the results of the 2020 election months before people went to the polls, and that in the weeks following the election he waged a campaign of misinformation and urged his supporters to “fight like hell.”

Trump’s defense team will not get the chance to rebut the prosecution team’s presentation until Friday.

The public lambasting by Republicans of the defense team is a clear message that they will need to step up their game. But with the outcome seemingly pre-ordained, they may feel less pressure to use up all of their time since they believe they already have a safe margin to acquit their client.