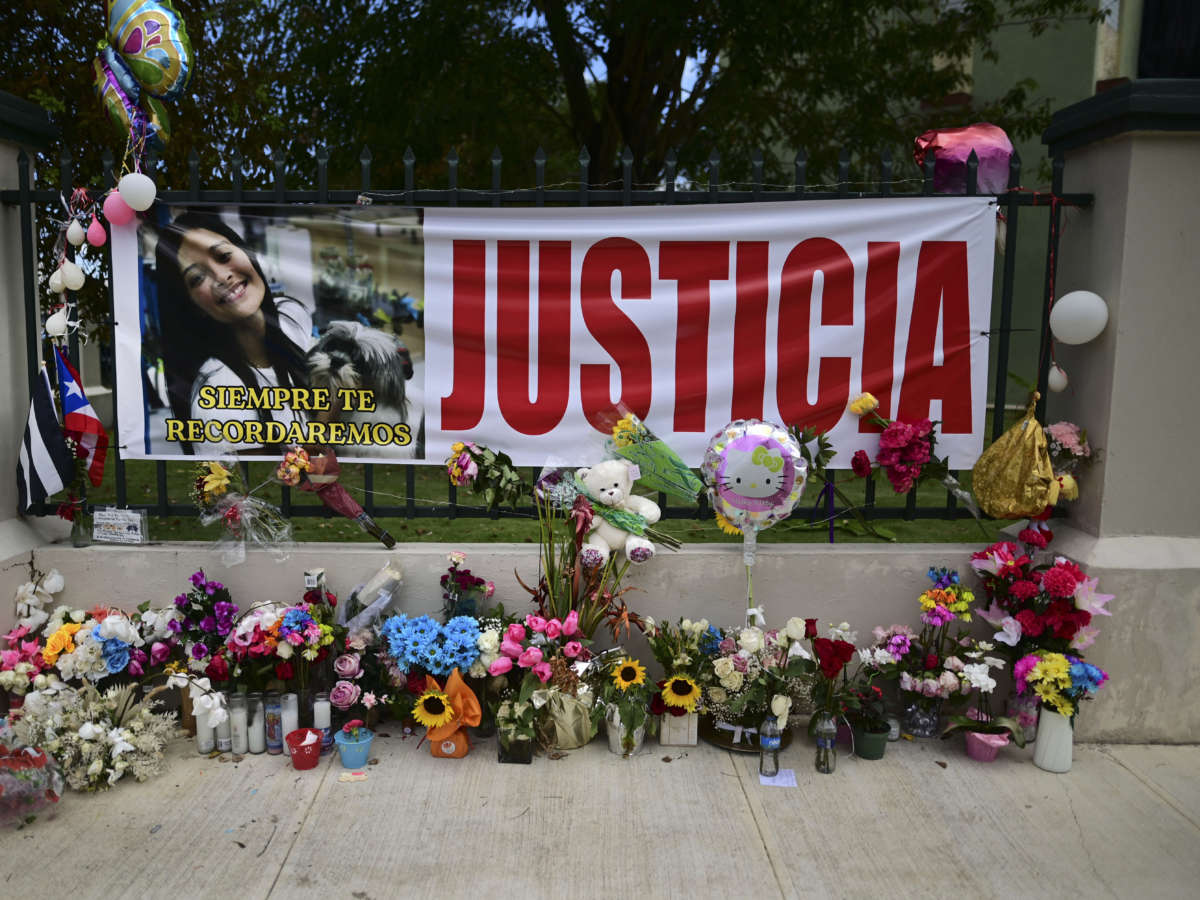 Flowers, balloons and a poster with the Spanish word for "justice" is part of a growing makeshift memorial for Keishla Rodriguez whose lifeless body was found in a lagoon Saturday, at the entrance of where she lived in San Juan, Puerto Rico.
Image credit: Carlos Giusti

A federal grand jury on Thursday indicted Puerto Rican boxer Félix Verdejo in the alleged carjacking, kidnapping and killing of his pregnant lover, a case that has rocked the island amid a scourge of violence against women.

The grand jury also indicted Verdejo’s alleged accomplice, Luis Antonio Cádiz-Martínez, who is accused of helping the 27-year-old boxer lure Keishla Marlen Rodríguez Ortiz to her death during the early morning of April 29 in exchange for some type of payment.

Many of the details surrounding Rodríguez’s killing was provided to investigators by Cádiz, who was cited in the federal complaint against Verdejo as a previously unnamed witness cooperating with the FBI.

The indictments were announced on the same day as Rodríguez’ wake, which was attended by mourners from across Puerto Rico who are outraged by the latest killing of a woman at the hands of a current or former partner. Rodríguez’s death marks the 18th femicide on the island since the start of 2021, according to NotiCentro, a local news outlet.

A complaint filed in court on Monday alleges Verdejo and Cádiz reportedly discussed ways to get Rodríguez to agree to a meeting near her home. According to the complaint, Verdejo forced the pregnant woman, whom he had known for about 11 or 12 years, into his car. According to her parents, the two went to school together and had been in a relationship for some time.

Once there, the professional boxer, whose career includes more than a dozen knockout wins, allegedly punched Rodríguez in the face and injected her with an unspecified drug, according to court documents.

That’s when Cádiz took on a more active role, allegedly helping Verdejo restrain the woman, tying her arms and feet together with a wire and attached her body to a heavy block. The complaint does not make clear if she was still alive at that point, but says that Verdejo then pulled out a pistol and shot Rodríguez. By 8:30 a.m. on that Thursday morning, her body was falling into the water below the Teodoro Moscoso Bridge in San Juan, investigators said.

Cádiz then helped Verdejo to try to get rid of Rodríguez’ car, the U.S. District Attorney of Puerto Rico claims.

During a Thursday afternoon hearing, a judge ordered that Cádiz be held without bail, at least until his arraignment on May 11. Verdejo, who self-surrendered after officials pulled Rodríguez’s body out of a nearby lagoon, was denied bail on Monday.

“Each defendant committed the offense in an especially cruel, heinous, or depraved manner,” the indictment states. It also alleges that “substantial planning and premeditation” went into causing the death of Rodríguez.

Keila Ortiz, Rodríguez’s mother, was flanked by her family during a press conference at the young woman’s wake. She urged women who are in potentially dangerous relationships or who are targets of violence to speak up.

“Women, don’t be quiet,” she repeated over and over again.

The woman’s father, José Antonio Rodríguez, told reporters on Wednesday that he doesn’t support the death penalty, the AP reported.

“That doesn’t solve anything for me. What’s done is done,” he said. “Let him remember every day who my daughter was.”