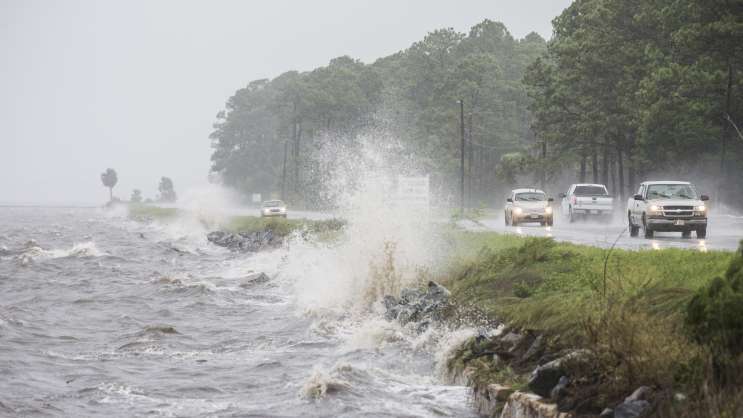 Traffic moves along U.S. Highway 98 in Eastpoint, Fla., ahead of Hermine, which made landfall early Friday.

The remaining rain bands from now Tropical Storm Hermine are still trailing across parts of Central Florida and are expected to bring periods of potentially heavy showers and high winds, tapering off toward the evening as the storm continues to move over land up the coast of Georgia and the Carolinas.

Hermine was the first hurricane to hit Florida in more than a decade when it came ashore at about 1:30 Friday morning, east of Saint Marks in the Big Bend area.

Speaking in Tallahassee late Friday morning, Governor Rick Scott said more than 250,000 Floridians lost power as the storm moved through, and some coastal counties are seeing extensive damage, including storm surge flooding of up to nine feet.

There has been one reported death in Marion County, the result of a tree falling on a man.

“We will spend the coming days assessing the damage and responding to the needs of our communities and Florida families, but the number one thing is to stay safe. Do not drive in standing water. Stay away from down power lines,” he said.

In Central Florida, The National Weather Service is investigating reports of a tornado that ripped trees out of the ground in the Winter Garden area. There are also reports of damage and lost power in the Lady Lake area.

“It’s incredibly important that everyone play their part to combat the Zika virus by dumping standing water no matter how small. Any amount of standing water can serve as a breeding ground for mosquitoes. Everyone should dump the water around their homes and businesses,” he added.

Scott’s comments come after Florida found the Zika virus in three groups of mosquitoes trapped in Miami Beach, the first time this has happened in the continental U.S.