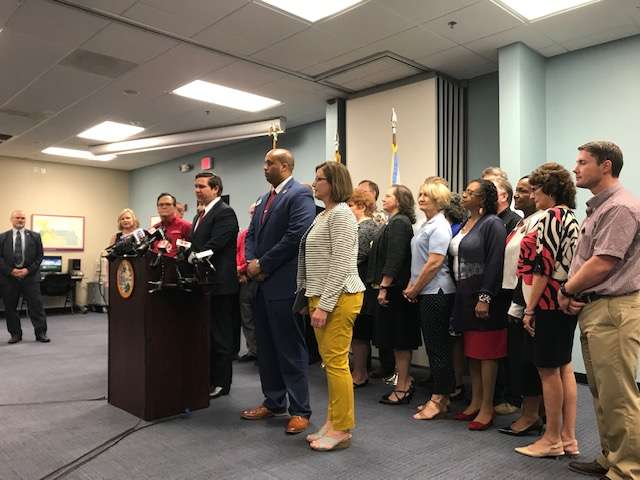 Gov. Ron DeSantis says Florida will join an electronic database that will allow it to check the accuracy of its voter rolls.

He made the announcement at the Orange County Supervisor of Elections Office in Orlando on Wednesday.

Florida will be the 30th state to join the Electronic Registration Information Center also called ERIC.

The database allows Supervisors of Elections to check other states’ voter registrations and to determine if a person is signed up to vote in multiple states.

I’m pleased to announce that Florida will join the Electronic Registration Information Center – also known as ERIC. One of my administration’s top priorities is protecting the integrity of Florida’s elections, which is why joining ERIC is the right thing to do for our state.

DeSantis says these voters will be removed from the roll of the state they don’t vote in after several election cycles.

“It’s only when they’re not voting after two cycles that they’ll be removed off of ERIC.”

He says ERIC also allows Supervisors to check registrations against Social Security records to remove a person from the roll after they’ve died.

He says the system will cost the state $1.3 million dollars.

He says he hopes the system will improve voter confidence in the state’s election process after two counties were hacked in 2016 even though he says those cyber-attacks didn’t affect the accuracy of those elections.

“It’s important to tell people that had no effect on anybody going to vote, counting the vote. None of that. It never penetrated into any of that. And the way these things are set up, getting into one of those things would not give you access to vote counts or any of that other stuff.”

DeSantis says ERIC will be used ahead of the 2020 presidential election.

He says the timing of the state’s registration in the program doesn’t have anything to do with purging the rolls of Puerto Rican voters who came to the state after Hurricane Maria.

“Obviously we did get people from Maria, but we’ve gotten probably gotten way more from other states if you look just over the last however many years. So I just think it’s a recognition that we live in a very dynamic state-it’s constantly changing. People are obviously moving here. And we want to make sure we’re in the best possible stance.”

Georgia, Kentucky and Vermont were the last states to sign up to use ERIC.