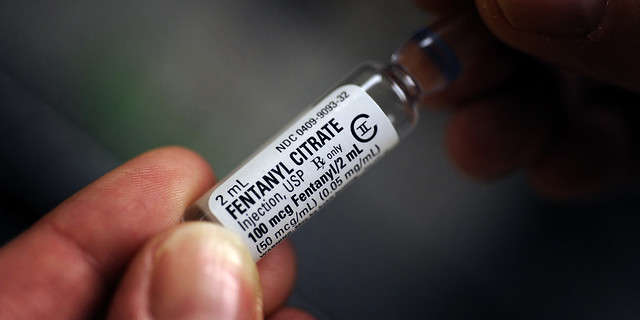 In April Governor DeSantis announced the commission of a statewide opioid taskforce that would identify best practices for addressing the state's opioid epidemic. He also reinstated the Office of Drug Control. Photo: Flickr Creative Commons

The comments came during the announcement of a drug trafficking bust in Brevard County that led to the arrests of 60 people and the confiscation of almost three pounds of fentanyl.

The six-month long investigation led to the arrests of 60 people and the confiscation of almost three pounds of fentanyl. The Office has also released more than 100 additional warrants for arrest.

DeSantis said busts like this one were why the legislature needed to pass a bill that would give Attorney General Ashley Moody access to the Florida Prescription Drug Monitoring Program.

The database tracks how often controlled substances, including opioids, are prescribed to patients.

The bill would also give Moody access to documents that are part of ongoing investigations and civil lawsuits against drug companies.

DeSantis says both could be used in the state’s ongoing lawsuit against drug companies like Purdue Pharma and pharmacy managers like CVS and Walgreens.

“These companies knew that this stuff was very addictive and yet you see the way they conducted themselves for a long time. It’s a big, big problem. Purdue Pharmaceutical is just one of them, but it’s one that is likely going to have to pay the piper.”

The bill has already been approved in the Florida House and is currently in committee in the Senate.

Both DeSantis and Moody also said the state needed to be tougher on convicted drug traffickers.

Moody said that’s especially the case when the deal in controlled substances.

“If you are a trafficker of heroin, or fentanyl, or carfentanil and it kills someone or it harms someone. We will come after you, we will find you, and we will prosecute you to the fullest extent of the law.”

The National Institute on Drug Abuse found there were more than 3,245 overdose deaths in Florida in 2017. Fentanyl was the cause of over half of these deaths.

That’s because the drug can be 50 to 100 times more potent than morphine and is often mixed with other drugs like heroin or cocaine without the user knowing.

In April Governor Ron DeSantis announced the commission of a statewide opioid task force that would identify best practices for addressing the state’s opioid epidemic. He also reinstated the Office of Drug Control that would support law enforcement efforts around drug trafficking.