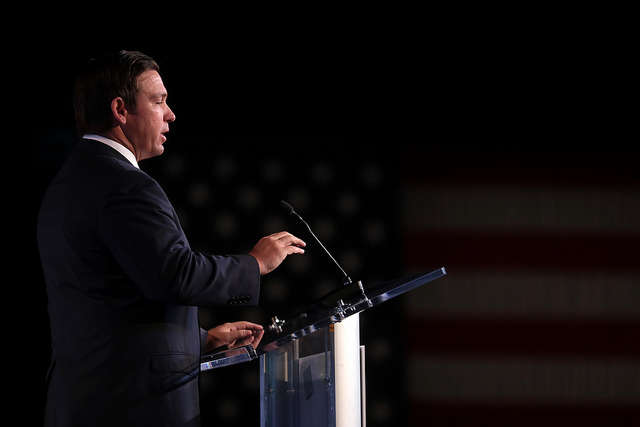 Speaking in Winter Park during a festival for Martin Luther King Jr. Day, DeSantis said he had already appointed diverse leaders to positions in his cabinet and throughout the state. Photo: Flickr Creative Common

Governor Ron DeSantis says he wants to get rid of barriers to success in Florida from racial discrimination.

Speaking in Winter Park during a festival for Martin Luther King Jr. Day, DeSantis said he had already appointed diverse leaders to positions in his cabinet and throughout the state.

“Here’s the thing. All I’m trying to do is find good people. And I think that you can find people if you’re willing to look at people at all walks of life. We’ve been able to find folks that will serve the state of Florida well but for years to come.”

He also granted a posthumous pardon to the Groveland Four, who had been falsely accused of rape.

“We pardoned the Groveland Four shortly after coming into the office. You have to be able to look at these things and say no that’s wrong. And that’s the kind of governor I’m going to continue to be.”

Earlier in the morning at Piney Grove Boys Academy near Fort Lauderdale, he said his next steps toward equality in the state would include cutting the wait list for the Florida Tax Credit scholarship. This would allow more low-income K-12 students to attend private and charter schools like the Baptist all boys’ school which he said was a model of academic and moral excellence.

“That’s what that school was thriving for. That’s what I want to do through the state of Florida. Let’s get people the tools they need to make the most of their own lives, follow their dreams.”

The Florida Department of Education reported there was a four percent decrease in enrollment in the program this September compared with last because of a drop in funding. Currently, more than 98,000 students are enrolled in the program.