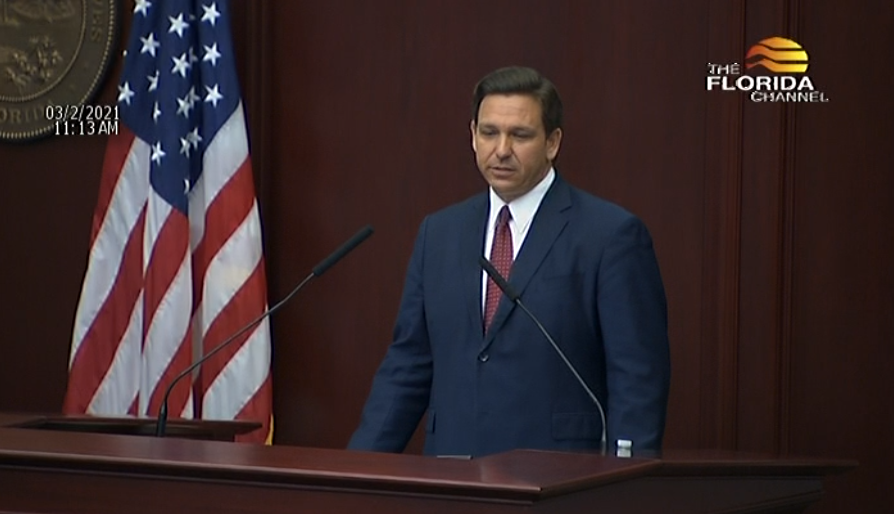 This is who we are fighting for ⬇️ pic.twitter.com/zrJeC1kcuY

DeSantis said House Bill 1 would prohibit violent assemblies and the destruction of monuments, increase the penalties for assaulting law enforcement and ban “defunding the police.”

He said the bill contains the, quote, “strongest anti-rioting reforms in the nation” and that it would send a clear message that Florida stands with officers.

“To paraphrase an old Merle Haggard song, ‘when you mess with the men and women in law enforcement, you’re walking on the fightin’ side of me’.”

He called on support for House Bill 1451 instead. The bill would prohibit the use of neck restraints and set up a database of officers who have committed major misconduct.

“Florida deserves fair and just policing policies to ensure everyone is treated with respect and that our law enforcement officers are all considered allies to all communities.”

DeSantis also praised Florida’s election system during his address while asking the legislature to pass laws making it harder to vote by mail.

His proposed measures would ban mass-mailing of vote-by-mail ballots and prohibit counties from receiving grants for some “get out the vote” initiatives.

“So let’s stay ahead of the curve on election administration. We never want to see the chaos of 20 years ago rear its ugly head in the state of Florida ever again.”

While Democrat Bobby DuBose said early voting and vote by mail are already safe ways to vote in the state.

In fact, he said this bill would only make it harder to vote.

“It’s tough to imagine this as anything but a reaction to so many voters choosing to vote by mail for the first time and not voting Republican.”

The first day of the Spring legislative session was gaveled in today as the state faces a two billion dollar budget deficit and an ongoing pandemic and recession.