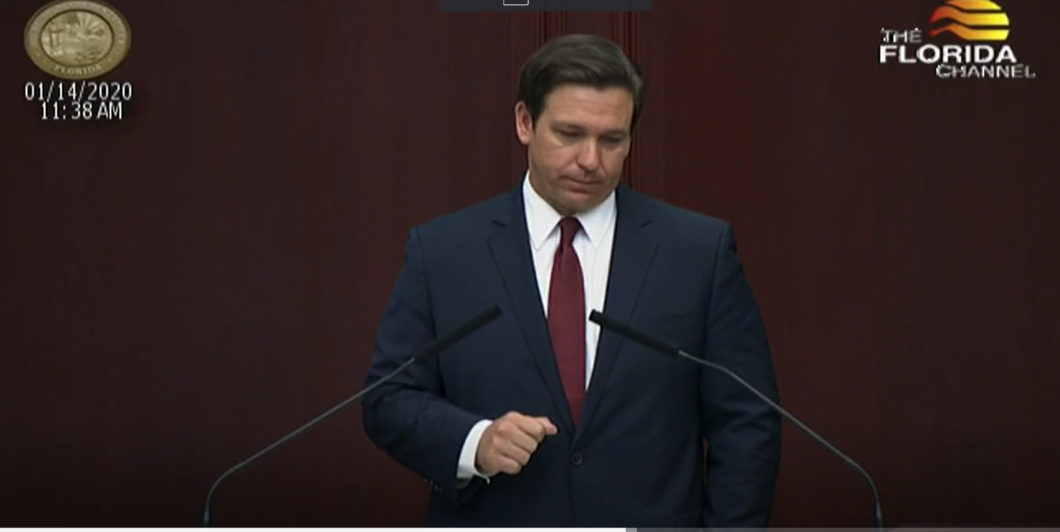 Florida Gov. Ron DeSantis laid out his goals for the 2020 Florida Legislative Session, calling for a boost to teacher salaries, more environmental spending and supporting a bill that would place more restrictions on minors getting an abortion.

The Republican governor delivered his State of the State speech Tuesday. DeSantis wants $600 million to raise teacher salaries. The governor singled out an Orange County teacher who would get a raise under the plan.

“I’m recommending we take the bold step of setting the minimum salary for public school teachers at $47,500,” DeSantis said. “That will bring Florida from the bottom half of states to No. 2 in the nation.”

The governor also called for the eradication of Burmese pythons in the Everglades and legislation to help prevent the blue-green algae blooms that have plagued the state. DeSantis is a popular governor, with 65 percent of Floridians approving of his performance, according to a Mason-Dixon poll released in December.

In the Democratic response to the speech, Florida Senate Minority Leader Audrey Gibson said half of teachers are left out of the governor’s proposed pay raise. School support staff aren’t included in the proposal as well.

“They know the governor is leaving half of their colleagues out of proposed salary increases, even though they work arm-in-arm, committed to educating our children, despite years without any additional salary consideration,” Gibson said.

DeSantis signaled his support for a bill that would require underage girls get their parent’s permission before an abortion. Current Florida law requires that parents be notified when their child gets an abortion. The new law would require parental consent.

“I also hope the Legislature will send me this session the parental consent bill that was debated last year, passed by the House, but not passed by the Senate,” DeSantis said.

Democrats quickly responded that they would fight the governor on the bill. Orlando Rep. Anna Eskamani said the bill is expected to be approved in the Florida House, and only has one committee stop in the Florida Senate.

“Florida’s Roe v. Wade, Florida’s right to privacy in our state constitution,” Eskamani said. “Now that we have a more conservative Supreme Court, my Republican colleagues want to test that with a new abortion restriction that could open the flood gate for abortion bans going forward.”

.@GovRonDeSantis says he’s waiting for the next anti-abortion bill to come to his desk this session.

Not without a fight.

Florida’s House, Senate and governor’s mansion are all controlled by Republicans. But the Senate has been more moderate than the House, often stopping more controversial bills from becoming law. The parental consent bill in the Senate will be heard in the Judiciary Committee Wednesday morning.

“You were promised the version of Florida’s American dream, but you were given a nightmare due to our affordable housing crisis after our officials raided $1.5 billion dollars from the housing trust.”

DeSantis has asked lawmakers to fully fund affordable housing in his budget requests, and lawmakers have pulled less money out than in previous years. The National Low Income Housing Coalition ranks the Central Florida region worst in the nation in the number of housing units available to low income renters.

Rep. Scott Plakon, a Longwood Republican, said Florida’s $90 billion budget will be the top priority in 2020. Plakon has filed a bill that would renew a gambling agreement with the Seminole Tribe of Florida. The tribe stopped paying the state $350 million per year after card games became legal at other locations.

“I proposed reinstating the compact and using about 5 percent of the money from the compact to offer payouts to the parimutuels, which have been in decline for years,” Plakon said.

Plakon added that lawmakers will have to balance the governor’s request to boost school teacher’s starting pay with requests to increase starting pay of correctional officers. One area where Democrats and Republicans might agree is criminal justice reform.

Both Eskamani and Republican Scott Plakon have cosponsored a bill that would end the statute of limitations for sexual battery if the victims is under 18. Lawmakers have proposed more than 3,000 bills for the 60-day session.