Gov. Northam Is Finding Himself Increasingly Alone In Once-Supportive Virginia 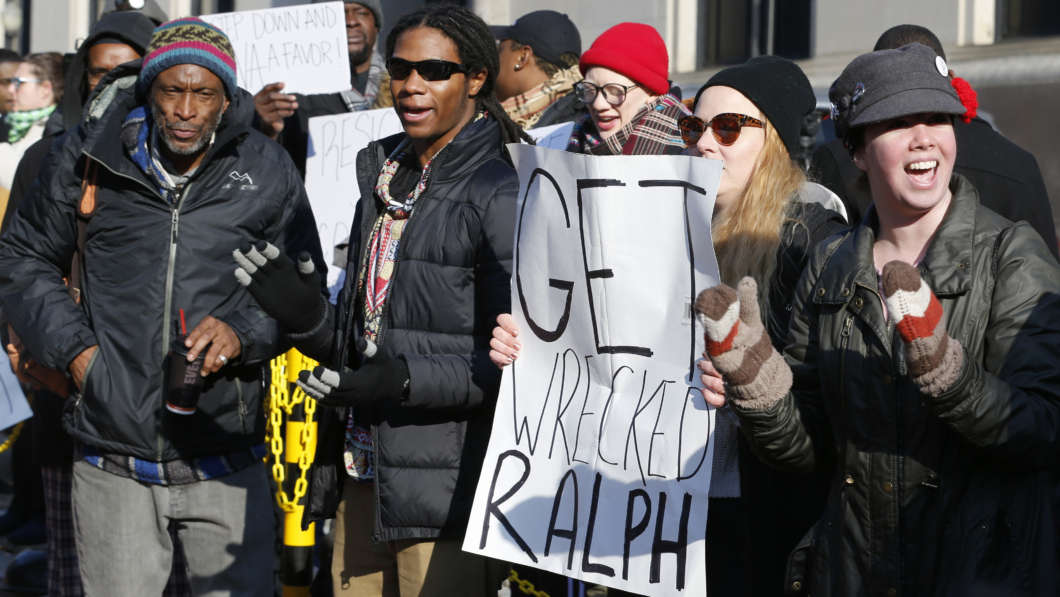 Demonstrators held signs and chanted outside the governor's office at the Capitol in Richmond, Va., over the weekend.
Image credit: Steve Helber

As calls continue for Gov. Ralph Northam to resign over a racist photo on his page in a 1984 yearbook, Virginians who have supported him are wrestling with what to make of the controversy and his insistence on remaining in office.

A few dozen people protested outside the governor’s mansion Monday morning. Many in the crowd were the same people who have been protesting the placement of a pipeline compressor station in a historically black community in Virginia. Northam has supported the pipeline.

At Jerusalem Baptist over the weekend, a predominantly black church in a small town outside the capital of Richmond, attendees expressed shock over the photo and concern and confusion about the governor’s changing statements.

Pastor Emanuel Harris didn’t mention Northam from the pulpit on Sunday. But he did call to mind the long, dark history of racist violence on this soil.

“You know how this church survived through 1880 and through lynchings and through firebombings and through all this stuff? Because you had believers who came out here. And we say despite Jim Crow and despite everything else going on, our God is bigger,” he said.

Wendy Hobbs says she was disturbed by the image and the governor’s changing statements about it.

“Thirty-some years ago is a long time, but it was in ’84,” she said. “It was a post-civil rights era. No one should’ve been making fun [of] another race or trying to make a joke out of people’s fears of the Ku Klux Klan or the blackface.”

Jeroline Harris — no relation to the pastor — grew up attending Jerusalem Baptist and still makes the drive here on Sundays. She says she watched Northam’s weekend press conference.

“I think that he’d made a really big mess of the whole situation,” she said.

Northam initially released statements on Friday, apologizing and saying he regretted his decision to be in the photo. Then he went on camera over the weekend to tell reporters that, on further reflection, he wasn’t in that photo, though he does regretfully remember appearing in blackface as part of a Michael Jackson costume around that time.

Harris says she voted for Northam. But she finds his changing story hard to understand and thinks he should resign.

“He really should not have had that press conference. … What he said Friday in his apology should have just stood,” she said. “He admit it. So how can you rethink less than 24 hours later, ‘Well, that wasn’t me’? So how the people going to really accept this?”

But not everyone here was ready to see Northam go.

“The first thing I would like to do is meet the governor and give him a big hug,” says George Fleming, a deacon at Jerusalem Baptist. He says he’s been impressed with Northam and hopes he can find a way to finish out his term.

“I’d like to give him a big hug, let him know that I forgive him,” he said. “But I would like to see him go forward and show the world that he can be a much better person.”

The pastor, Emanuel Harris, says he voted for Northam, and he agrees that forgiveness is possible. But it might not be enough.

“Just because I forgive you doesn’t mean I’ll let you mistreat me or I excuse a behavior,” he said.

Harris says he’s not yet ready to call for Northam’s resignation. But he finds the photo shocking, and Northam’s response to the scandal and his changing explanations confusing.

“We all have a past, and we all can be forgiven for our past,” he said. “But the question is, when it comes to leadership, is it your past or is it your present? And I think that’s the question that we don’t really know.”

Meanwhile, many beleaguered Democrats here are gearing up for a critical week with key legislative deadlines on the schedule as their leader finds himself increasingly alone.