Gov. Newsom Keeps His Seat After A Majority Of California Voters Reject The Recall 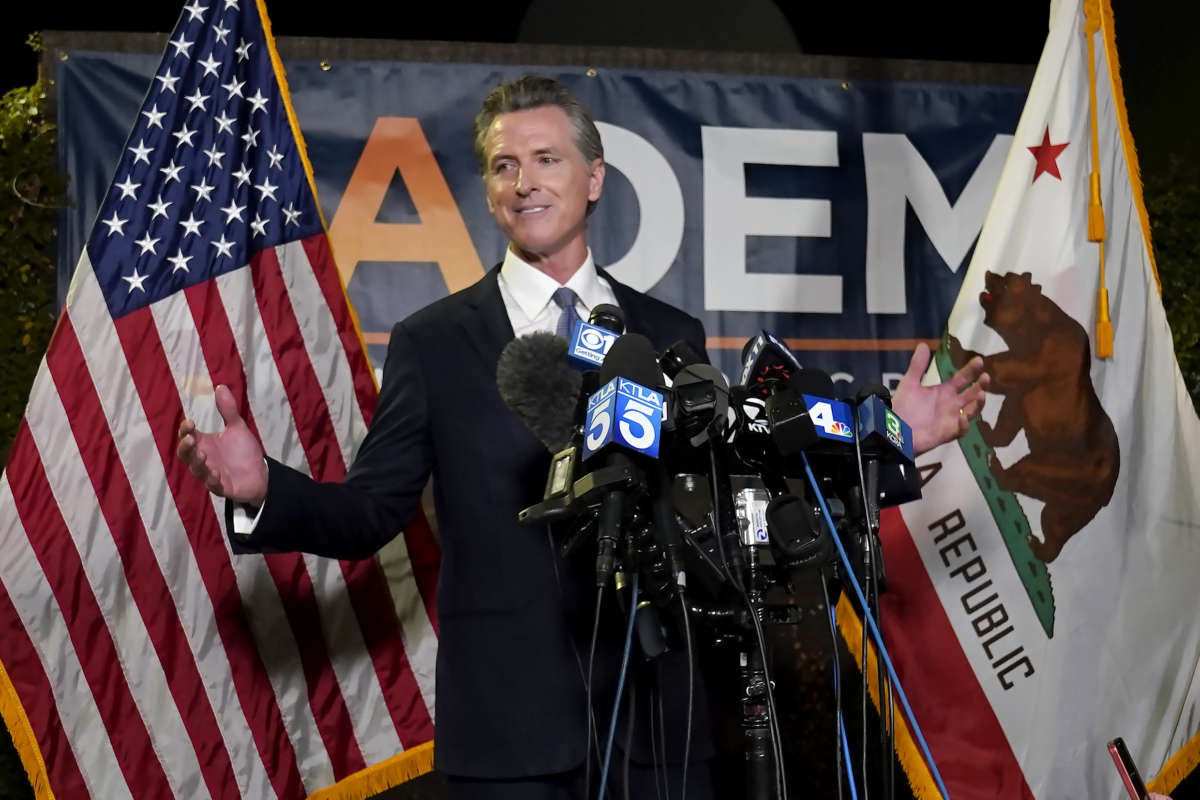 The attempt to recall California Democratic Gov. Gavin Newsom has failed, according to a call by the Associated Press, allowing the governor to stay in office until at least 2023.

Tuesday ends a campaign against Newsom that began before the coronavirus pandemic took hold in the U.S.

“I am humbled and grateful to the millions and millions of Californians that exercised their fundamental right to vote,” Newsom said Tuesday night, speaking, almost somberly, to a group of reporters. “We [have] so much more in common in our state than we give ourselves credit for,” he added, expressing how difficult life has been for Californians during the pandemic.

The governor’s victory serves to vindicate his leadership of the state through COVID-19, but he won’t be off the campaign trail for long. He’ll have to run for reelection next year if he wants to keep his seat after his term ends.

This recall petition was one of six circulated by the governor’s opponents to remove him since he took office in January 2019.

Getting the vote to the ballot took an unlikely synchronization of political fortune and Newsom’s own missteps. Last year, a judge gave the recall campaign an additional four months to collect signatures, citing the difficulties in distributing petitions during the pandemic. Later that day, Newsom dined at the upscale French Laundry restaurant in Napa Valley, ignoring his own guidance to avoid gatherings as the spread of the coronavirus picked up.

The dinner became the enduring symbol of the recall campaign and fodder for the most convincing attack against the governor: that he failed to practice what he preached.

Instead of waiting for the 2022 gubernatorial election, thousands of the governor’s detractors signed petitions to put Newsom’s fate on the ballot this year.

The resurgence of the virus also allowed Newsom to draw his clearest contrast between the candidates hoping to replace him, most notably conservative radio talk show host Larry Elder, who conceded the race late Tuesday local time.

Newsom announced in late July vaccine mandates for California state employees, health care workers and school staff, along with a mask requirement for school children — orders that Elder promised to revoke on day one if elected.

But Elder’s emergence as the clear favorite on the ballot’s second question — who should replace Newsom if he’s recalled? — allowed the governor to turn the race from a referendum into a choice. The governor spent the final days of the campaign slamming Elder’s conservative positions on climate policy, abortion and minimum wage.

Elder has been a vocal supporter of former President Trump and, in response, Democrats linked the recall effort to Trumpism and to the national Republican agenda on issues like reproductive rights and voting access.

Elder, like the former president, has claimed, without any evidence, that Trump lost last year’s election to election fraud. “There are all sort of reasons the 2020 election, in my opinion, was full of shenanigans,” Elder said earlier this month. “And my fear is they’re going to try that in this election in the recall.”

What was the recall effort about?

The first complaint listed in the recall petition against the governor was that he favored the interests of people in the country “illegally.”

But that argument largely faded into the background as the spread of COVID-19 allowed the campaign to gain momentum.

Further complaints from the “yes” campaign:

The “no” campaign’s main points:

Was the recall constitutional?

The short answer: Federal judges allowed for the recall election to move forward.

The long answer: Some legal scholars questioned the process in recent weeks because the two-question recall ballot makes it possible for the governor to be replaced by a candidate who earned fewer votes,

That’s because the governor — or any elected official facing a recall in California — needs a majority vote in the first question, which asks if they should be removed, to stay in office.

In late August, a federal judge declined to stop the recall. The lawyer who brought the suit appealed to the Ninth U.S Circuit Court of Appeals in San Francisco, but a panel of judges declined to halt the election. They will take written arguments through mid-October.

Who was on the ballot to replace Newsom?

There were 46 candidates on the ballot to replace Newsom, who encouraged those voting “NO” on the first question not to choose a candidate on the second question. For that reason, it was seen as unlikely that all but a few candidates would gain even a small percentage of the total vote. These were the top five names in the most recent polling.

Elder, a Republican, has brought his libertarian views to the Los Angeles talk radio airwaves for decades, landing a spot on the Hollywood Walk of Fame. Elder said as governor he’d pursue a rollback of the recent gas tax increase, which funds road improvements and transit projects. Elder derided Newsom’s efforts to lower greenhouse gas emissions to combat climate change and vowed to suspend some of the state’s environmental regulations to spur development.

Paffrath, a Democrat, has garnered millions of viewers for his YouTube videos, which share tips for investing in real estate. Paffrath promised a centrist governorship. In an interview with KQED, he described himself as “51% Democrat, 49% Republican” and listed his top priority as housing all of the state’s unhoused residents within 60 days, though details were scant. Paffrath also unveiled out-of-the-box proposals such as enlisting prison inmates to clean the state’s streets; offering 14-year-olds the opportunity to attend a “future school” that includes a focus on career training; and building an aqueduct to the Mississippi River to bolster California’s water supply.

Faulconer, a Republican, was the mayor of San Diego from 2014 to 2020, making the city the largest in the U.S. to have an elected Republican mayor at the time. As governor, Faulconer claimed he would have eliminated state income taxes for certain individuals and families in California. Faulconer also vowed to withhold funds from local governments that don’t build homeless shelters and then clear tent encampments. Critics in San Diego accused him of failing to respond urgently to homelessness until 2017, when a hepatitis A outbreak among the city’s homeless population killed 20 people.

Cox, a Republican, also ran and lost decisively to Newsom in 2018. Cox is a millionaire former public accountant, housing developer, lawyer and investment manager who has run for office unsuccessfully in both California and Illinois. As governor, Cox said he would have cut income taxes by $30 billion and eliminated wasteful state spending. He has also promised to cut homelessness in half by increasing treatment for unhoused people and enforcement against those who refuse help, and vowed to build more housing by cutting red tape and regulations. Cox’s plans are light on specifics.

The Republican reality TV star — a former Olympian most recently known for her turn on Keeping Up With the Kardashians — promised to focus on cutting red tape and regulations, and said she would veto any tax increase. She also attacked Gov. Newsom’s COVID-19 response, pledging to keep schools and businesses fully open. Jenner spent much of the summer in Australia filming a reality TV show and drew heat for her apparent lack of understanding when it comes to the fundamentals of running government.

Newsom will have to run for reelection next year if he wants to stay in office after his term ends in early 2023.

Counties must finish counting ballots and certify their results by Oct. 14. The Secretary of State will certify the results on Oct. 22.