At Least Two Homes Abandoned because of Abnormal Flooding in Gotha 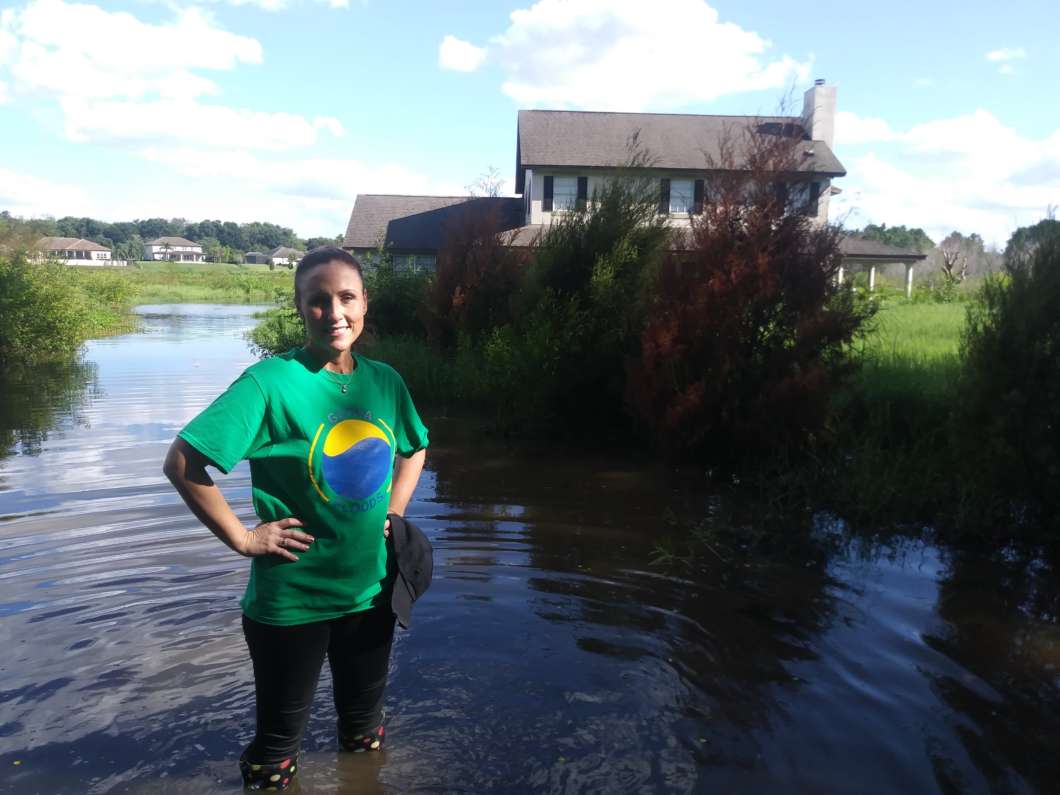 Stacey DeHart stands in the driveway of her neighbor's abandoned home in knee-high water. The lake between their houses, Lake Nally, has risen 11 feet since May 2017 and will flood her home next. (Melissa Woodford, WMFE)

Stacey DeHart is up to her knees in water as she wades through her neighbor’s driveway.

She lives next to Lake Nally in Gotha, which has risen 11 feet since May 2017. The mosquitoes are unbearable, and DeHart is worried about bacteria in the water like E-Coli and Coliform.

Gotha has a problem. Rising floodwaters are threatening homes and properties in the West Orange community, and for months, residents have been asking the county for help.

If the lake rises just a few more feet, DeHart’s property will flood. She wants the county to pump out the lake.

“My kids know we wake up every morning thinking about it, we go to bed thinking about it every night, and we’re having to put huge resources into defending our home and our property when it’s not our fault,” said DeHart, a mother of four who runs a Facebook page for residents.

WMFE has spoken with residents and confirmed that at least two homes in Gotha have been abandoned because of the rising waters. DeHart, whose property is on the verge of flooding, said she can’t wait any longer. She and her neighbors need help.

“I like to try and think I’m positive and staying on the bright side of things, but I guess I am angry at this point because it’s been long enough,” DeHart said.

Orange County is looking into the cause of the flooding. But Commissioner Betsy VanderLey said first they have to update a 2007 hydrologic basin study. The county said the study could take nine months.

“There’s a long history of this area having problems, long before I ever considered running for office, so I think it’s critical for people to understand that, as quickly as I’m trying to move things around, some things just take time,” she said.

Lake Nally is rising and threatening homes. If it rises one or two more feet, it will flood the DeHart’s home. Photo: David Boers

Devo Seereeram, a geotechnical engineer and an expert in groundwater, said he believes the flooding is most likely because of rainfall. Seereeram has been studying Gotha lakes since the 1990s and lives three miles from the flood sites. Seereeram says a drainage system for Lake Nally could cost millions of dollars.

He said Lake Nally’s like a bathtub with a clogged drain and two faucets: rainfall and underground water.

“If you’ve considered these two summers, these could be the wettest, two, back-to-back summers we have had in 100 years, so this could be the 100-year event,” Seereeram said.

The rising water isn’t just threatening homes. Floodwaters are also threatening Camp Ithiel, a Christian retreat center just a five minute’s drive away from the DeHarts’ home. It sits on flooded Fischer Lake. Michael Neff, the director of the camp, no longer uses his campfire site.

Next door, lake water has crept into a bamboo grove. Theresa Schretzmann-Myers, the first vice president of Nehrling Gardens, said the bamboos were planted 100 years ago.

“Now it’s impacting our beautiful striped bamboos from Japan,” she said. “It’s just heart-breaking to me, not just for us, but our neighbors whose houses are literally in the water.”

In the meantime, residents are doing what they can to protect their homes. David Boers owns a construction company, and even though his house was high and dry, he used heavy earth-moving equipment to build a berm for his neighbor, Nancy Dougherty, when nearby Gotha Pond started to flood.

“I would think that society hasn’t gone in such a bad direction that people wouldn’t help a neighbor out,” Boers said. “They were about to lose their house.”

Dougherty said that without the berm, her house would be underwater. “We were petrified when we thought that hurricane was coming this year because I would have had to move out,” Dougherty said.

From left to right: David Boers, Nancy Dougherty and Jim Dougherty. David used construction equipment to build a berm for his neighbors.