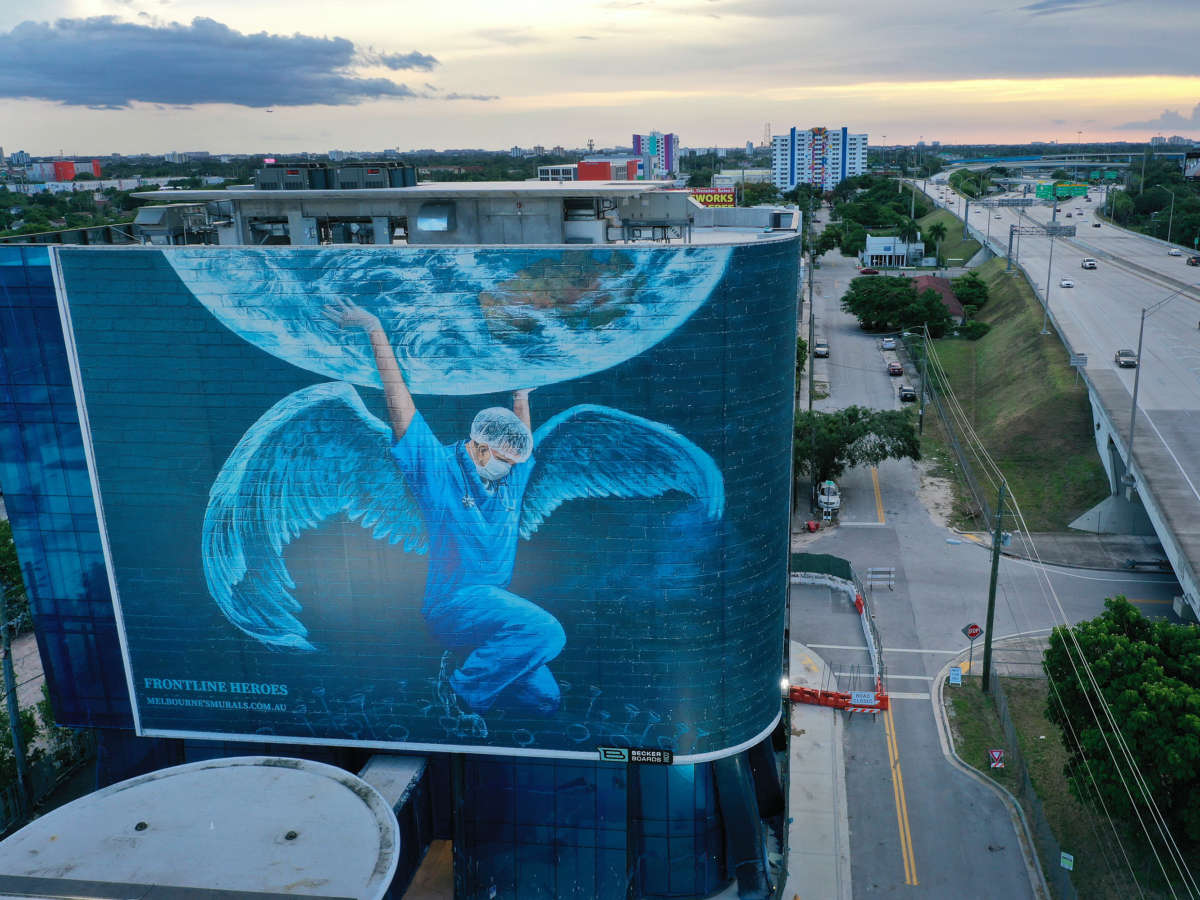 A billboard in Miami — where coronavirus cases continue to surge — depicts a medical worker holding up the world. The number of coronavirus deaths worldwide has surpassed 600,000, with more than 140,000 of those in the U.S.
Image credit: Joe Raedle

Total coronavirus deaths in the U.S. have surpassed 140,000, reaching somber new heights as surging cases continue to break records in parts of the country and around the world.

The U.S. passed the latest threshold late on Saturday, the same day the World Health Organization reported the largest one-day increase in global fatalities since May, with 7,360 new deaths. Global deaths had been averaging 4,600 a day in June and 4,800 in July.

According to data from the Johns Hopkins Coronavirus Resource Center, the virus has killed at least 603,285 people worldwide as of Sunday.

Nearly one quarter of those deaths are accounted for by the U.S.

The U.S. reports approximately 5,000 deaths each week, according to Reuters. In contrast, Canada has reported a total of 8,800 deaths since the start of the pandemic.

The WHO also reported a record number of nearly 260,000 new global coronavirus cases on Saturday.

While some countries have nearly brought the virus under control, others are seeing cases spike in record numbers. Brazil, India, Russia, South Africa and Peru are next in line for the highest number of confirmed cases after the U.S.

India surpassed 1 million confirmed cases on Friday, becoming the third country to do so. Brazil has now reported more than 2 million cases, and the U.S. passed the 3 million mark earlier this month.

Over the weekend, leaders around the world tightened restrictions in response to increases in cases.

In Hong Kong, which had initially managed to keep case numbers low, Chief Executive Carrie Lam announced its highest one-day increase in cases on Sunday — more than 100 — and enacted new precautionary measures. She said nonessential civil servants must work from home and face masks will be required in indoor public spaces. Recently announced closures of bars, gyms and clubs, as well as restaurant curfews, will be extended.

Australian states are enacting new measures in response to rising case numbers. Victoria is newly requiring people in the city of Melbourne — which is nearly two weeks into a six-week lockdown — to wear masks in public or face fines. New South Wales is imposing restrictions on “high-risk activities” including singing in choirs, dancing at nightclubs and bars and dining out in groups larger than 10 people.

New restrictions also took effect in Israel on Friday, with gyms ordered to close and restaurants limited to takeout and delivery only. Additional nonessential establishments must close on weekends, such as stores, malls, hair salons, pools, tourist attractions and beaches.

And officials in Ireland announced earlier this past week that the country will delay its next phase of reopening until mid-August, keeping bars closed and gathering limits in place for about a month longer than planned.

Within the U.S., hard-hit states like California, Arizona and Texas have closed bars, delayed reopening plans and tightened other restrictions in recent weeks. Many have implemented statewide mask mandates. Others, like Florida, are enacting more closures and mandates at the local level.

The Centers for Disease Control and Prevention reported more than 74,700 new cases and 918 new deaths in the U.S. on Saturday as Missouri, North Carolina, South Carolina and Wisconsin all broke state records for the number of new cases reported in a single day.

On Sunday, South Carolina reported 2,335 new cases, marking its highest single-day increase since the start of the pandemic, though it said 526 of those were from Friday.

Florida reported more than 12,000 new cases on Sunday, its fifth consecutive day of infections past the 10,000 mark. It also reported 89 new deaths. According to Reuters, deaths in the state have risen by 78% over the last two weeks compared with the previous two weeks.

In an interview with Fox News Sunday, President Trump downplayed the severity of the virus and called the U.S. mortality rate one of the lowest in the world. Of the 20 counties currently most affected by the pandemic, the U.S. is ranked eighth highest for its observed case-fatality ratio.