Gillum Concedes After Historic Campaign, Vows To “Fight” On For Democratic Values 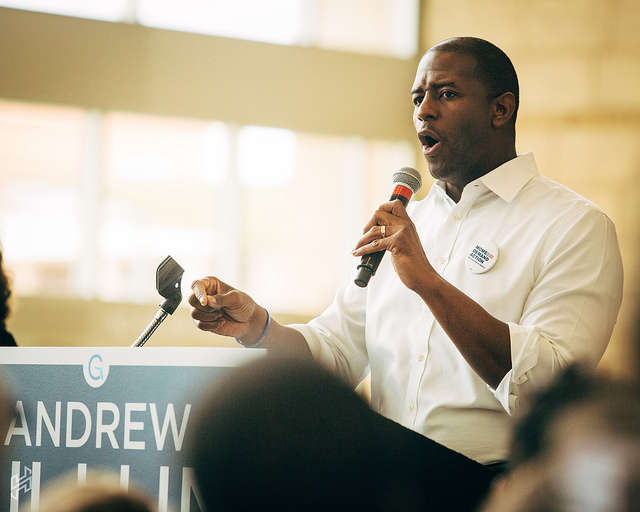 For the Gillum campaign, Election Day started at midnight, with a rally and concert at Gillum’s alma mater, Florida A&M University.

The school’s marching band opened for headliners P.Diddy, DJ Khaled and other celebrities pulling for a Gillum win.

Hours after the concert, the Gillum campaign and supporters waited for election results on the campus’ main courtyard.

Kiara Weir is a FAMU junior from Fort Lauderdale.

“People went back home because they didn’t change their address to Tallahassee.”

Three-point-nine million people voted for Gillum. He lost to DeSantis by one percent.

Andrew Gillum ran his campaign for governor on both of his hometowns.

In the video announcing his run more than a year ago, Gillum said his childhood in the Richmond Heights neighborhood of South Miami-Dade informed his platform: funding for public schools, affordable health care, better economic conditions for working people.

His other home is Tallahassee — where his record as mayor plagued his campaign.

“I’m proud to be the mayor of Tallahassee, but …”

During the contentious campaign, the candidates accused each other of being radical, extremist, liars.

And race — was at the forefront.

“The last thing we need to do is to monkey this up.”

“I think he was clear about what he meant. He understood the dog whistle that he was blowing.”

DeSantis has maintained he is not racist. He said everyone in Florida would get a, quote, “fair shake” if he was governor.

Gillum embraced his status as the first black major party candidate for governor in Florida, especially in how he spent the final days of his campaign — with what he hoped would be the celebratory events at Florida A&M.

After voting on the morning of Election Day, Gillum was asked to comment on the historic nature of his run.

Voting with his wife and three small children, he seemed comfortable, calm, confident.

Thirteen hours later, he was holding back tears during his concession speech.

“I sincerely regret that I couldn’t bring it home for you.”

As the words caught in his throat — his wife stepped up to rub his back.

He stressed that he would keep fighting for the things he and his supporters believe in — like higher pay for teachers.

Florida has a dark history of slavery, institutionalized racism and racial violence — Reginald Ellis is associate dean of the graduate school at Florida A&M and an expert in African American history. He says Florida’s past affects what happens today.

“As African Americans are moving into those higher-level positions, there has historically always been some level of pushback.”

He argued that during this campaign for governor, racism from the GOP was “overt” and “profound.”

Some black voters said they were impressed by how Gillum embraced his identity and called out racism.

“So often people are afraid to tackle racism.”

“I felt like I was being heard every moment that he spoke. He actually spoke for me.”

Another campaign volunteer — Ursula Staten — said Gillum’s run was historic, even though he lost.

“It’s a start, you know? We’ve never even had a nominee.”

She said she believed he helped create opportunities for other black candidates in the future.