Get Caught Up: Key Takeaways From Tuesday’s Impeachment Hearing 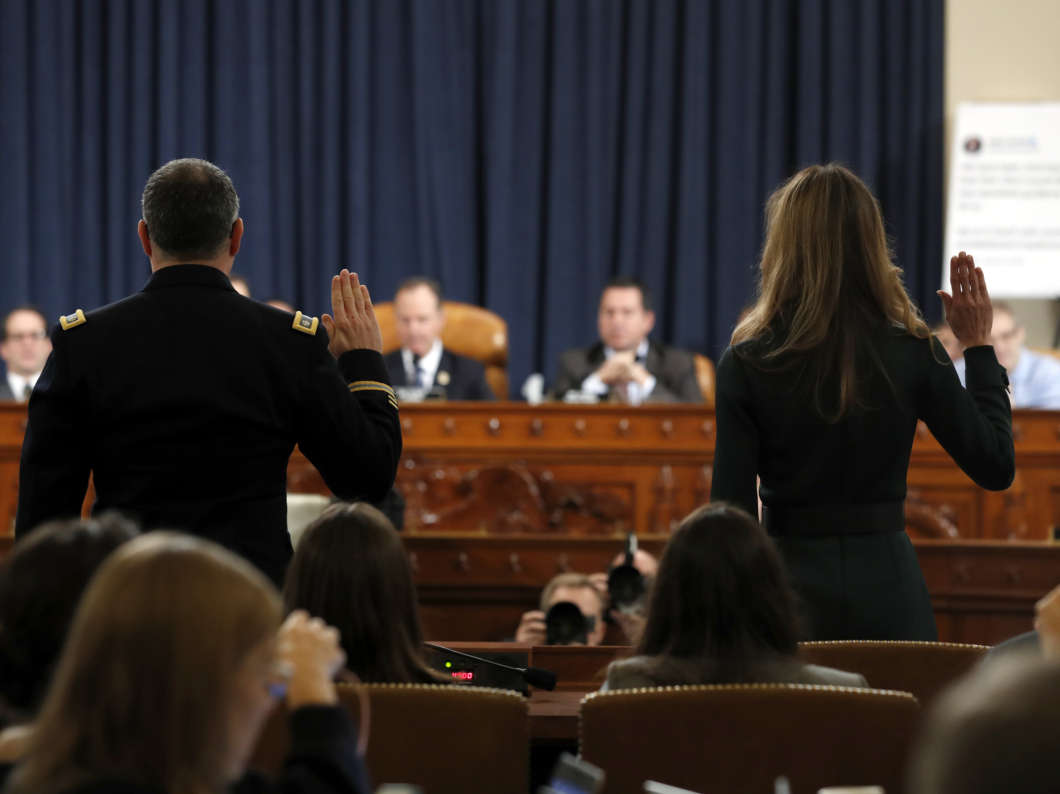 The Kentucky Republican told reporters he would convene a Senate trial as required by the Constitution if he receives articles of impeachment from the House — but he reiterated that he believes Trump would prevail.

“It’s inconceivable to me that there would be 67 to remove the president from office,” McConnell said.

Democrats in the House nonetheless convened their latest public hearing on the other side of the Capitol. They heard from three current or former White House insiders who listened firsthand when Trump asked his Ukrainian counterpart for investigations that could help him in the 2020 election.

A fourth witness, Ambassador Kurt Volker, was an instrumental part of the parallel foreign policy for Ukraine run by Trump’s personal lawyer, Rudy Giuliani — although Volker said he didn’t know in real time the object of their work was to get the Ukrainians to help Trump politically.

As for the current and former White House officials, each was concerned — but they did not agree on why or what action should result.

“Frankly I couldn’t believe what I was hearing,” Vindman said. “It was probably an element of shock that maybe, in certain regards, my worst fear of how our Ukraine policy could play out, was playing out — and how this was likely to have significant implications for U.S. national security.”

Vindman reported his concerns to White House lawyers with whom he already had a channel open from an earlier, related episode, as well as a few other people inside the government — one of whom may have blown the whistle on the whole story.

Jennifer Williams, a foreign service officer detailed to the staff of Vice President Mike Pence, said she found the call “unusual and inappropriate” but said she didn’t hear a “demand” from Trump.

Tim Morrison, a former policy specialist who served as Vindman’s supervisor, told lawmakers that what worried him were the political consequences that could result if Trump’s remarks became public.

Here are other key moments that stood out:

1. Trump was briefed about “corruption” — but didn’t mention it

Vindman’s duties included helping prepare materials for use by Trump when he speaks to foreign leaders. The ones compiled for Trump’s calls with Zelenskiy included mentions about corruption-fighting in Ukraine, Vindman said.

But as Democratic counsel Daniel Goldman established, Trump didn’t mention corruption-fighting on either of the phone calls they heard — even though an official account of the first one suggested the two leaders did discuss it.

Trump and supporters have said since the Ukraine affair blew up that the White House froze assistance to Ukraine was about concerns over “corruption,” even though the Defense Department and other agencies certified beforehand they were satisfied enough to release the aid.

Vindman’s testimony reinforced that although some administration officials focused on corruption in real time this year as key events were playing out — the president then didn’t.

Democrats slammed Trump last week for criticizing an impeachment witness on Twitter even as she was appearing before the House Intelligence Committee live on TV. But the president was undeterred and, over the weekend, faulted Williams in another tweet.

She was asked about that on Tuesday.

“It certainly surprised me,” Williams said. “I was not expecting to be called out by name.”

Rep. Jim Himes, D-Conn., repeated earlier criticisms of the president and echoed the prospect that Democrats might take Trump’s posts into consideration when they draft articles of impeachment.

“It looked an awful lot like witness intimidation and tampering, and, in effect, an effort to try to get you to, perhaps, shape your testimony today,” Himes said.

3. Lawmakers clashed over testimony about the whistleblower

Vindman had talked with White House attorneys after a July 10 episode involving prospective Ukraine investigations. He returned to the same lawyers after Trump’s July 25 call.

Vindman told members of Congress he then communicated with a few other people about what he’d heard, which he called part of his job coordinating policy with the State Department, intelligence community and elsewhere.

Intelligence Community Ranking Member Devin Nunes, R-Calif., asked Vindman to identify those with whom he spoke in the intelligence community, but Vindman’s attorney intervened, as did Chairman Adam Schiff, D-Calif.

The strong implication from the exchange was that Vindman spoke to the person who later filed the complaint to the intelligence community inspector general that animated the Ukraine affair — and which has been largely borne out by subsequent witnesses.

Schiff was unmoved and stopped subsequent attempts to ask Vindman the same question. The whistleblower is entitled to remain anonymous, the chairman said.

Rep. Jim Jordan, R-Ohio, said the exchanges exposed that Schiff must know who the person is — as, Jordan suggested, must others — despite their denials.

Translation: Schiff and Vindman must know, per Jordan, in order to know not to answer the question.

4. Members tussled over the facts and alleged crimes

Few of the underlying facts in the Ukraine affair are in dispute, including by the White House or its supporters.

And Rep. Elise Stefanik, R-N.Y. restated on Tuesday that for all “the hysteria and frenzied media coverage,” the frozen aid for Ukraine was ultimately released and no political investigations ultimately were undertaken.

What began as an investigation into an ostensible “quid-pro-quo” has changed into one over alleged “bribery,” he said, citing press reports that polls showed that phrase tested better with voters.

“It’s bad enough that the Democrats have forbidden White House lawyers from participating in this proceeding,” Ratcliffe said. “It’s hard enough to defend yourself without your lawyers present. But what’s even worse is trying to defend yourself against an accusation that keeps changing in the middle of the proceeding.”

Chairman: We determine the charges

Schiff used an opening later in the hearing to respond.

“Bribery does involve a quid pro quo,” he said. “Bribery involves the conditioning of an official act for something of value.”

Schiff said thing of “value” could include a meeting with Trump or the roughly $400 million in U.S. assistance for Ukraine the White House froze for a time this year. The reason for the paucity of the term “bribery” in witness testimony, he said, was that witnesses were there only to say what they know.

“It will be our job to decide whether the impeachable act of bribery has occurred,” Schiff said.