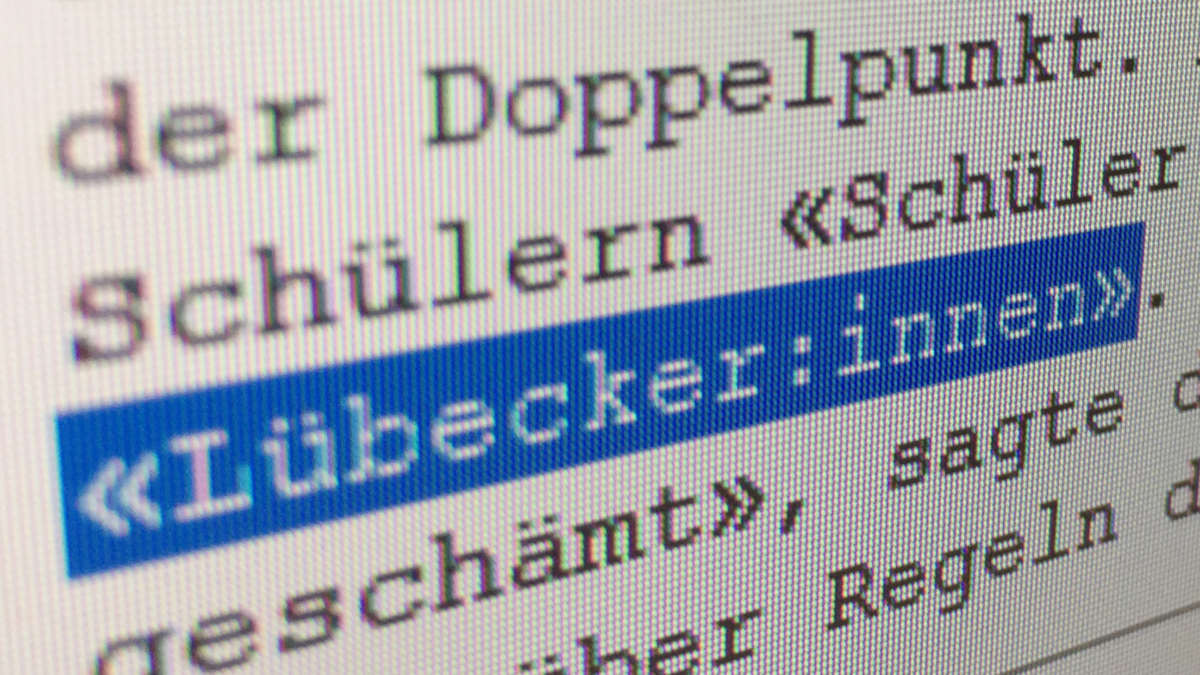 In the German language, nouns themselves are often gendered. Cities across Germany, including Lubeck, are now trying to use gender-neutral language by placing a colon or asterisk within words.
Image credit: Marcus Brandt

HANOVER, Germany — How do you pronounce a word with an asterisk or a colon in the middle? And what’s the German word for inclusivity? These are just two questions businesses and organizations in Europe’s largest economy have been asking themselves as the country tries to advance gender equality.

In Germany, the debate about gender-neutral and inclusive language is complicated by grammar. Just as in many other languages, gender in German isn’t denoted by personal pronouns alone. German nouns that refer to people have traditionally been masculine or feminine. So, a male citizen is a Bürger and a female citizen is a Bürgerin. But in the plural, the masculine is traditionally used by default — a point that’s been contentious at least as far back as the second wave of feminism in the 1960s.

In 2018, a new federal law stipulated that all forms of ID — from birth certificates to passports — must include three options: male, female and diverse, all of which can even be left blank.

Since then, gender-neutral language has become more commonplace. German airline Lufthansa recently ditched the phrase “ladies and gentlemen,” German scholars are preparing a gender-neutral edition of the Bible and in some cities — like Hanover — there’s an official directive about using gender-neutral words.

Known for speaking Hochdeutsch — considered the most standard variant of German — Hanoverians have been encouraged by city hall to use gender-sensitive language for almost two decades, avoiding the generic masculine whenever possible.

In 2019, Hanover became the first state capital to mandate the use of gender-neutral language in all official communication, from emails to brochures and posters. It deployed what’s known as the “gender star,” an asterisk placed within a noun to indicate it refers to men, women and nonbinary people alike. For instance, the word for all citizens became Bürger*innen.

Annika Schach, who was the city’s communications director at the time, says the new language guidelines have had a mixed reception, but she believes that the generic masculine is passé.

“Using gender-neutral language or the gender star has less to do with wanting to change the world, and more to do with reality,” Shach says. “Society is not only made up of men, but women, intersex and nonbinary people too and the language we use must reflect this.”

But Schach’s message has not reached everyone in Hanover. Hendrik, a lawyer who wouldn’t give his last name for fear of getting in trouble with his employer, says he can’t stand the gender star or any other punctuation marks — such as a colon or an underscore — that are sometimes used to denote multiple genders instead of an asterisk.

“Once you start addressing the third gender, it’s not long until you’re required to address a fourth or fifth and, for me as a lawyer, this gets too complex linguistically,” Hendrik argues. “Legal texts are not there to serve such grievances. There are more important issues in this world.”

He’s not the only one who takes issue with gender-neutral language. When Germany’s Merriam-Webster equivalent, the Duden dictionary, started adding the feminine versions of nouns to its online edition and changing the definitions of masculine nouns to refer only to men instead of everyone, a small but vocal citizen-led group called Verein Deutsche Sprache, launched a petition to “save the German language from Duden.”

Oliver Baer, a retired engineer who is one of the signatories and on the group’s board, says, “Gender mainstreaming appears like a diversion or even like a very selfish, childish need to attract attention.”

Baer argues that language does nothing to fix societal inequities and he can’t abide what he views as jargon. “Women are being called persons with a menstruation background,” Baer says incredulously. “Of course, one can do this sort of thing, but that’s more cabaret than anything else.”

Gabriele Diewald, a linguistics professor at the University of Hanover, disagrees. “The generic masculine is not a grammatical must,” she says. “Claims to the contrary are deliberate attempts to continue marginalizing women and other genders.”

Diewald remarks that while gender-neutral language upsets the tabloid press, other media organizations have encouraged its acceptance.

One of them is Germany’s nightly prime-time television news show, ZDF heute journal. Its anchor, Claus Kleber, was one of the first news hosts to adopt gender-neutral language. Speaking from the city of Mainz, Kleber says: “You get reluctant and rare praise for it, but you get a lot and vehement opposition to it.”

Kleber even articulates the gender star or colon from time to time, which is pronounced by pausing briefly mid-word by way of a glottal stop. But he says he doesn’t judge those who don’t use gender-neutral language, nor does he use it religiously.

“I speak to 4 to 5 million people every evening and they want to be respected,” Kleber says. “There are those on one side of this issue and those on the other side of it, and I want to signal to both sides I am not excluding anybody.”

Back in Hanover, Kerstin Krominga who works in the performing arts, says it’s painfully ironic to see how divided the nation is over an effort to recognize society is not made up of binary opposites.

She says she’s disturbed by how ugly the debate has become. “I’m all for inclusive language, but I encounter a lot of aggression when I use it. Either that or I’m dismissed as being too niche.”

But Krominga says she won’t be deterred from using language that addresses everyone rather than just men.