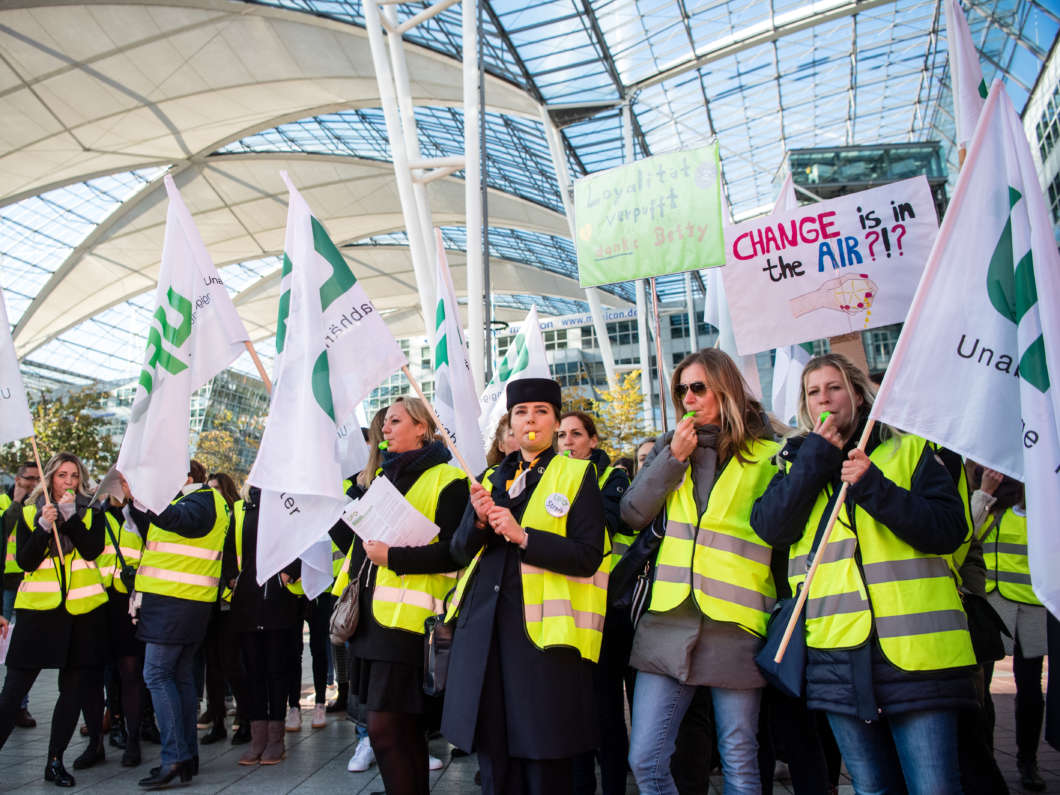 Flight picketing in front of the Munich Airport Thursday, some holding signs with slogans that read "Change is in the air???" Lufthansa has cancelled a total of 1300 flights due to the announced 48-hour strike by flight attendants.
Image credit: picture alliance

Germany’s largest airline Lufthansa has grounded 1,300 flights as the carrier attempts to weather internal turbulence caused by thousands its flight attendants on strike. The walkout, expected to last two days, is impacting travel hubs throughout Europe.

The airlines apologized to passengers for the inconvenience, while the flight attendants’ union, UFO, says the strike was unavoidable because labor negotiations with Lufthansa are at a stalemate.

As NPR’s Rob Schmitz reports, the walkout affects some 180,000 passengers.

“Thousands of Lufthansa flight attendants are striking over pay, pensions and working conditions, and they aren’t planning to return to work until Friday evening,” Schmitz told NPR’s Newscast Unit Thursday.

“Lufthansa and the union representing the flight attendants have been at odds for months over the union’s legal status, and a last-minute effort by the airline to halt the strike failed after a court in Frankfurt confirmed the walkout was legal,” Schmitz said.

According to the English language website The Local Germany, the flight attendants’ union agreed to preliminary talks this weekend, but the strike is not expected to be called off early. The publication adds:

“Lufthansa said it was forced to scrap 700 flights on Thursday and some 600 on Friday, warning that tens of thousands of people will be hit by the action.

“The UFO union said the stoppage would impact all Lufthansa departures from German airports. In the country’s busiest transport hubs at Frankfurt and Munich, a large proportion of planes remained grounded.”

Lufthansa criticized the strike but also offered passengers impacted by the work stoppage assistance rebooking their travel at no cost, according to a company statement.

“The Independent Flight Attendant Organisation (UFO) has called on its cabin crew to go on strike for two days on 7 and 8 November. Lufthansa condemns the strike call in the strongest possible terms,” the statement said. “Affected passengers were transferred to other flights free of charge.”

In a statement issued before the strike went into effect, the flight attendants’ union accused Lufthansa of not working with them earlier to head off the labor impasse.

“Instead of averting the strike, plans were changed on a massive scale and additional standby services were acquired for the day of the strike,” the statement read.

Other airlines Lufthansa operates including Austrian Airlines, Brussels Airlines and Eurowings will not be affected, according to the BBC.

While cabin crews picketed outside airports around Germany, Lufthansa also announced Thursday plans for a new round of cost-cutting measures as it tries to compete with low-cost airlines.

The Reuters news agency reports the new budget cuts will focus on three of its airline carriers, including its Lufthansa Cargo business. This follows the company’s June announcement of a turnaround plan for Eurowings, one which Reuters reports “was paying off as third-quarter figures beat forecasts.”